To the theater — in NYC and elsewhere 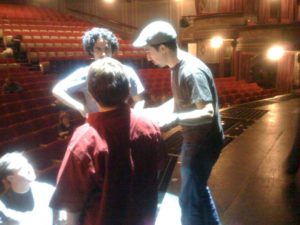 The suburban New Orleans fifth-grader was so taken with the music from the Tony-winning “In the Heights” that he asked his mom to film him performing one of the songs so that he could post it on YouTube. His biggest fan turned out to be Lin-Manuel Miranda, the composer/lyricist and star of the hit musical, which he first wrote while still a sophomore in college. “I didn’t know Broadway shows could have rap,” said Nicholas. “I didn’t know it was that cool!”

“In the Heights,” a musical like no other, tells the story of young Hispanics in a working-class New York neighborhood who grapple with their history, their community and their future with a mixture of rap, hip-hop and reggae music. “This is very powerful for kids,” says Mandy Gonzalez, who plays Nina, the young woman who leaves the neighborhood for Stanford — her parents’ dream — and stumbles. “Kids wait at the stage door and tell us this is their story!”

Nicholas did more than that. On his recent trip to New York with his mom, Theresa, a teacher, he not only got to see the production (and other musicals, as well) but he was invited on stage between performances to do a number with the cast. “It was really, really fun, a lifetime experience,” he told me.

“His feet are still three feet off the ground,” said his mom, several weeks after their New York trip.

Despite the economy — or maybe because of it — there’s no better time for families to check out The Great White Way and as Nicholas Dayton’s experience proves, there’s no telling what can happen. And it won’t cost you as much as you think.

The Broadway League has just announced that the Kids’ Night on Broadway program (www.kidsnightonbroadway.com), which enables kids 6 to 18 to see a participating Broadway show free with an accompanied adult, will now be available year-round on the first Tuesday and Wednesday of every month. Tickets also include pre-theater parties, restaurant and parking discounts and more. The first Kids’ Night on Broadway will kick off Feb. 3 with a pre-theater party at Madame Tussauds in New York (You can also buy tickets at www.broadwayoffers.com or ticketmaster.com using code KNOBO9)

Remember that winter months are the cheapest — and least crowded time — to visit New York, with hotel rates at some places dipping under $100 a night, thanks to a www.hotels.com promotion that enables you to save 30 percent on a three-night stay (book by Jan. 26). Apple Core Hotels’ (http://www.applecorehotels.com/promos/toysrus09) five NYC properties are offering a “filled-with-love” package for $159.99 that includes making a stuffed animal at Toys R Us and breakfast.

For tiny, albeit hip, rooms (some with shared baths) under $100 check out Pod Hotels (www.thepodhotel.com) and in the Village, The Jane Hotel (www.thejanenyc.com) where tweens will probably like the tiny rooms designed like old-fashioned train cabins. If you can afford to splurge a bit, look for third-night-free deals at luxury New York hotels (www.nycgo.com/thirdnight).

Visit the second half of January and you can eat cheaper too. From Jan. 18 to Jan. 23 and Jan. 25 to Jan. 30, more than 250 restaurants will offer three-course prix-fixe lunches for $24.07 and three-course prix-fixe dinners $35, excluding beverage, tax and gratuity, of course (www.nycvisit.com). This makes it an ideal time to introduce your tweens to “fine dining,” or any of your kids to cuisine they may not otherwise have tried.

The theater is one splurge worth making, I think, and other parents clearly agree. A Broadway League spokesman noted that last season saw the largest percentage of kids and teens in the audience in the past 30 years. Such experiences, we know, can encourage a life-long interest in the theater and arts.

There are also more productions appealing to kids of all ages, starting with Disney’s “Little Mermaid,” which just celebrated its one-year anniversary, (we met a group of giggling 6 year olds who thoroughly enjoyed the performance), “Mary Poppins,” “The Lion King” and the just opened “Shrek the Musical.” (www.shrekthemusical.com), (www.Disneyonbroadway.com).

There’s plenty for older kids too, including, of course, “In the Heights,” the new hit “Billy Elliot” about a British working-class boy who yearns to be a ballet star, and fan favorites like “Wicked.”

Check out the Theater Development Fund’s TKTS booths in Times Square, South Street Seaport and Downtown Brooklyn where you can score day-of-show tickets as much as 50 percent off. (Check www.tdf.org to see what has been available recently and read the teens’ take on theater.)

Stop in at the Times Square Information Center (www.timessquareny.org) where you might find some school discount offers for Broadway productions and you can get all your theater questions answered and buy tickets at the Broadway Concierge and Ticket Center.

For those on a budget, bring your kids’ school IDs and you might be able to grab “Student Rush” seats available for $25 at the box office the day of the performance. Many productions offer them — along with same-day lotteries for deeply discounted seats. (Visit www.ilovenytheater.com and click on the show you want to see.)

Wherever you live, there’s nothing like a rousing musical production to chase away the winter doldrums — and worries. There are more than a dozen Broadway productions now touring and countless opportunities to see a good show. We checked out two of Cirque du Soleil’s (www.cirquedusoleil.com) six productions recently in Las Vegas and Cirque offers children’s pricing on their show “Mystere.” (More about Cirque in another column.)

As for Nicholas, he’ll be back to Broadway — as a star. “My hopes are high but I’m going to work for it,” he says.

Meanwhile, he adds, “If you can go someplace on a trip, go to New York and to Broadway.”