To the world’s best birthday present, the Statue of Liberty 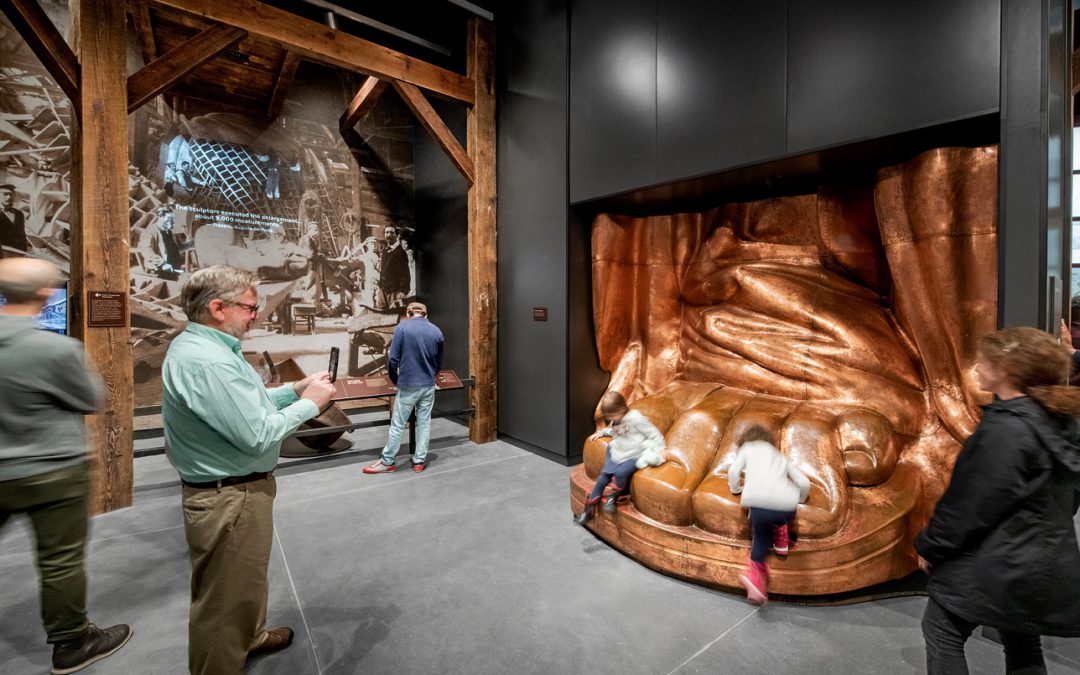 What a birthday present!

The Statue of Liberty was a gift from France to commemorate America’s centennial. Not without strings, though. Americans were tasked with funding the massive pedestal on which she would stand in New York Harbor. But not until the New York World launched a major fundraising campaign did the needed money come in — pennies, nickels, dimes. “I send you part of my Fourth of July ($1) money, If I had as much money as some people, I would give you enough to finish it,” Mary Lowell, 9, wrote in 1885.

Today, of course, Lady Liberty is a worldwide symbol of freedom — no more so than on July 4th. She attracts some 4.4 million visitors annually, more than ever, according to Statue Cruises, which ferries visitors to the Statue of Liberty and Ellis Island, home of the Immigration Museum and historic halls where so many millions passed on their way to life in America. (Share your story of how your family came to America!)

With so much discussion about restricting immigration today and the recent opening of The Statue of Liberty Museum with its green roof and sweeping views of Lady Liberty, the Manhattan skyline and New York Harbor, the biggest addition to Liberty Island since the statue itself, there is no better time to visit.

“The Statue of Liberty Museum makes a trip to Liberty Island an entirely new experience,” said Stephen Briganti, president of the Statue of Liberty-Ellis Island Foundation. “Now, all guests have the opportunity to learn about the statue’s history, why and how she was created, how the people of America helped make it possible, and what the word liberty means to different people.”

The new museum is huge — 26,000 square feet — and features three interactive gallery spaces meant to tell the story of Lady Liberty in new ways. We are reminded that the Statue of Liberty was recognized as one of the greatest technical achievements of the 19th century, a marriage between art and technology.

Visitors start at the Immersive Theater for a multimedia experience, complete with a virtual fly-through ascending the statue. Visitors are asked to consider what liberty means today — a free press? Access to education?

In the Engagement Gallery, explore what took place in the Paris warehouse where Frederic-Auguste Bartholdi built the statue with the help of many skilled workmen, who painstakingly created full-scale models of the head, arms, hands and feet, layering wet plaster over wood, ultimately calculating some 9,000 individual measurements on each section.

Did you know Bartholdi used his mom as the model for the Statue of Liberty? In the Inspiration Gallery, visitors are invited to express their views by adding a self-portrait to the growing digital wall called Becoming Liberty.

Perhaps the best part: the chance to get up close to the original torch, which was replaced in 1986.

Access to the museum is free with the purchase of a ferry ticket to Liberty and Ellis Islands. You can buy ahead, a good idea especially in summer, from Statue Cruises, the official concessioner to the National Park Service. (Ferries run every 20 minutes between 8:30 p.m. and 5 p.m. in summer (starting at $18 for adults, $14 for seniors and $9 for kids 4 to 12). Kids under four are free. Ferries depart from Battery Park in New York City and Liberty State Park in Jersey City. If you hope to climb to the crown — 354 steps from the entrance to the top — book your tickets months in advance.

Consider anchoring your stay downtown when you plan to visit Big Apple sites like the Statue of Liberty, the 9/11 Museum and Memorial and the spectacular views from the One World Observatory, the Seaglass Carousel in Battery Park, the Tenement Museum, which explores immigrants’ stories, as well as Brooklyn. (The all-suite Conrad New York, for example, has a Save up to 50% off Sundays package where if you stay Friday and Saturday night, Sunday is available at 50 percent off. The Marriott Downtown is two blocks south of the World Trade Center.)

My Kid’s Guide to New York City — now in its third edition — can help the kids lead the way; Rizzoli New York has just published “The Statue of f Liberty: The Monumental Dream.”

Bartholdi spent more than 20 years on the project. Kids and adults will enjoy deciphering all of the symbolism. The seven rays on the crown, for example, represent the seven seas and seven continents. The tablet she holds is engraved with the date of American independence. Her torch suggests she’s lighting the way to freedom while the broken chains at her feet symbolize the emancipation from slavery and the end of tyranny.

But that symbolism can take on different meanings, “At times the Statue represents strength and resilience. At other times, it is a reminder of injustice. … To many people, the Statue represents the United States — its possibilities and its traditions, to others, it is a universal symbol of the continuing quest for liberty,” the museum signage notes.

At the time of the dedication, suffragists fighting for the vote for women suggested the “delightful inconsistency” of erecting a female Statue of Liberty “where no woman has political liberty.”

“I would never know what this statue meant to others,” famed African-American author James Baldwin said in 1984. “She has always been a cruel joke to me.”

From 1886 to 1924, approximately 18 million immigrants entered the United States through New York. “But for those people who have felt unwelcome or have been turned away, the Statue’s image reflects intolerance, exclusion and unfulfilled promises,” the museum acknowledges.

That is no more true than today. Happy Birthday, America!