Touring the famous Louvre in Paris with a family-oriented guide 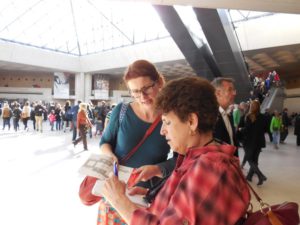 DAY 2 — Paris — What a rock star! The crowds are so thick in front of the Mona Lisa in Paris’s Louvre that you can’t get close without pushing.  People seem more interested in photographing themselves next to the Lady with the Most Famous Smile in the world than in looking at the painting.

“It’s always like this,” sighs Isabelle Southgate, our guide from www.localers.com who specializes in family tours of Paris and develops special family tours. Eighty per cent of her clients are American families.  She notes that most guides, while true experts in their field, aren’t often as willing to play to the kids’ interests so when booking a guide, it is key to make sure they appreciate that kids’ may not have as long attention span.  (I’m glad we have our Paris Pass that not only gives us admission but enables us to avoid the long lines.)

Southgate is always armed with crayons, sketching pads and even a paper box they can fold into a box after seeing the statue that once held the heart of King Henry 2, the wife of Catherine of Medici, who was tragically killed in a jousting match at the age of 40.  Some medieval French royalty, she said, might have three separate graves—one for the body, for the heart and for the guts.  (Kids love those details!)

When she takes families to see the Mona Lisa, she encourages kids to scoot up to the front of the crowd.  “People are usually kind,” she says.  She also urges them to think about what they are seeing. 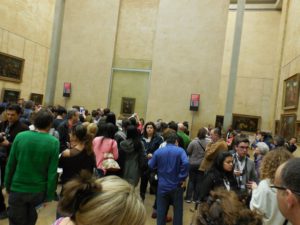 Crowds at the Mona Lisa in the Louvre

Why is this a masterpiece? She asks them

Can you see how her eyes seem to move?

Who was Leonardo da Vinci?

Kids aren’t very impressed by the Mona Lisa, Southgate says.  “She is so famous they expect something much larger.”   She’s not very pretty nor very bright. The Mona Lisa, after all is rather small and dark. And she isn’t very pretty.  Many, in fact, believe Leonardo da Vinci used his own face as the model for Lisa Gherardinni, the wealthy wife of the Italian who commissioned this painting.

Certainly it was one of Leonardo’s favorites.  He traveled with it for years, working on it until his death in France.  That’s why, Southgate says, the painting is here rather than in Italy.  Leonardo died while in France and it eventually hung in Versailles, property of the king of France.  After the revolution, along with other treasures belonging to the nobility and the church, it was brought to the Louvre.  For the first time, the public could see the treasures so carefully hoarded for most of history.

Kids also love the story of how the Mona Lisa was stolen in the early 1900s and spirited to Italy—by an Italian who thought it belonged in Italy.

They like the Winged Victory of Samothrace dating back to 190 BC without its head and a hand displayed separately.  We couldn’t see her because she is currently being refurbished.  They also like the Venus de Milo—without her arms, giving you a chance to discuss why these parts aren’t replaced. 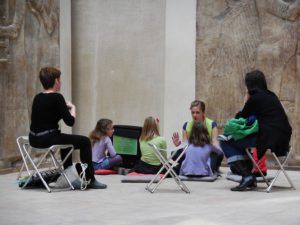 Today, of course, she is the top attraction in this massive museum and likely in all of Paris.  The Louvre, Southgate concedes, can be overwhelming, and sometimes crowded like on this Sunday afternoon in the middle of a school break period.  It is the largest museum in the world with some 35,000 exhibits is overwhelming for adults, much less children.  There are audio guides, of course, and special children’s programs but mostly they are in French; you need to plan far ahead to schedule in English.  There are many activities here Wednesday afternoons, when French Children are out of school.  By the way, all children under 18 are free!

Before we get to the art, the place is of course a history lesson.  It was a fortress and then a palace.  The walls and ceilings are incredible—painted and decorated with gold.  One room was actually the king’s stable.  She points out decorations on the ceiling about horses.  In those days, it had a sand floor!  We love the glass pyramid built in 1989 and controversial at the time and today tourists love the shopping mall that has grown up below it.  (There’s a separate kids’ Louvre bookstore here as well as an Apple Store, Starbucks Coffee and everything else you can imagine.  The pyramid was built to commemorate the 200th anniversary of the French Revolution.  And it was after that of course that the Louvre, where kings had lived became a museum, where working artists could study and learn and the  public could see the treasures that before had been secreted away in palaces.  “The Louvre is a symbol of freedom of the arts and of all the history of France concentrated in one place,” she said.

We see some of the walls from the original fortress.  Southgate points out the hearts and circles on some of the stones.  They were the stonemason’s marks, she said.  Typically, they would have been turned inside but because these walls were underground, no one cared.  Kids can have a scavenger hunt here!

The way to do it says Southgate is to plan a theme.  “You can’t stop in front of every piece of art,” nor even at every 100 pieces. If a family is religious, maybe it is Italian painting.  Maybe it is Angels?  Maybe it is soldiers for boys?  She took us on an entertaining and engaging tour that compared the ancient Egyptians.  “All kids love mummies” she said.  Kids are fascinated with how the Egyptians buried their hearts, liver and guts in separate boxes in their tombs.  They were buried with mummies of animals—she points out some of cats and even a crocodile—and models of all of their servants. They might even have been buried with a model of their home or business.

In case you are wondering why the huge Egyptian collection, it is because Napoleon had fought in Egypt and during the early 19th Century, anything Egyptian was fashionable.

We check out furniture that would have been buried with them.  Kids love the wooden headrests the Egyptians used instead of pillows and girls are fascinated by the cases for the cosmetics and the jewelry.  So heavy!   We even see a dress found in a tomb dating back to before 1700 BC.

There are ancient dice, lutes, drums and hieroglyphics.  Your name would be plastered everywhere in your tomb—so everyone would know who you are when you arrive in the next world.

Many places, Southgate says, as we relax in the Richelieu Room looking at the famous massive sculptures that once graced the gardens of palaces like Versailles, you don’t need a guide—like going to the top of the Eiffel Tower.  But at Louvre it helps.

She shows us how she encourages kids to do a hunt for the tombs in Medieval France where nobles buried their guts (they buried their hearts and bodies separately).  Hint: look for the stone bag carved on their chest.  How many monuments can you find to a nobleman’s heart?   How many carved signatures of Henry and Catherine’s initials entwined?  How many lions on medieval men’s tombs and dogs on the women’s?

It’s a different way to tour the Louvre.  Truth be told, says Southgate, if families have time for just one museum in Paris, she suggests skipping the Louvre in favor of the Centre Georges Pompidou, with modern and contemporary and pop art   “More Fun,” she says.

And the Mona Lisa will be here next visit.