Two weeks in Alaska: Day One on the road to Camp Denali 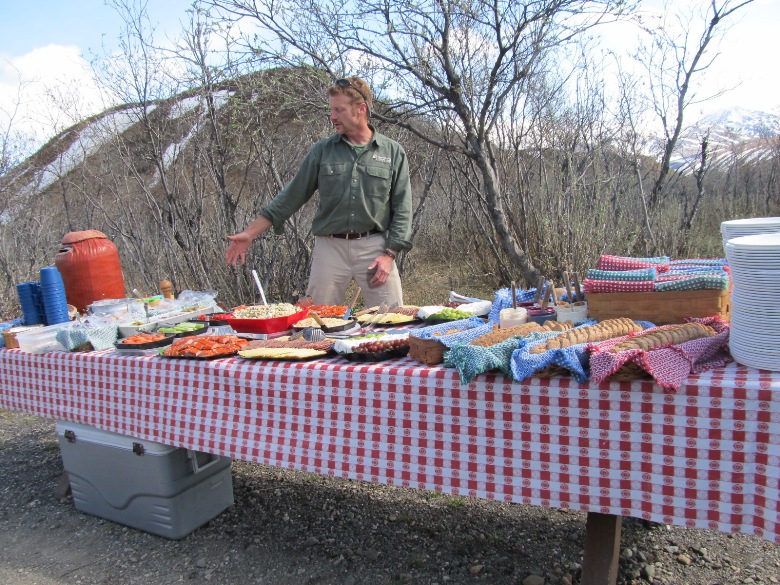 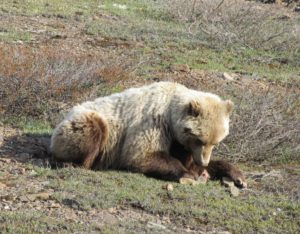 The two Grizzly bear cubs are busy chowing down on a root called in these parts Eskimo Potato, oblivious to the bus full of shutterbugs a few feet away.

We’ve already seen a huge Grizzly munching on a ground squirrel, four Dall sheep, Caribou (get a load of those antlers that grow an inch a day in summer! There is a herd 2,200 strong in the park!), a moose and two recently born calves, a red fox …and we’d only been in Denali National Park a few hours.

Fun fact: Unlike other species, both male and female Caribou have antlers.

Fun fact 2: Denali’s bears don’t grow as large as those in Southeast Alaska because they eat greens and roots and berries as opposed to gorging on salmon.

Only one road leads into Denali’s six million acres and after mile 15, the road is restricted to park buses. Because we are staying  95 miles deep in the park at Camp Denali , one of just a few   remote lodges  and six campgrounds inside the park, we are on a special  Camp Denali bus driven by engaging naturalist Drew McCarthy, a middle school teacher in the winter who keeps up a commentary about the wildlife, geology and fauna the whole way.

We are blessed with a sunny day. Still the Great One, as Athabascan native people call Denali (but by federal law is named Mt. McKinley), is shrouded in clouds. It is the tallest mountain in North America—20,300 feet. As we are making our way deep in to the park, some 300 climbers are on the mountain, trying to reach the summit. Already six have died this season. Winds can reach over 100 mph and temperatures can drop below 70 degrees below zero.  An 11 year-old has reached the summit; so have those in their mid seventies.

We’re here to hike, not mountaineer and to celebrate Camp Denali’s 60th anniversary.  It is a unique and iconic spot—on my top ten of hotels I’ve visited around the world.  “That may not seem like much in the East,” said lodge president Simon Hamm, who is originally from Rhode Island. “But in the East, you can’t sit down and have breakfast with the Pilgrims or pioneers like you can here.”

We have already traveled 237 miles from Anchorage by bus this morning (you can also take the train) after over-nighting at one of my favorite B&Bs anywhere—The Copper Whale Inn in Anchorage after a long day of travel from New York.  Seattle-based Wildland Adventures   helped me arrange this trip, which also will include a small-ship cruise in Southeast Alaska with InnerSea Discoveries. 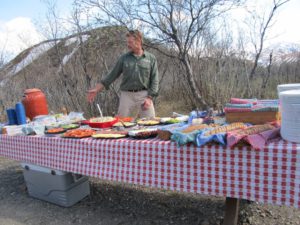 Picnic lunch on the park road on way to Camp Denali

Now we are spending the afternoon and evening traveling  the 95 miles into the park to stay at Camp Denali,  with just 18 cabins and famous views of Mt. Denali from the cabin windows and  even from some of the outhouses  (Yes, we have outhouses and communal showers. Camp Denali’s sister down the road North Face Lodge boasts more conventional rooms with bathrooms.)

The last time we were here was 13 years ago with our kids; now we’ve brought some of my husband’s family to share the wonder.  Wildland Adventures arranged that first trip for us too.

This may be the slowest and most interesting 95 miles I’ve ever driven–a well-maintained dirt road which becomes one way after a certain point. There is no cell service. There is no better way to appreciate the vastness and wildness of Alaska—bear cubs oblivious by the side of the road, so close to the lumbering Grizzly that we marvel at his huge paws and claws as he enjoys every morsel of the ground squirrel. We can count the rings on the Dall sheep’s antlers…We are truly off the grid in this wilderness and it is amazing!

We traverse mountain passes including the breathtaking Polychrome Pass. Above us are snow-covered peaks of the Alaska Range, massive Denali frustratingly hidden by clouds.  That isn’t unusual, McCarthy tells us. “There are only 20 days a summer when you can see the mountain clearly,” he says. The park and peak were named in honor of William McKinley, though the natives never took to that name. The park was established in 1917 with two million acres as a game refuge.  In 1980 the park was expanded to six million acres and Camp Denali and its sister North Face Lodge were suddenly inside the park boundaries. As a result, their well-trained naturalists are the only ones permitted to offer guided hikes off their property and why we are on the special naturalist-led buses rather than the scheduled school buses that travel these narrow roads.

Only 300,000 people visit Denali each summer—only one tenth the number who visit Yellowstone National Park, where we visited last summer.

We learn that 167 species of birds, 39 species of mammals and 754 species of plants live here. We haven’t even gotten to our lodging and we’ve seen the “big four” — caribou, bears, moose and Dall sheep.

Five Dall sheep are just lazing by the side of the road as we cross Polychrome Pass. Limiting traffic to buses clearly reduces the environmental impact and the animals tend to regard the buses as non-threatening, McCarthy tells us.

At 4:30 pm when we stop for a picnic along the side of the Toklat River, it is as  bright as noon (we are so far north that by early June when we are here there is really no darkness).

We feast on home-made rye bread and blueberry jam (made of course with the park’s abundant berries), smoked salmon, reindeer sausage, pickled asparagus, cheese, rice salad. Yum! The setting couldn’t be better—benches made out of logs stretched along the river front.

I’m checking out the excellent Denali Road Guide by Kris Cappas that I bought at the Park Visitor Center.  She has another book called Denali Walks published by the Alaska Natural History Association www.alaskanha.org.  What is special about this place, besides the tallest mountain in North America and all the wildlife, she suggests, is that it continues to flourish on its own largely without human intervention.

The most common day trip is round trip eight hours or to Wonder Lake and back– 11 hours.  We pass those buses on their way out of the park. I’m glad we’re able to stay and explore for the next three days.

As I write this I’m sitting under a handmade quilt in our log cabin at Camp Denali.  There is no electricity, just propane lamps and a pristine outhouse with views of the Alaska Range. Hot showers are in a communal bath house. When we arrived, we were greeted by the smiling staff who served us homemade cake and fruit.  Tomorrow we will have our choice of hikes led by the staff naturalists.

I’m glad we can share this special 60th anniversary of the founding of Camp Denali with the original staff who are back to…more about that later.

Fact 3: Moose are the biggest animals in Denali—weighing 1400 pounds and standing 7 feet tall… They are more than triple the weight of bears here.

Fact 4: Tundra is the land above the trees…From the bus, it just looks like shrubs and small plants.

The birders on the bus were excited when we saw a Golden Eagle—their wingspan is seven feet long! We saw Ptarmigan, loons, ducks, geese and more.

But that can’t compare to seeing the bear cubs. One for the memory books—and our trip to Alaska isn’t even a day old.