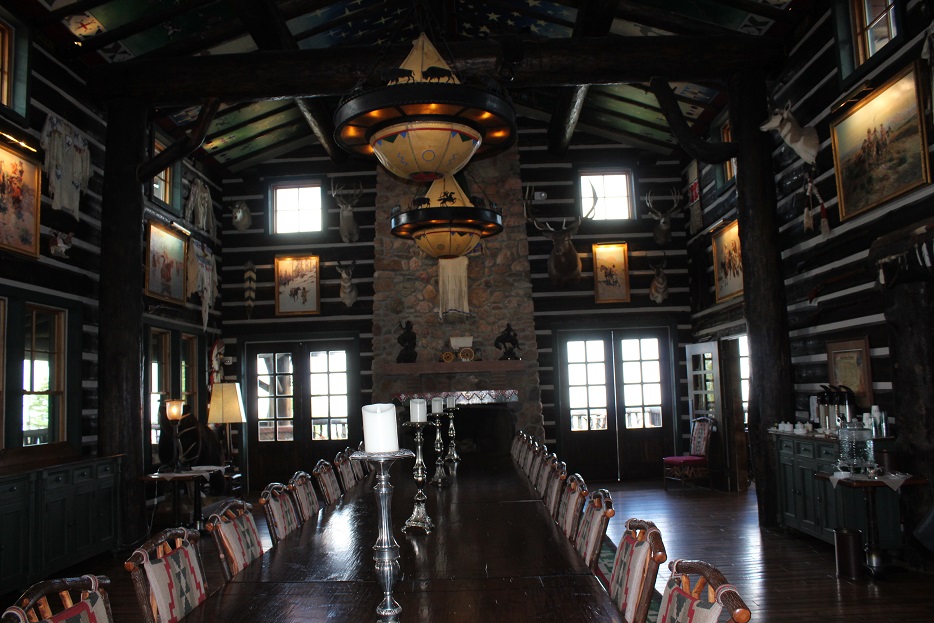 COLORADO SPRINGS, Co. — Where are the clouds?

After all we are at Cloud Camp, about 9,200 feet above sea level above Colorado Springs.

Cloud Camp is the historic Broadmoor resort’s highest wilderness experience. But my daughter Mel and her boyfriend Hank Lockhead – experienced backpackers—think it’s more of a luxury experience with well-appointed log cabins, beautiful bathrooms, gourmet meals, a full bar, Wi-Fi, early morning yoga overlooking the  mountain vistas, always smiling staff, hot tubs in the trees, even a “cooking club” where the chefs and guests cook up something that will be served at dinner at the long communal table..

It is a perfect retreat for well-heeled families with grown or nearly grown kids.   (Prices start at $875 a night for two; a two-bedroom cabin is $1,750 all inclusive). 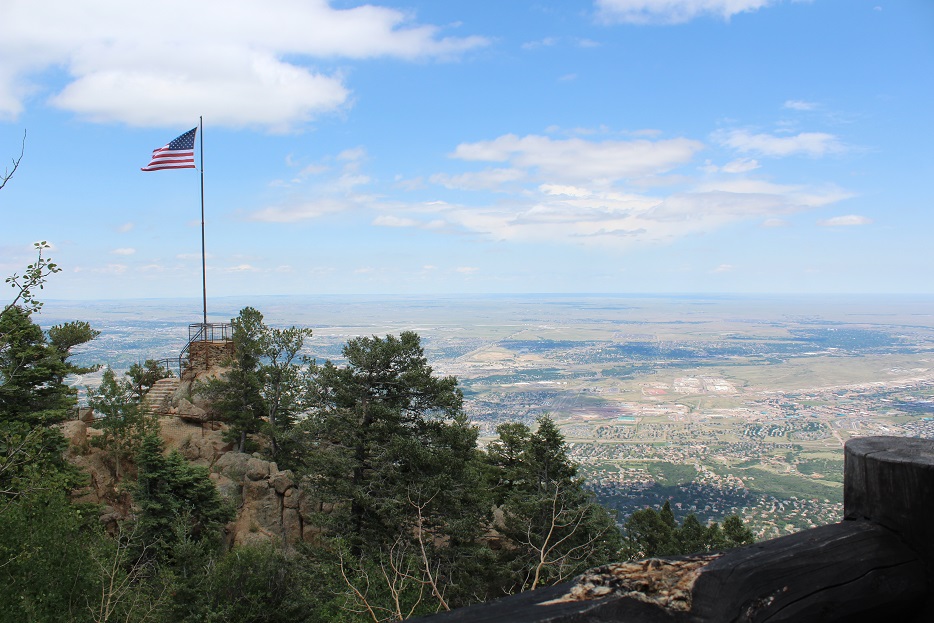 Looking east toward the Kansas-Colorado border from Cloud Camp

The Broadmoor has also opened The Ranch at Emerald Valley, about 30 minutes away, surrounded by over 100,000 acres of the Pike National Forest, where there’s horseback riding, fly-fishing on a mountain lake, mountain biking and plenty of hiking. “More kid friendly,” suggests Mark Streander, who with his wife Lisa Thomassie manages Cloud Camp (the maximum number of guests here is 48) and also works at The Ranch at Emerald Valley.

The Broadmoor has also opened a Fishing Camp on the Taryall River with seven  restored miners’ cabins and five miles of private waters.

From Cloud Camp, we could also hike to The Broadmoor Seven Falls in a 1,250 foot box canyon — with an 180-foot drop of rushing water and two zip line courses that are said to be among the top in the world.

But as we only have two days—Cloud Camp is up a steep winding road on the top of Cheyenne Mountain with unobstructed views of Pikes Pike—we are hesitant to “go down” the mountain, especially as there is so much to do here—horseshoes and disc golf, archery, camp leather crafts and painting, mule rides and of course nightly s’mores by the fire pit. 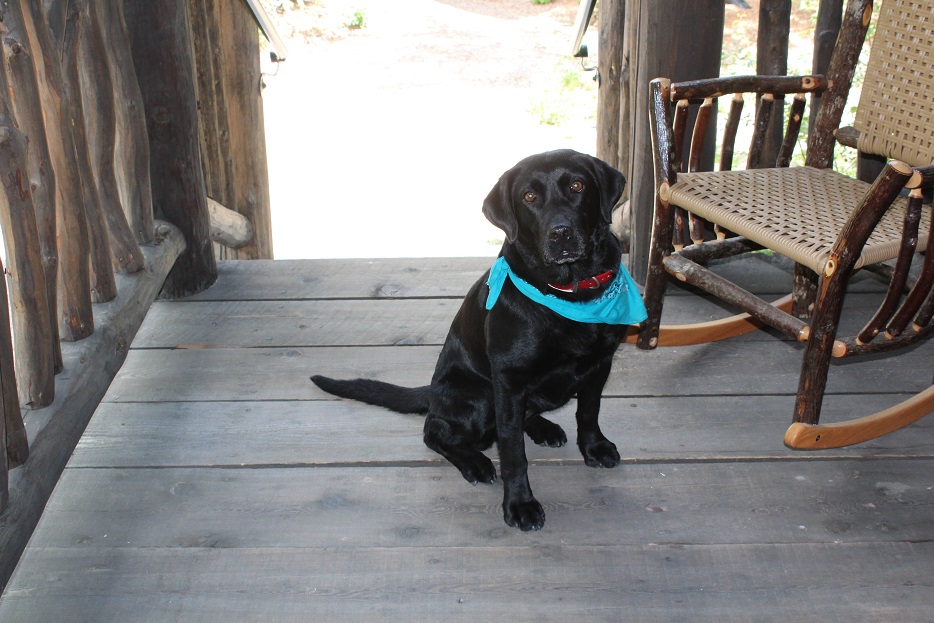 Yesterday when we arrived after the 45-minute ride up the mountain via shuttle from The Broadmoor, Hank and Mel went to the hot tub and my husband snoozed. I went on a hike with Haily Frambach, the resident hiking guide who says she won’t leave this job “till my knees give out.” Since she’s 31, I don’t think there’s a danger of that happening soon.

We hiked just about two miles to an amazing boulder field with giant boulders and small rocks on top, including one that looks just like a frog. The views are spectacular—Colorado Spring’s famous Garden of the Gods among them.

This oasis was built by Broadmoor founder Spencer Penrose, who built the lodge in 1926 and the road as a hunting lodge for his friends where they could also drink during Prohibition. Apparently, ladies were only permitted during the day. The original lodge was adobe and was ultimately demolished in 1978.

It was rebuilt by the current owners of The Broadmoor in 2012-13 and currently Cloud Camp is open from the end of April to the end of October, though there is talk of a special Thanksgiving and Christmas experience here. 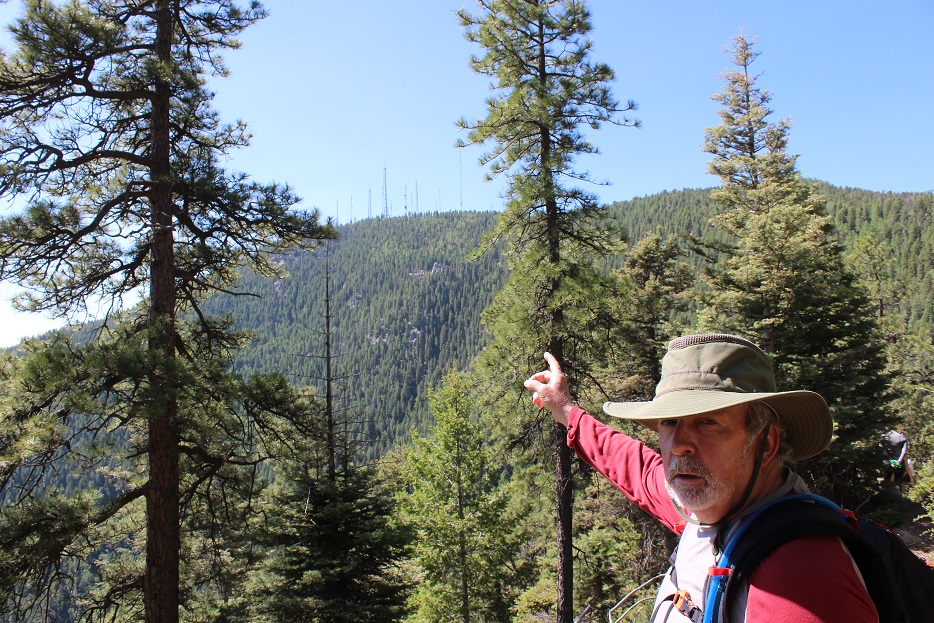 Cloud Camp is situated near the top of Cheyenne Mountain, also famously known at the site of the underground North American Aerospace Defense Command (NORAD) facility (which many people know from its annual tracking of Santa Claus).

As Penrose always had his guests dine together, there is a huge table that seats 32 as well as a wrap around deck, where we had breakfast and lunch,and a sunroom.

We gathered in the Great Room for cocktails (including the signature Moscow Mule made with a local Colorado whiskey) and then settled in for a four course meal including asparagus soup, Colorado lamb, endive salad and Grandma’s buttermilk chocolate cake, among the choices. 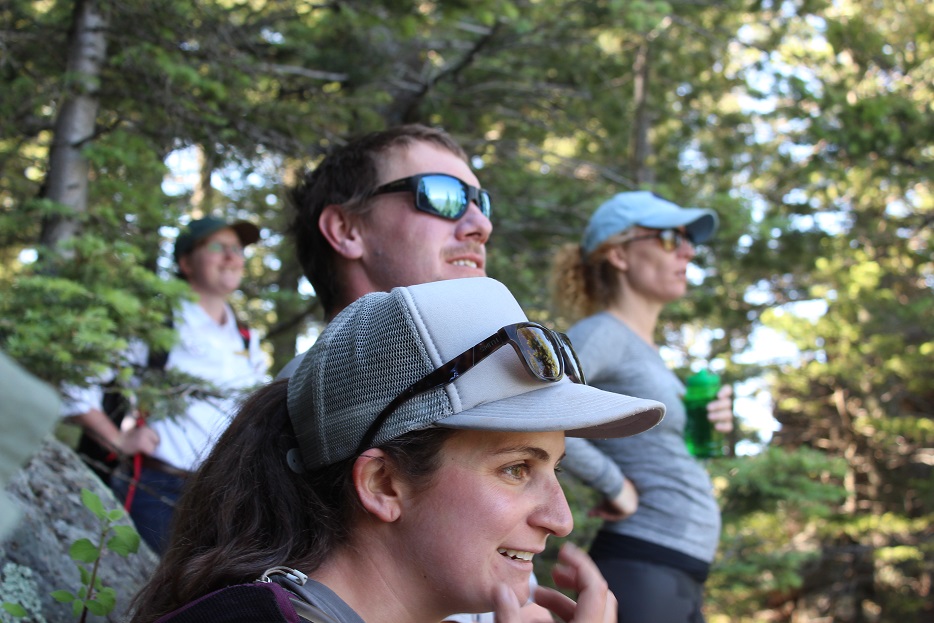 Mel and Hank on our 5mile hike at Cloud Camp

We chated with guests from Texas, Florida and Chicago, as well as a couple who was married at the Broadmoor and are celebrating their anniversary and some who have just come for a weekend respite from Denver.

Karen Wilkins, here with her husband John from Odessa, TX, was literally in tears because they are leaving. They explained that this is “out of the box” from their typical vacations which include three nearly grown kids and resorts like Atlantis.  “But we are going to come back,” said Karen Wilkins. “The fellowship around the dinner table was amazing and it has been so relaxing,” not to mention a lot cooler than Odessa where temperatures were above 100 degrees. 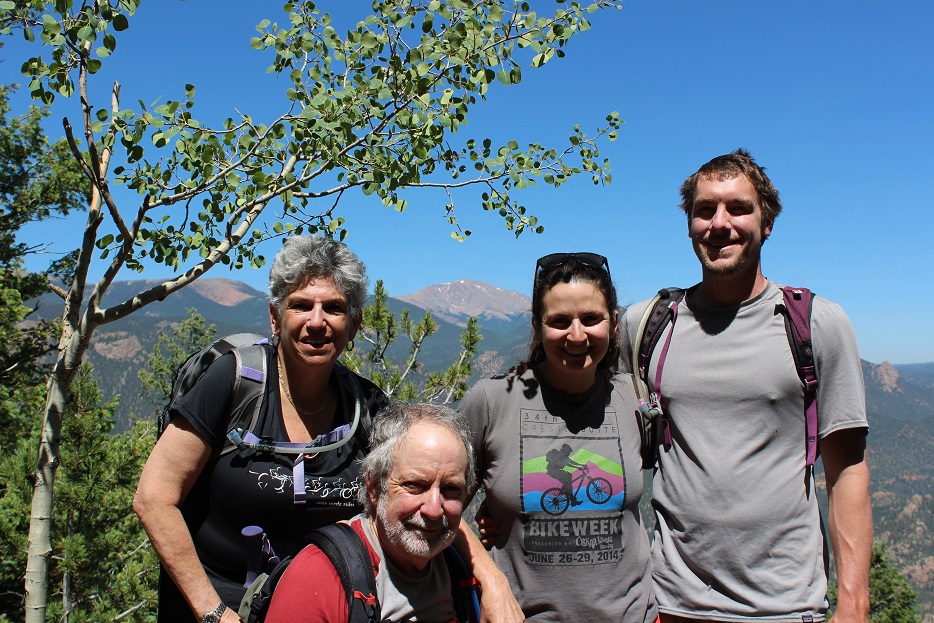 In the morning after a hearty breakfast (think homemade muffins and pastries, eggs and the best hash browns I’ve seen in a long while) we set off on a five mile hike along the McNeil Trail onto the Prospectors Trail where prospectors did look for gold unsuccessfully (plenty of quartz and iron) Up and down some rocks leading to amazing views of Pikes Peak.

I insisted on a family photo. And for once, my daughter indulged me. Thanks Mel!