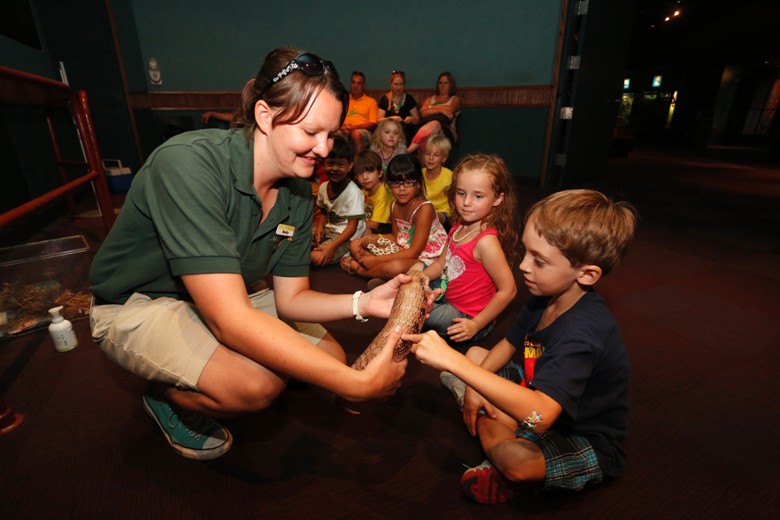 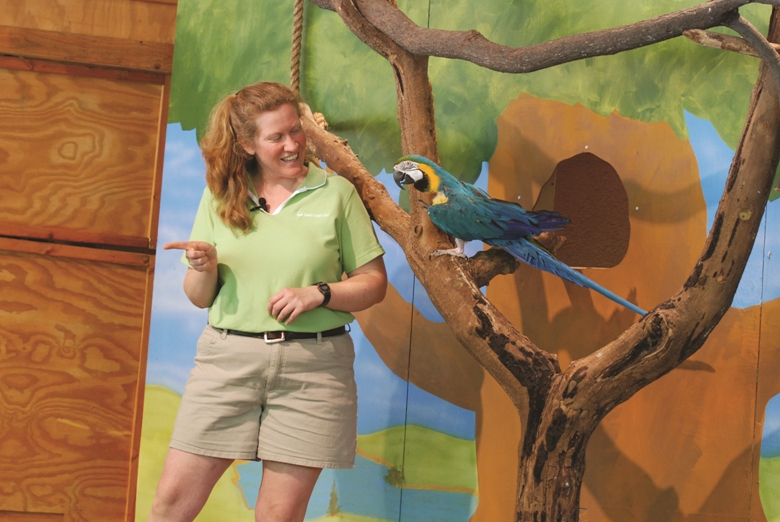 Check out all the kids at play!

The human kiddos laugh and giggle at the antics of the animals all day at the St. Louis Zoo. It’s one of three major free zoos left in the country along with the National Zoo in Washington, D.C., and the Lincoln Park Zoo in Chicago.

Winter, it turns out, is a great time to visit a zoo because the animals tend to be more active, suggests Rob Vernon of the Association of Zoos and Aquariums. He notes that many zoos and aquariums also offer discounts on admission during the winter months and, of course, there are plenty of indoor exhibits, (Tip: If you are a member of your local zoo or aquarium and traveling this winter — maybe to visit Grandma? — check to see if your membership will get you admission where you are visiting. And consider staying in a locally owned hotel, as we did in St. Louis, The Cheshire, where each room is named after a British author and comes complete with one of their famous tomes. The kids will like the scavenger hunt through the hotel’s eclectic decor.)

We were staying just a few minutes from the zoo, so on a rare mild sunny day just after Christmas, we joined local families out to hobnob with the chimps, the rhinos wallowing in the mud, the tigers and leopards in Big Cat Country, the grizzly named Bert who lives in a habitat modeled from limestone along the Mississippi River. There’s even the chance to see more than 100 species of live insects — one of just a handful of exhibits in the country dedicated to bugs.

Was a local zoo important to you growing up? If so, email me your favorite memories at Eileen@ttk-old.o2dev.net. Visiting a zoo can help kids appreciate the importance of conserving the environment and protecting endangered species, experts say. And when you are visiting a different part of the country, a zoo can introduce you to species that call that region home. Before visiting, take a virtual tour with the kids to learn a little about the animals you will meet and decide what you want to see first. See if there are any special family programs or activities that day. (Looking for Spring Break getaways, check out the new Taking the Kids Spring Break section.)

Coming to the St. Louis Zoo has been an integral part of growing up in St. Louis since 1904, when the walk-through flight cage commissioned by the Smithsonian was part of the World’s Fair. Once the fair was over, the exhibit was bought by the city and would become the cornerstone for the St. Louis Zoo in Forest Park. More than 6,000 school kids donated a penny each to pay for the zoo’s first Asian elephant named Miss Jim, who gave rides to thousands. It’s no wonder that the zoo here, as is the case in many cities, evokes such fond memories for kids who visited throughout their childhoods, including my future son-in-law.

The fact that the St. Louis Zoo was free, said his dad, Paul Foldes, made it that much easier to pile the four kids into the car and bring them here — if just for an hour or two.

Today, it’s home to more than 19,000 exotic animals, many rare and endangered, and is one of the top attended zoos in the country with the chance to walk in a tunnel under swimming sea lions, make faces at the monkeys and orangutans, and visit native birds in the 1904 Flight Cage. This spring, the Penguin and Puffin Coast reopens and the McDonnell Polar Bear Point opens in early summer.

Sleeping Under the Skyscrapers at Lincoln Park Zoo in Chicago

I think it’s great that some zoos are still free — no worries if an hour or two are all the kids can take. I have fond memories of visits to the Lincoln Park Zoo — even in the cold Chicago winters — when my three were small. Periodically all winter, there are Animal Enrichment workshops where adults and kids can make edible pinatas and other toys for the animals. (Cost is $5) Go watch them play with what you’ve created! Kids and parents alike love the Pritzker Family Children’s Zoo where you literally take a walk in the woods to see North American wildlife — black bears, red wolves, river otters and inside, owls, snakes, turtles and more. There’s even a treetop canopy climbing apparatus 20 feet high. The zoo, which is located in the heart of Chicago’s historic Lincoln Park neighborhood, dates back to 1868.

In Washington, D.C., of course, everyone goes to the National Zoo to see the resident Giant Pandas, Mei Xiang and Tian Tan, who live here under a Giant Panda Cooperative Research and Breeding Agreement between the zoo and the China Wildlife Conservation Association, and their cubs Bao Bao, born in 2013, and Tai Shan, born in 2005.

But, of course, there’s plenty else to see and do here, including the American Trail, which was once home to a family of wild beavers. Today, you’ll see sea lions, gray seals, gray wolves beavers, a bald eagle and more.

There are also a handful of smaller free zoos in the country, according to the AZA, including the century-old Como Park Zoo and Conservatory in St. Paul, Minnesota, (Bet the polar bears and the penguins like the winter!), the Cape May County Zoo in New Jersey, the Salisbury Zoological Park in Maryland, which offers special workshops for home-schooling families and the David Traylor Zoo in Emporia, Kansas, where you can meet a newly arrived orphaned cougar cub whose mother had been illegally shot. Sad!

The best part about visiting a zoo with the kids — it’s a great place to let them lead the way. Ready?