Biking along the Danube in the summer heat – a miracle! 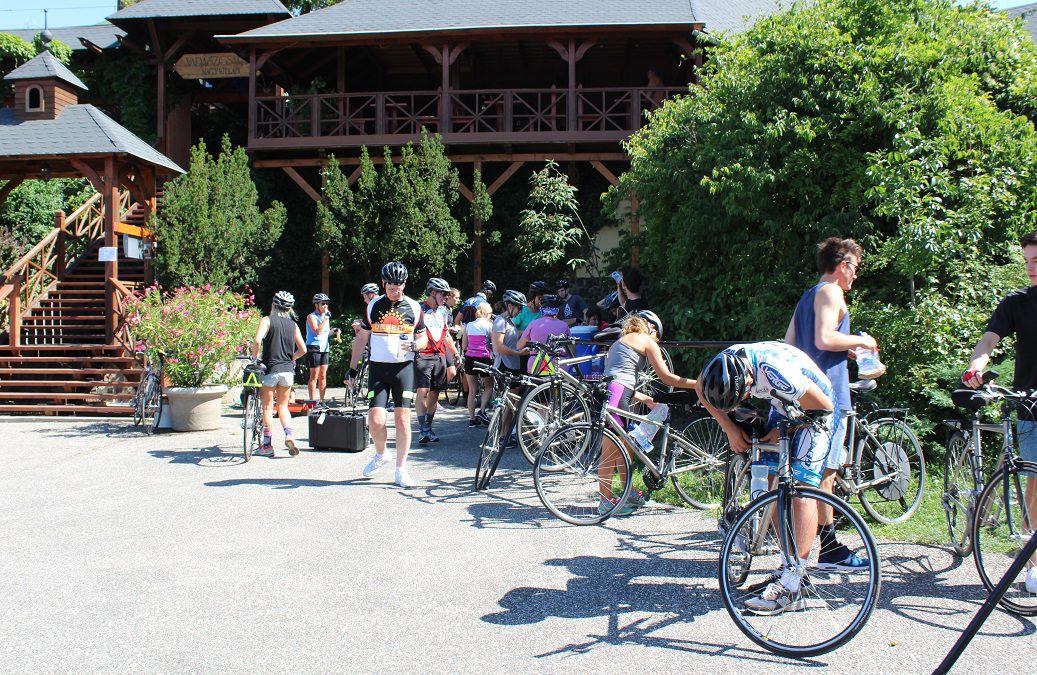 Did I mention it’s 90 degrees?  We try to convince ourselves that is part of the adventure.

We are on the second day of a Backroads “Breakaway Trip” housed on the AMA Waterways AmaStella riverboat docked on the Danube.  While the passengers on board this gleaming boat come from a dozen-plus countries and average ages are in their fifties and sixties, those in our group are all Americans and range from kids who are 14-31 and parents in their 40s, 50s and 60s. Many are veterans of other Backroads trips.

“This is something we can do together and the kids have something active to do every day,” said Lynette Sikand, traveling with her husband Mark and two college-aged sons. The did another Backroads river cruise last summer. Her sons, she said, are still in touch with the kids they met last year on their Breakway trip, who rode together, ate together and hung out together.

We have a mom traveling with her 26-year-old daughter, a dad traveling with his daughter about to head off to her freshman year in college, and a family from Atlanta traveling with grandparents who aren’t doing the biking but can share the river cruise experience.

“I just couldn’t sit around all day on vacation,” said Bill Clemons, traveling with his daughter Jacqueline, about to turn 18. It is their fourth Backroads trip.

“They don’t realize they are on a learning trip,” joked Lynette Sikand, who opted for an electric bike—along with a few other moms—in the hope of keeping up with her sons on the bike rides.

There are also two couples in our group who chose the trip based on schedule.

“The energy is different than on an adult trip,” suggests one of our two leaders, Martina Quintana Madeheim, who has been guiding for Backroads for four years.

The other cruise passengers have opted for a city tour of Budapest. We’ve taken a 45-minute bus ride outside Budapest to Visegard, where we get a  quick lesson in using our Garmin GPS system—today’s ride already programmed—as well as written directions and a map. “Don’t panic if you get lost. It’s part of the adventure,” says our other leader Evan Thompson.

We make sure our water bottles are fill, grab some snacks from Backroads’ copious stash and set off downhill.  I’m admittedly nervous, getting my bike legs, as the “kids.” including by daughter Reggie and son in law Dan, both in their early 30s,  zoom by. “Have fun!” Reg says.

We stop at a famous Danube Bend where the river seems to flow in a horseshoe. After about eight miles, we reach a tiny ferry to cross to the island of Szentendre Island. Our guides take care of everything—including the ferry fare and helping to load our bikes. The town of Szentendre—about 12 miles from where we start–is famous for its baroque architecture, churches, colorful houses and narrow cobblestoned streets home to shops featuring locally made lace, jewelry and various crafts as well as typical souvenirs (paprika maybe?).

It is what I imagine a bike trip should be like—bucolic country side, little traffic, level roads. Then the heat got me. I started to feel ill. I stopped where our guide Evan and my husband were waiting for me. “Drink more water,” my husband Andy urged.

Suddenly, like an apparition but not, a woman’s arm reached through a shrub-covered fence across the road offering a large bottle of ice cold sparkling water. So kind and so refreshing!

We rode on but when we got to the next ferry, I opted for the air-conditioned van for the last mile to our lunch stop. That’s what the vans are there for, the guides and two support staff who drive the vans, told me. Of course some in the group—including my daughter and son in law—opted for eight additional miles before lunch.

Others had struggled with the heat too, telling stories at lunch at a pretty small restaurant called Barczy, where we feasted on chicken kabobs, salad and potatoes (with an equally delicious grilled veggie option for the Vegetarians). Paprika too of course!

“We try to pick places that give you a sense of the local culture,” explained Evan Thomson.

After a bus shuttle back to our ship—which has moved since this morning—we are glad for our comfortable cabins, a shower and the AC.

“We have the feeling of being on the move without the packing and unpacking,” said Quintana Madeheim.

Some of the kids adjourn to the sun deck to the pool; others for a before-dinner nap.

As for me, I think it’s time for a glass of wine.