Blending all generations on Antigua 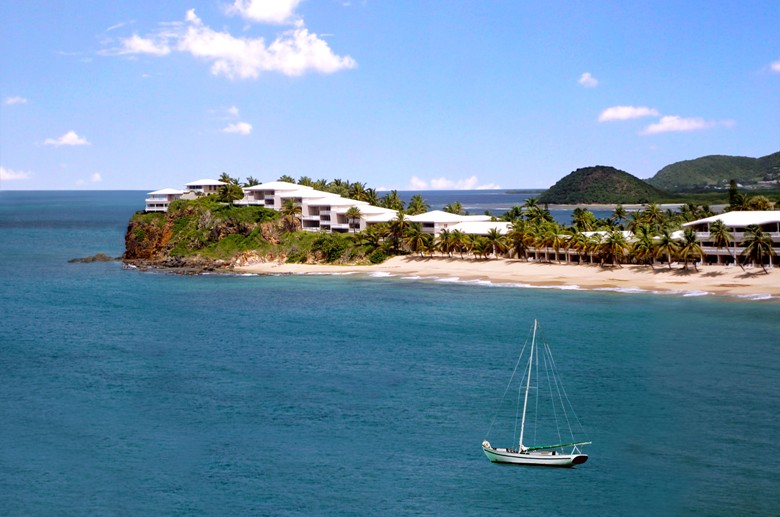 The kids are everywhere.

They’re chasing lizards in the glorious tropical gardens, building sandcastles with resort-provided sand toys, paddle-boarding, kayaking, fishing, playing beach volleyball and basketball and doing cannonballs into the pool. They’re even getting lessons from the bartender in whipping up mocktails.

“The banana smoothies are the best!” an 8 year old named Brady told me.

Talk about kid vacation heaven — Caribbean style. “They really cater to the kids here at Curtain Bluff observes Dr. Tania Spenlinhauer, here in Antigua from Maine with her husband and three kids, including Brady, for her sister’s wedding at the resort. That the small (just 72 rooms) all-inclusive resort offered so much for the six young grandchildren was a big factor in why the family opted to gather here, they said.

“We could even give the older kids some independence because we knew they’d be safe,” said the bride’s mom, Peg Spenlinhauer.

Another mom confides that her son who has Asperberger syndrome is having the vacation of his life, trying things he’s never done like snorkeling. “He is completely relaxed,” she said. “There is no comparison to a regular hotel.”

I can’t help but flash back 30 years when my husband and I honeymooned here. He had found the place in a book, charmed by the story of how the late owner Howard Hulford decided to build a hotel on this peninsula after spotting the land — surrounded by reef — and seeing the two beaches — one tranquil, one with crashing waves.

Seeing all the kids — and their parents and grandparents — having so much fun here recently made me realize that Curtain Bluff is emblematic of how much family travel has changed in the last three decades — and how the travel industry has changed as a result.

On our honeymoon, we sat on the windswept surf beach outside our room — every room faces the ocean — drinking champagne left over from our wedding, watching the crashing waves and talking about the kids we would have and, just as important, the adventures we would share with them. And that, of course, is the sea change resorts like Curtain Bluff have had to face.

“When I was a kid, my parents left us and they went away. This generation takes our kids,” said Steven Rosenbaum, here with his family from Connecticut.

Grandparents too. Alida and Rod McRae have been coming here for 30 years, mostly with another couple and only occasionally with one son or another when they were nearly grown. This summer, they’re returning with all three sons and their families — five grandchildren ranging in age from six to 16.

Kids were not a big part of Hulford’s equation when Curtain Bluff opened in 1962. Wine was (the resort boasts the biggest wine cellar in the Caribbean), so was food. The resort has long been known for its cuisine. Kids were only here during the holidays and sometimes, spring break; some months they weren’t permitted at all. There certainly wasn’t a playground or a kids’ club. The resort wasn’t open in the summer when most families vacation.

Today, you can vacation through July and it’s a bargain, with rates as much as 40 percent lower than winter and free-night deals on certain category rooms. (For more summer vacation ideas in the Caribbean and elsewhere, check out our new Summer Fun section.)

The best part is that parents are guaranteed a break too — maybe a massage at the spa or a soak in the hot tub on the bluff overlooking the sea — because there are some organized kids’ activities and the watchful staff keeps an eye on those old enough to wander on their own. Tired kids old enough to be in their room on their own can even order room service for dinner at no extra charge while parents linger over theirs.

The all-inclusive nature of the resort means the family can enjoy any activity — even scuba diving and deep sea fishing — and eat as much as they like without any sticker shock, which McRae says he’s faced at other resorts when it comes time to pay the bill. (All-inclusive rates for two start at just $625 a night; with kids and teens sharing the room it’s $155 a night). That’s certainly not cheap — this is an upscale resort — but it’s a good value when you realize it doesn’t cost anything extra, even if you go fishing every morning and snorkeling every afternoon; even if the boys order three portions of French toast at breakfast or a double portion of lobster salad at lunch; no matter how many tropical cocktails you drink or how many smoothies the kids order. (And those add up fast!)

The young general manager, Chris Eastmond, himself the father of a 5 year old, says he wants to preserve “the magic dust” that has made so many guests return to Curtain Bluff year after year, while meeting the needs of today’s guests — whatever their age.

They’re ramping up organized kids’ activities (think learning to fish and sailing instruction) and special early kids’ dinners when a lot of children are in house. There are even plans to partner with a local school so visiting kids can learn what it is like to grow up on a Caribbean island. Already on weekends, when local kids come to the resort to learn to play tennis, they meet the guests at lunch. (The most promising tennis players are awarded scholarships to a tennis camp in Maine through Curtain Bluff’s guest-supported Old Road Fund.)

“We want to incorporate what’s new with the soul that is here,” Eastmond said.

That soul is a long-term staff that hugs each guest when they arrive and when they leave. Hulford’s widow, Chelle, still lives on the property and is a constant presence, chatting up the guests and their kids.