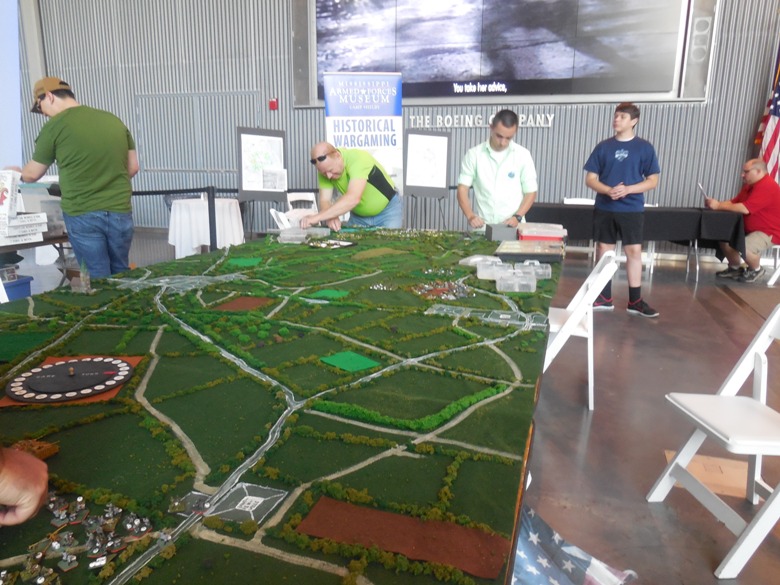 Jack Lucas was just 14 when he lied about his age to join the Marines. Three years later, he won the Congressional Medal of Honor for hurling himself onto a grenade and pulling another under him during the Iwo Jima campaign.

He survived and became the youngest Marine ever to receive the United States’ highest military honor. The wallet he had in his pocket that day tells just one of the many stories at the National World War II Museum in New Orleans.

Fewer than 500 were awarded the Medal of Honor during World War II. You can see all of their faces in one exhibit.

There are dented helmets, letters home, photographs, flight jackets and K rations, complete with chocolate bars and gum. Over 16 million Americans served in World War II and the museum honors all of them — and makes them real for a generation who are too young to know anyone who survived. There’s a Kids Corner on the museum website where kids might make their own WWII-era patch (many are on exhibit, try sending a message with Navy Flags or make a propaganda poster). There’s a scavenger hunt designed for school groups, but that would be fun for any family as they make their way through the museum. How long did it take for Andrew Higgins to design and build this special landing craft? Just 61 hours!

Higgins, we learn, was from New Orleans and had been manufacturing shallow-water work boats to support gas exploration in the Louisiana bayous. He adapted his Eureka Boat to meet the military’s needs for a landing craft. By using Higgins Boats, armies could unload across an open beach and have more options in choosing their attack points. A small workforce of only 75 workers in 1938 grew to over 20,000 by 1943. The Higgins workforce was the first in New Orleans to be racially integrated. His employees included undrafted white males, women, African Americans, the elderly and handicapped persons. All were paid equal wages according to their job rating. They responded by shattering production records, turning out more than 20,000 boats by the end of the war.

This summer, the museum has welcomed its 4th million visitor, leaving, hopefully, with “a greater appreciation for those who served and sacrificed,” said Museum President Gordon Mueller. The vast majority of visitors come from outside New Orleans and the museum has become a top tourist attraction here.

The museum was founded in 2000 as The National D-Day Museum and has been greatly expanded since then. It is still growing. In 2009, the Solomon Victory Theater complex opened, featuring the exclusive 4D film, Beyond All Boundaries, produced and narrated by Tom Hanks. In 2013, the US Freedom Pavilion: The Boeing Center opened with eye level views of WWII-era aircraft.

Later this year, the Museum will continue to tell the personal stories of the war that changed the world with a new exhibit pavilion, Campaigns of Courage: European and Pacific Theaters. Campaigns of Courage will open in two phases, the first being Road to Berlin: European Theater Galleries this December and the second, Road to Tokyo: Pacific Theater Galleries, in late 2015. The next year, the Liberation Pavilion is scheduled to open, exploring the postwar era and the war’s continuing influence in our society and world.

There are oral history stations where visitors can stop to listen to a soldier’s account of D Day, a young woman’s remembrance of the troops leaving the British Coast for the D-Day invasion, “The pageant of history…planes, gliders, ships moving, men moving…” said Mary Verrier

“If we stood there, we were going to die…We were being battered, we just had to get to the bottom of the cliffs,” said Lt. Col Bill Friedman of landing on the D Day Beaches. You can listen to more stories here in the museum’s digital collection. It might be worthwhile to listen to a few of these before visiting.

Currently housed in three buildings, each arranged around central themes of the war, museum exhibits offer visitors an opportunity to experience the war through the eyes of the men and women who lived it with personal vignettes and interactives throughout.   Still, this is the kind of museum you need to explain to your kids as you go along—why we fought this war, how young the soldiers were, the sacrifices at home.

The Education Department offers family workshops throughout the year to encourage kids and their families to explore the life and lessons of WWII. They are designed as fun and educational for children aged 8-12 and their parents or guardians. Get ready for hands-on exploration of artifacts, arts-and-crafts activities, teamwork exercises.

There are also activities to do at home—like Kitchen Memories where kids are encouraged to talk to elderly relatives and friends about their memories about food during World War II in an effort to “gather a nation’s individual and collective memories of shopping, rationing, growing, cooking, serving, and eating during the war from those who experienced these things first hand.“

Local students work at the museum as volunteers on weekends, perhaps showing a teen’s high school year book from the war years to visiting kids or other artifacts, said Colln Makamson, who oversees the family programs.

“We are talking about normal people living through extraordinary circumstances,” he explains.