Take them for some spooky fun and games this Halloween season 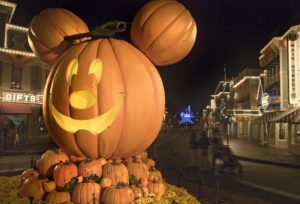 We were so proud of ourselves.

My best friend JoAnne and I fashioned ghost costumes out of old white sheets, corralled my little sister Amy to join us and –presto — we were The Ghost Family. We happily went off trick or treating in our suburban Long Island, N.Y., neighborhood. No parents tagged along, of course, no one had expensive costumes or headed to a theme park fright fest. No one could have imagined trick or treating among giraffes at a zoo or dinosaur fossils at a museum.

Boy, have times changed. Not only would today’s parents not allow kids to trick or treat without adult supervision, but they screen every bit of candy to make sure it’s safe. There’s an even bigger difference: Halloween has become a huge deal, a lot more than an after-dark trek through the neighborhood in homemade costumes. The National Retail Federation says more of us plan to celebrate Halloween this year — to the tune of $5.7 billion. The federation suggests that, this year, Halloween may be just the ticket to escape our concerns about the economy and just have some fun.

This year, there are nearly 2,500 haunted attractions around the country to choose from that offer chills and thrills for most of the fall, says Tim Gavinski, president of the International Association of Haunted Attractions (www.hauntedhouse.com), including his own in Milwaukee (http://www.wisconsinfeargrounds.com/). “We’re picking up more and more every year, and they’re more sophisticated than even five years ago,” Gavinski says, noting there are at least 60 new haunted houses this year, including the largest to debut, Nightmare New England in Litchfield, N.H., (www.nightmarenewengland.com).

Take your pick of Halloween away-from-the-neighborhood-fun: Trick or treat after hours among the dinosaurs at the American Museum of Natural History in New York (www.amnh.org), or explore a “haunted” aquarium in San Diego at the Birch Aquarium (www.aquarium.ucsd.edu). Take a ghost tour of Stowe, Vt., (www.stowelanterntours.com) or one of a New Orleans cemetery with a little voodoo thrown in (www.neworleanscvb.com). New Orleans, by the way, is home to The Audubon Institute, the country’s largest museum devoted to creepy crawlers (www.auduboninstitute.org). Check the Website for the Association of Zoos and Aquariums (www.aza.org) to see what your local zoo and aquarium has planned this Halloween.

Theme Park Halloween extravaganzas from Orlando to California, meanwhile, last the entire month of October, bringing in more than 10 million people and $250 million, says David Mandt of the International Association of Theme Parks and Attractions. Some are designed for the littlest pirates and princesses, like Disney’s Not So Scary Halloween Party in Orlando (www.disneyworld.com), Disneyland’s Halloween Time www.disneyland.com) or Sesame Place’s Count’s Halloween Spooktacular (www.sesameplace.com). SeaWorld in Orlando, San Antonio and San Diego tout special Halloween Spooktacular shows (www.seaworldspooktacular.com) where you can download a Halloween octopus mask. At Hersheypark in the Dark (www.HalloweeninHershey.com), your ticket will also get you in to see Creatures of the Night at ZooAmerica.

Hotels, resorts and entire cities are jumping on the Halloween bandwagon big time. Why celebrate for one evening when you can party with ghosts and goblins for a weekend or more? (Check out www.tripadvisor.com/tankofgas to find five places you can travel on a tank of gas or go to www.kayak.com for places that offer the most Halloween fun.) This season, more than 7 million people will opt for Orlando, the largest Halloween destination in the world, where you can find hotel rooms for well under $100, 75 of them offer free nights (www.visitorlando.com). There’s also a citywide celebration in Chicago called Chicagoween (www.enjoyillinois.com/kidventures) and Seaview Resort near Atlantic City invites families to “celebrate Halloween down by the shore” complete with complimentary haunted hayrides and a pumpkin-carving contest (www.marriott.com). Make spooky s’mores Halloween weekend or see if you can win a costume relay race at Scottsdale’s Westin Kierland Resort (www.kierlandresort.com).

Maybe your kids would like to rub elbows with a ghost, or at least hear ghost stories. Visit www.bedandbreakfast.com and take your pick of inns around the country where you might bump into a ghost or two. There are also plenty of Ghoulish Getaways in New England (www.newenglandinnsandresorts.com), complete with haunted houses, ghost stories, photo ops with giant pumpkins and the chance to decorate Halloween cookies.

Just don’t take the little ones to the theme park nighttime fright festivals. They’re bigger — and scarier than ever. Universal Orlando’s Halloween Horror Nights (www.halloweenhorrornights.com), for example, offer 18 attractions, including eight haunted houses and hundreds of scary characters that roam the streets. Across the country, Universal Studios Hollywood (www.universalstudioshollywood.com), dares you to “live your worst nightmare” with a Terror Tram that stops at the Bates Motel and a new scare zone based on the movie “The Strangers.” At Busch Gardens’ 10th Annual Howl-O-Scream in Williamsburg, Va., (www.howloscream.com) you might end up in a crypt at a ruined Italian palace. (Good thing the Land of the Dragons remains kid-friendly.)

Ready to eat a creepy crawler? If so, you just might win front-of-the-line access at Six Flags (www.frightfest.com).

Let’s not forget Knott’s Scary Farm’s Halloween Haunt (www.halloweenhaunt.com), which celebrates its 36th year of transforming the kid-friendly Southern California theme park into 160 scary acres of fun, highlighting 13 mazes, seven shows and 1,000 monsters that pop out of the fog at you. (Ready to play 3-D laser tag in a maze called Alien Annihilation? How about visiting the Black Widow’s Cavern where an abandoned mine has been taken over by the deadly creatures?

The idea is you’ll be too busy being scared to think about the plummeting Dow or the upcoming election or the war in Iraq or whatever else is keeping you awake at night. And that’s a good thing. Your tweens might actually clutch you for comfort, if they deign to let you accompany them, of course.