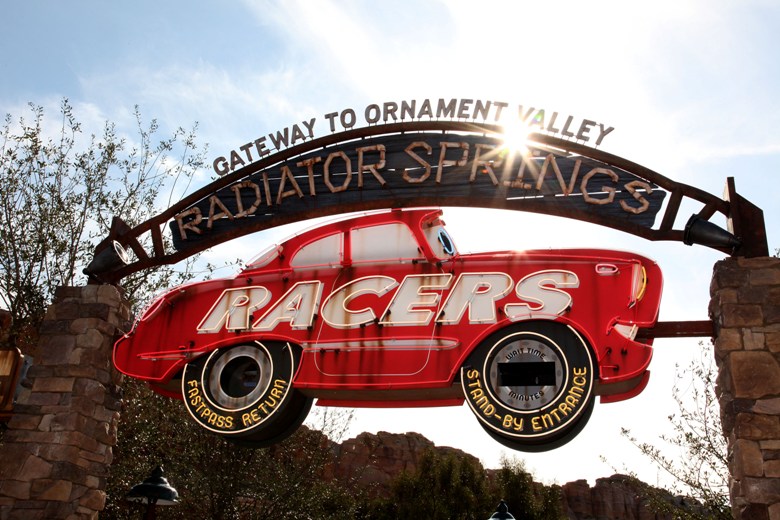 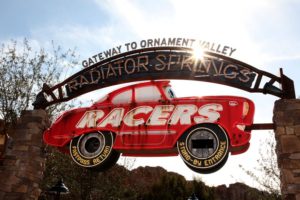 Radiator Springs Racers at the new and improved Disney California Adventure Park is one of the most elaborate attractions ever created for a Disney theme park and it is the centerpiece for the new Cars Land here, which is so popular that parents and kids wait for hours to get in.

For the uninitiated, Radiator Springs is “the cutest little town in Carburetor County” where the loveable characters of the “Cars” movies live along Route 66, that famous stretch of U.S. highway spanning 2,448 miles from Chicago to Los Angeles.

“This is an exact replica of the movie!” said 13-year-old Robert Castillo.

“We took the “Car” story deeper,” explained Kathy Mangum, the Walt Disney Imagineering executive who oversaw the development of the 12-acre Cars Land, complete with a 525-foot-long Route 66. In the movie, Mangum said, you don’t go into the buildings as you do here — from the Curio Shop to Flo’s V8 Cafe modeled after a Texas eatery along Route 66.

“I love it,” said Stephanie Aleman. “It’s a big improvement to the park.”

That was the idea. Though California Adventure Park boasts some of the Disneyland Resort’s most popular attractions — among them Soarin’ Over California, the 4-D “Toy Story” Midway Mania, the high-speed coaster California Screamin’ and Tower of Terror — a visit to this park seemed to leave visitors dissatisfied, Disney officials conceded.

Now, besides Cars Land, visitors can walk in Walt Disney’s shoes — literally — as they enter the park and stroll down Buena Vista Street as it might have looked when a 22-year-old Disney arrived from Missouri in the ’20s with a dream and just $40 in his pocket.

Sadly, many kids don’t even realize Walt Disney was a person, said Lisa Girolami, the senior director of Walt Disney Imagineering, who oversaw the development of Buena Vista Street. “We want to keep talking about Walt as a man … it isn’t just a back story — and that’s what we do — but this is Walt Disney’s back story … he got off the train with a dream and people can come here and can think about how they can make their own dreams come true.”

There is Mortimer’s, which sells healthy eats. (Walt Disney originally wanted to name Mickey Mouse Mortimer but his wife, Lillian, suggested Mickey would be a better choice.) Peek into the window of Trolley Treats at the display of Rock Candy Mountain, an attraction Walt Disney designed for Disneyland but never built.

Goofy, dressed in a zoot suit, entertains the crowd in front of the new popular spot for photos — a statue of a young Walt Disney with his suitcase and Mickey Mouse.

Check out the Red Car Trolleys inspired by the historic Pacific Electric Red Cars with the singing Red Car News Boys and the Carthay Circle Restaurant and Lounge, adorned with historic Hollywood photos, designed to look like the place Hollywood elite would have gone after a premiere. The Carthay Circle Theater, of course, was where the film “Snow White and the Seven Dwarfs” debuted in 1937 — Disney’s first feature-length animated movie and, despite dire predictions, it was such a smash hit that it financed Walt Disney Studios.

Parents will love that they can watch the parade or Disneyland’s fireworks from the Terrace while they sip an artisanal cocktail. They’ll love the sophisticated seasonal menu (watermelon salad and Jamaican Jerked King Fish) and casual ambiance (everyone comes in shorts from the park!) and the fact that the kids’ menus are healthier (think fresh fish and smashed potatoes, sorbet pushpops). Downstairs in the Lounge, share “small bites” (lamb meatballs, anyone?) Many dishes are designed for sharing, notes Executive Chef Andrew Sutton. “Come here and have some fun!”

Certainly, they were doing that in the park. Families oohed and aahed at the evening World of Color spectacular, which offered 1,200 fountains interspersed with their favorite Disney characters, including the latest princess, Merida, the heroine of the new Disney-Pixar film “Brave.”

They laughed at the Mad T Party, with music, games, dancing and the Pixar Play Parade.

“I like this park better than Disneyland,” declared Kirsten Peppers, 10, here for her first visit.

“Plenty to keep you busy for a couple of days,” added Brenda Randolph, here from Salem, Ore.

That’s the point. Disneyland, which boasts many season pass holders who come just for the day, now wants to attract visitors who will stay at one of the resort’s three hotels where they can indulge in a spa treatment or a gourmet meal at signature restaurants like Napa Rose at the Disney’s Grand Californian Hotel and Spa. (For those who want to know everything about this place, check out Chris Strodder’s new “Disneyland Encyclopedia” that includes more than 500 entries, www.santamonicapress.com.)

Adventures by Disney (www.adventuresbydisney.com), which already offers a multi-day escorted trip to Southern California, has added a one-day “Lights, Camera, Magic! Tour to Hollywood,” complete with a visit to the Walt Disney Studios, which aren’t open to the public.

The Disneyland Hotel, meanwhile, has just completed a huge two-year renovation. Kids will love the new water play area and the carved headboards that light up like the fireworks over Cinderella’s castle. (Read my travel diaries of a multi-day visit.)

I love that the entire resort is so navigable on foot. Walk out of the Disneyland Hotel and you’re at the Downtown Disney District with more than 50 shops (design your own custom ride at Ridemakerz), restaurants (I liked the Tapas at Catal), movie theaters and more.

At Cars Land, despite the ridiculously long lines, visitors were all smiles as they soaked up the vibe at the nearly six-acre tour of Ornament Valley, which turns into a race through the mountain range at Radiator Springs Racers (kids love going through Taillight Caverns at the end). There’s also a chance to cozy up to popular “Cars” characters Lightning McQueen and Mater at the Cozy Cone Motel (get everything in a cone from ice cream to chili), as well as DJ’s Dance Party and rides on Luigi’s oversized Flying Tires (tire hats seem the most popular souvenir) and baby tractors at Mater’s Junkyard Jamboree.

Chris Peppers, who is in the Army stationed in Texas, wasn’t complaining. He could have taken his three kids to Orlando for their first Disney foray, but decided to bring them here instead. “This is the original,” he explained.