Visiting a traditional Japanese Ryokan — not your ordinary hotel 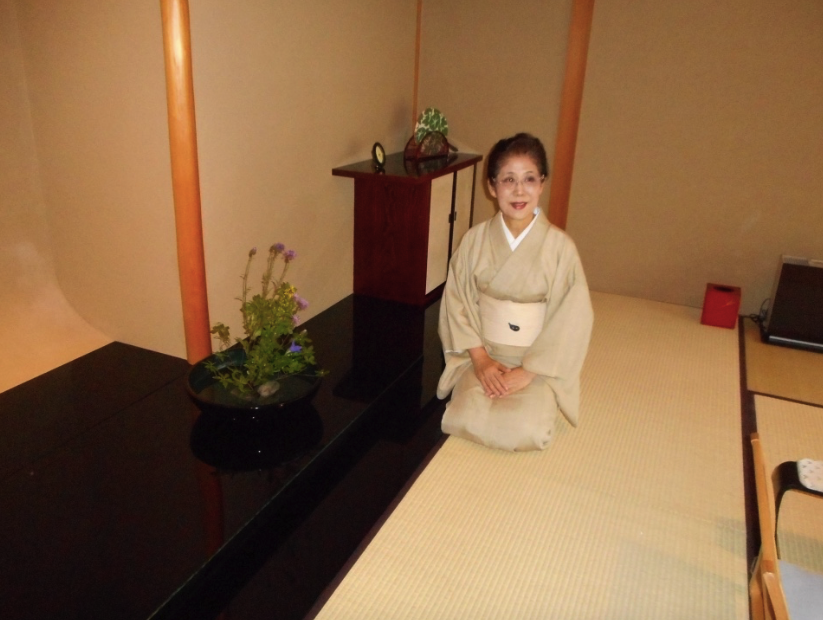 Akemi Nishimura at her Hiiragiya Ryokan in Kyoto

KYOTO, Japan — Akemi Nishimura’s family has been in the hospitality business for six generations, since the early 19th Century. They have been welcoming members of the same families for generations, she said, adding “children are always welcome.”

Western children likely would find staying at Nishimura’s Hiiragiya in the heart of Kyoto an adventure. So would their parents.

Where else would you stay at an expensive hotel and sleep on the floor—well a futon rolled out at night, in fact. You bathe in a deep traditional Japanese bath, showering off with a spray. And dinner would be 10 exquisitely prepared and presented mini-courses (Kyoto Kaisecki cuisine) that are served one after the other, as soon as you are seated. The Japanese think it is rude to expect people to wait for their food so here, they ask you to make a reservation for dinner and show up on time. Same for breakfast. Remember to take off your shoes in your room before stepping on the mats that cover the floor—no carpets here. 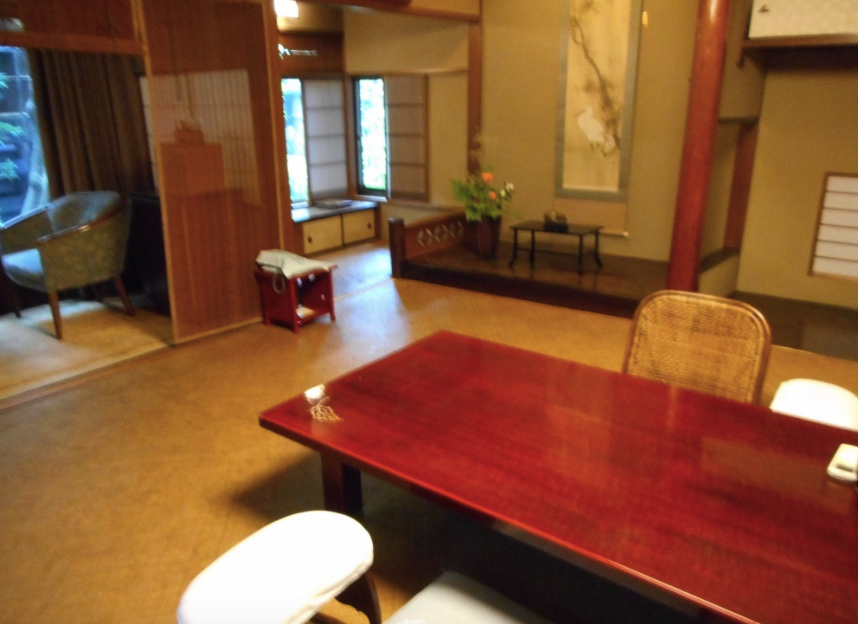 One of the larger rooms at the Hiiragiya

Welcome to the traditional Japanese Riokan. There are these hotels all around Japan, some in the mountains, which offer the chance to try the Japanese hot springs baths called onseng (www.kyoto-Ryokan-en.com and http://www.ryokan.or.jp/english/). Another for top site for Japanese Ryokans is The Ryokan Collection.

For westerners, they are an acquired taste—and can be expensive. The beautiful 28-room Hiiragiya, with gardens that make you forget you are in the middle of the city and beautiful flower arrangements in each room as well as art, charges upwards of $300 per person per night (less for kids) and the rates can go up as high as $900 a night, including breakfast and dinner. The hotel motto which hangs in the front in Japanese says “As if coming home.” And that’s the way the staff want you to feel.

“I tell people if they are going to a Ryokan, go as soon as you can check in and stay until it is time to check out so you soak up the ambience,” said Kyoto art dealer Robert Yellin (www.japanesepottery.com) who is an American but has lived in Japan for nearly all his adult life. 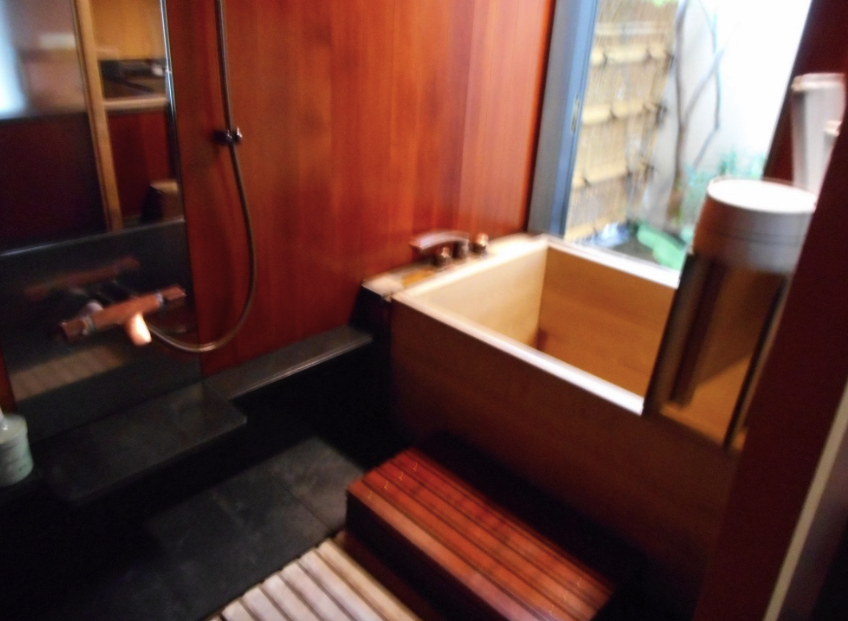 You won’t find many in major cities like Tokyo. Most were destroyed in World War II bombing raids, Nishiura said. All the more reason to preserve the tradition here and in the countryside.

Kyoto, of course is the ancient capitol of Japan and many westerners want to experience a Japanese traditional inn, staying just a night or two, said Nishimura, noting that one of her four children is now working in the business.

She explained that Hiiragiya dates back to 1818 when a family ancestor came to Kyoto and established his residence on this site, inviting business associates to stay from time to time. He believed in the Hiiragi Shrine where many wild hiiragi (holly) was grown. Holly was the symbol of holiness and he named the house Hiiragiya, “House of Holly.” Today it is among the best known of Japan’s remaining Ryokans.

The idea is to have a peaceful respite from the city and the stresses and strains of daily life. “When I’m staying at Hiiragiya…I feel the serenity of old Japan,” said Yasunari Kawabata, the 1968 Nobel Prize Laureate in Literature who considered this ryokan his home away from home. The staff must feel that way too—some have been here for decades. 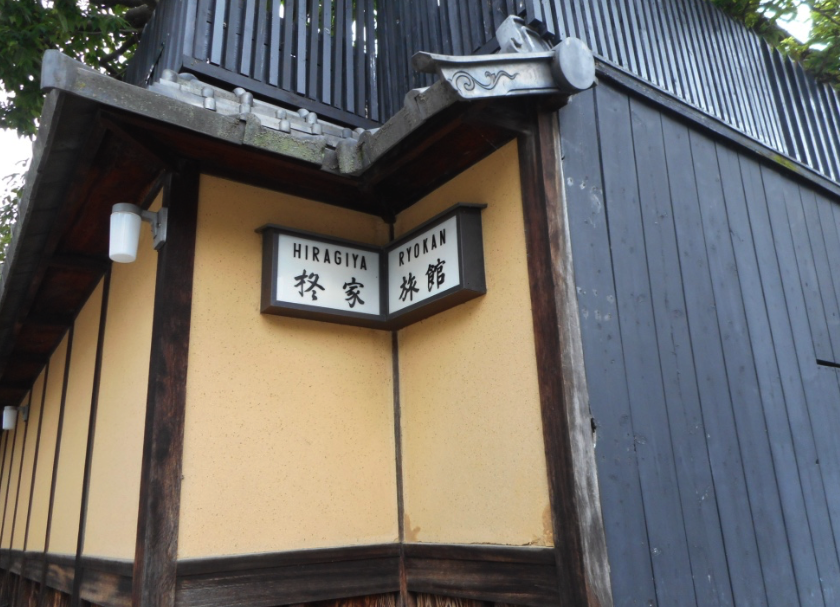 The small inn opens onto a side street that gives visitors a sense of a different Kyoto than the bustling center—tiny shops, workshops and restaurants—but just a couple of blocks from trendy shopping districts.

Each of the 28 rooms is individually designed, some with lacquered bathrooms, painted folding screens, ink paintings on handmade paper. Seven rooms were just added in a new wing in 2006, but carefully built in the traditional style.   It may be disconcerting to Westerners to be escorted to your room only to find a lacquered table and low chairs. Where’s the bed?

The futon—a kind of thick mattress—is brought out at night, the table and chairs moved to the side. You shouldn’t rush here—not through dinner or your bath. Take a deep soak in spring water in the traditional deep tub that might overlook a garden. Contemplate nature. “Greenery is very important,” she said. An important theme in Japanese literature is the changing seasons and that can be experienced here through the changing menu, based on seasonal ingredients, the cherry blossoms outside in spring or the changing color of the maple leaves in fall, the water that trickles into a small basin outside the room window.

Sip your tea slowly, relax, and refresh. Take the time to feel the silence.

“Japan is not such a big country, but each area has it’s own culture and cuisine,” Nishimura said. “To know a region, stay in a Ryokan.”