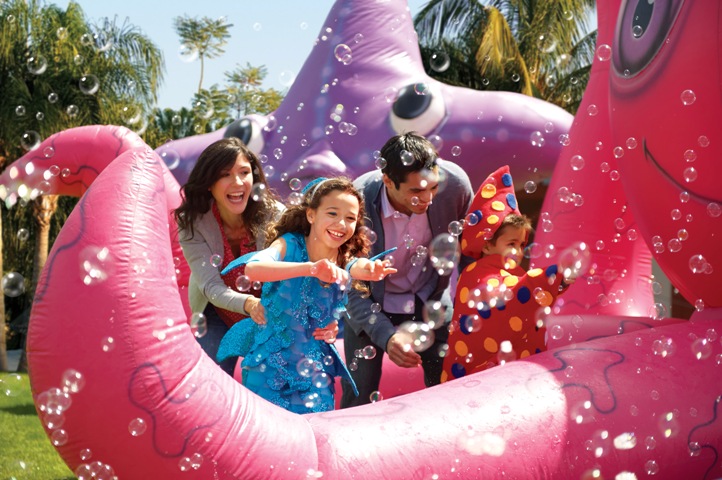 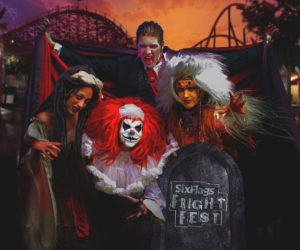 They don’t have to wait until Halloween to don their costumes and collect treats — not when every place from museums to aquariums to zoos to theme parks are celebrating Halloween the entire month of October with haunted houses, spooky corn mazes, special shows and as many treats as parents will permit. Orlando alone offers more than 80 Halloween events in the six weeks leading up to Halloween and showcases Halloween happenings all throughout October.

At other theme parks around the country, there’s plenty for the youngest kids (Join the fun at Ernie’s Rubber Duckie Costume Party at Sesame Place®, in Pennsylvania during October weekends during the Count’s Halloween Spooktacular) and for the nothing-scares-me tweens and teens(Weekend nights through October, 3 Howl-O-Scream transforms three Busch Gardens theme parks – in Tampa Bay, Williamsburg and SeaWorld San Antonio — into the ultimate scare adult zone.)

There are more than 1,200 haunted attractions around the country, according to AmericaHaunts.com, so you’ve got plenty of choices whatever the ages of your kids and wherever you live. There are scary boat rides (on the Wisconsin River in the Wisconsin Dells), and tours where you might learn a little history (the Ghosts Among Us Tour after dark at Colonial Williamsburg in Virginia).

Here are 10 ways to kick-start Halloween:

1. Head to the children’s museum. The haunted house at The Children’s Museum of Indianapolis is celebrating its 50th anniversary with pint-sized ghosts and princesses. Travel back in time in 3-D as Ghoulish Guide Dr. Timestein ushers visitors through five “deadcades” of fear and petrifying pop culture. In addition to the history-making haunted house, Time Warp offers special events such as the Black Hat Bash, Feast with the Witches, Scout Late-night Adventure and Xtreme Scream — a late-night extreme haunt experience. They even offer tips to make your Halloween even creepier with makeup ideas, snacks (ready to whip up edible eyeballs?) and ideas to ramp up your witch hat.

2. Boo at the zoo. At the Bronx Zoo in New York, for example, on weekends throughout October, there’s the Museum of UnNatural Mysteries, magic shows, musical performances and costume parades — even an extinction graveyard; in addition to traditional guest favorites, including the hay maze, extinction graveyard and seasonal craft workshops. Visit the Dr. Wilde’s Creepy House October 17 through 31 at the Miami Zoo, where there are plenty of other scares and treats.

3. Board a haunted train like Tweetsie Railroad’s 24th Annual Ghost Train® on weekends in Blowing Rock, N.C. Until Nov. 2, the train will howl its way through the Blue Ridge Mountains back in time to the Great Train Wreck of 1913, reliving the history and terror that came with a trip down Tweetsie’s tracks a century ago. Meet ghosts and spirits from the old railways as they pursue the Ghost Train’s passengers around every bend. Are you ready for a stroll through the Freaky Forest? Younger kids might want to skip the train and go trick-or-treating in the park and watch the black-light show at The Haunted Palace Saloon.

4. Enjoy everything pumpkin at a fall festival like The Half Moon Bay Art and Pumpkin Festival in the “World Pumpkin Capital” for a fun-filled California festival, Oct. 19-20. There will be Volkswagen-sized pumpkins on display, pumpkin carvers at work, a parade, plenty of pumpkin pie to eat and three stages of entertainment. (For more fall festivals, visit the “Taking the Kids Fall Getaways Guide.”)

5. Sleep with the ghosts. BnBFinder.com has a state-by state directory of more than 200 places where you’ll find shaking beds, flickering lights and unexplained happenings. In Savannah, Ga., — often called America’s most haunted city — the ghost of a wealthy guest who disappeared is said to haunt The Foley House Inn. You might meet a Civil War ghost (or at least hear ghost stories on Friday nights) at the Battlefield B-and-B in Gettysburg, Pa., — located on a nature preserve on the Gettysburg Battlefield.

6. Party with your favorite Disney villains at Mickey’s Halloween Party at Disneyland and Mickey’s Not-So-Scary Halloween Party in Orlando, FL. Maybe you’ll meet a barbershop quartet of dead cowboys or launch into a haunted section of the universe on Space Mountain. At Disneyland, there’s even a Dia de los Muertos traditional skeleton display in Frontierland and everyone loves the Boo-to-You Parade in Orlando. (The Halloween parties require extra admission.)

7. Take your teens to Universal Studios’ Halloween Horror Nights where the masters of cinematic special effects based on “American Werewolf in London,” “The Walking Dead” and other horror movies use the Orlando and Hollywood theme parks to house bloodthirsty beasts, entertain haunted souls and allow special ticket guests into way-too-scary haunted houses. (Not recommended for anyone under 13.) 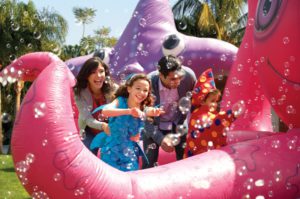 8. Celebrate with Shamu. SeaWorld’s Spooktacular in Orlando and San Diego provides special Halloween shows and the chance for your younger kids to strut their stuff, showing off their costumes while dancing with life-sized, but not-too-scary, sea creatures. (Ready to dance with a pumpkin fish?) The best part is, it’s all in the regular admission price.

9. Grab your costume and head to your local theme park. The 19 Six Flags parks put on a nightly Fright Fest (ready to conquer a haunted maze?) while during the day, there’s the Spooky Kooky Magic Show and the Monster Maze. At night, send your bravest teens to conquer the ghoulish scare zones, walk the terror trails and haunted mazes or fend off the 200 zombies.

10. Shop till you drop, since malls across the country tout special Halloween happenings. The House of Torment at the Highland Mall in Austin, Texas, is ranked among the country’s top Halloween attractions with three unique “haunts” inside the huge multi-level haunted house. Ready to meet the Hellion?

Got your witch’s hat ready?