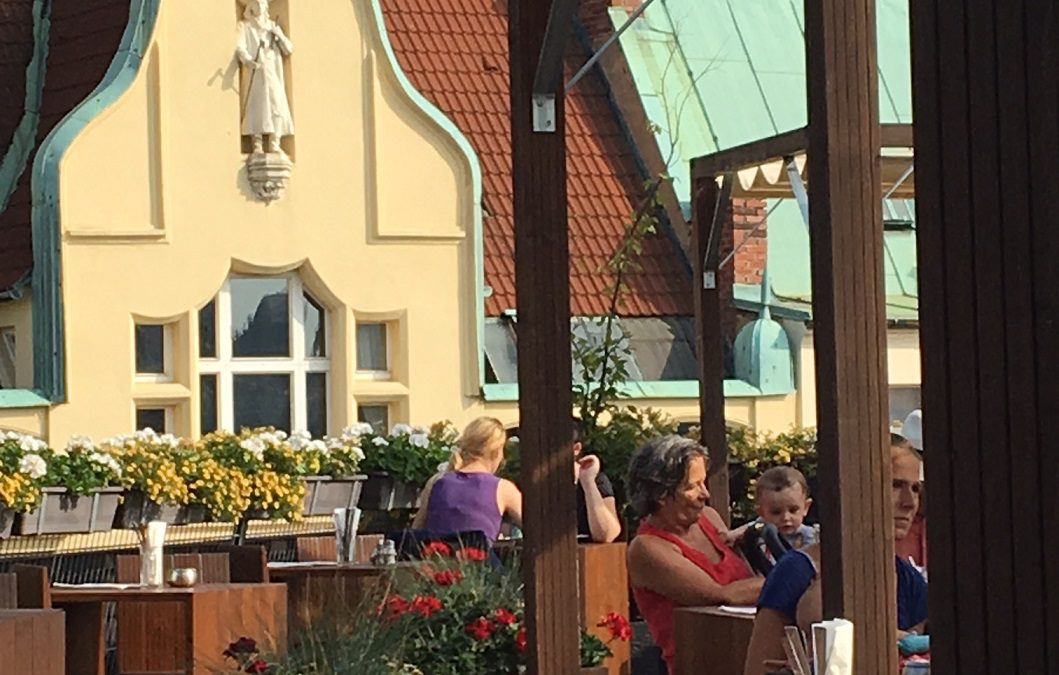 PRAGUE, Czech Republic (Day 2) — Prague is certainly the place to learn about a beer culture as the Czechs drink more beer than any one—more than 144 liters per capita.

“People drink beer at lunch and while they are watching their kids at the playground… it’s not frowned upon at all,” said our knowledgeable guide Robert Avakian of Eating Prague Tours. Avakian is an American who fell in love with a Czech woman and with Czech culture as well. “People either come for beer and stay for love,” he said, “or the other way around.”

He explained that Czechs don’t drink beer to get drunk, but rather to enjoy each other’s company. “Nazdravi!”–to health, we toast, looking into each other’s eyes as we  lift our glasses.

We’ve started at the Letna Beer Garden in Letna Park where we’re surrounded by locals—friends, parents and kids, those walking their dogs… and we try the Czech Republic’s most common beer, Gambrinus. “The working man’s beer” Avakian says, where fresh beer arrives daily from the brewery and is pumped into a tank. “As fresh as it can be, except at the brewery,” he said, and once it is gone, there is no more until the next day.

One Prague monastery has been brewing beer since 993. We visit the newest—a brewery on a boat the Lod Pivovar, anchored on the river where we also sample traditional Czech snacks, fish balls made with fresh water fish, dark bread and cheese. The beer we have, Monarchie, is only made here—dark lager.

(By the way, the Budweiser [pronounced BOOD-wiser here] sold in the Czech Republic is not the same as that found in the United States, due to a trademark dispute more than 100 years old.)

It’s good we’ve opted for comfortable shoes as we cover a lot of territory. How about a butcher shop and pub owned by Paul Day, a former Nobu London sous-chef helping to encourage breeding of heritage breeds of pigs. We sample Matuska that comes from about 90 minutes from Prague and Scotch Eggs–made with sausage, a bread crumb crust and fresh eggs. The Vegetarians get a delectable cream filled donut.

Perhaps our favorite of the day is at T-Anker atop the Kotva shopping complex built during Communist times. The Beer terrace festooned with flowers offers views of the city rooftops and a draft Pilsner from Brevnov founded in 993, one of the world’s oldest breweries.

Along the way, we get a history lesson–how farms were all collectives during Communist times; where the best Hops come from (Zatc region); how after the fall of the Iron curtain, Czechs suddenly found themselves owners of farms—or castles.    How teens who complete the 6-year Brewers academies are sought after for their skills and can get a job anywhere in the world.

“You can get beer anywhere,” our guide tells us, “even a butcher shop.”  Our last beer stop—after yet another snack stop at Sisters for veggie spreads on dark bread (I especially liked the beet!) we arrive at Pipa that offers some 150 bottled beers and eight rotating beers on tap.  It turns out that my daughter and son-in-law have already discovered the place. We try wheat beer, as well as Primator Weizen, which that has been ranked as “the best beer in the world” as well as a  dark lager and a sweet heavy porter, among others.

I surprise myself by identifying four of the five beers we’ve tasted—blindfolded.

An afternoon of beer tasting and we’re feeling good—but decidedly not drunk.  That’s the Czech way!

“And the best tour of the trip” declares my daughter.