A concert in the foggy woods 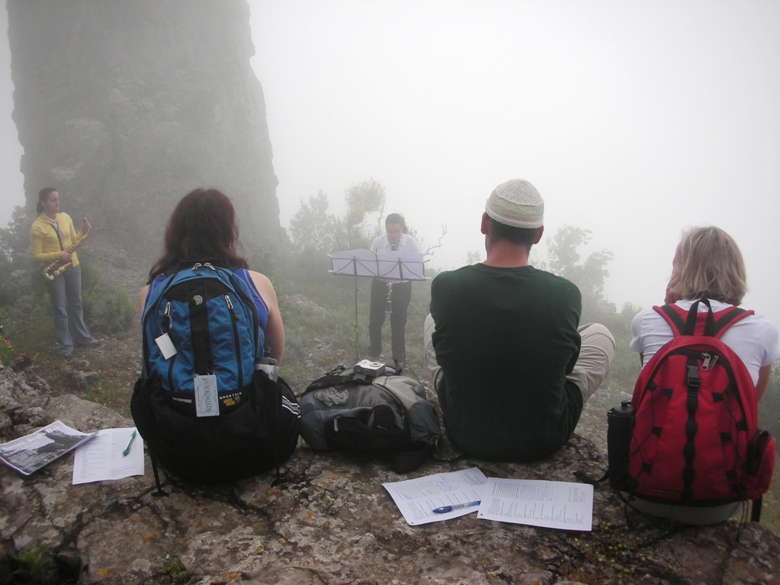 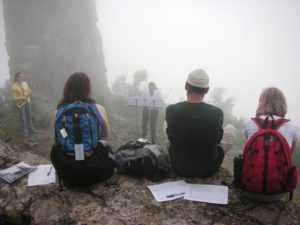 DAY TEN — Where Is Brigid? After a long morning hike on what’s called the Walk of Gods — a trail between Bomerano (a 45 minute shuttle ride on winding roads from Amalfi) — we are to assemble for lunch at Trattoria del Croce in the 300-person town of Nocelle. a few miles from Positano, where we’re spending the next two nights. Certainly the trattoria, on a narrow street (are there any other kind here?) would be easy to miss if you didn’t know what you are looking for.

Brigid — always one of the fastest hikers in the group isn’t there. Her stepson Drew last saw her on the trail and her husband Jim is worried. Even worse, he’s got not only the directions and maps but her water bottle, money and the card with the guides’ phone numbers.

One of our leaders retraces the trail to see if she is there. She isn’t. But in the end, all is well. Brigid, as we suspected, hiked passed the restaurant and wound up at a police station in Positano. A few phone calls and she was taken to the hotel.

De Rosa Maurizio (www.ontheogspath.com), who is from the village (2000 people) of Priano nearby, is guiding us today. He explains that this trail — which incidentally is so fogged in we can barely see anything — was called the Walk of Gods because legend has it, it the gods made it the entrance to earth because it was so beautiful between the mountains and the sea. Since we can’t see the view this morning, we take his word for it.Then, out of the mist we see a clarinetist and a saxophonist tuning up — right in the woods. It turns out they give concerts at different spots along this trail on certain Wednesdays. Though we’re too early for the scheduled Sounds of the Gods concert (www.isuonideglidei.com), they decide to give us a preview. Because of the weather, they’re not sure they’ll get many takers and we couldn’t be happier. It’s amazing and wonderful, sitting on a rock, in the middle of nowhere listening to beautiful music.

Even better, the mist lifts soon afterwards and we can begin to see the views of Positano where we will be spending the next two nights at the Hotel Montemare (www.hotelmontemare.it).

We clamor over rocks, up and down for the next couple of miles sometimes right along the ridge. We see the water, the yachts, the ferries steaming between the islands, the candy colored houses built up the hills. At other times, we’re completely in the woods. . Mauricio points out all kinds of wonderful-smelling herbs we would otherwise have missed — lemon thyme, rosemary, wild garlic, mint, oregano. In this region, he says, everyone has a garden and eats whatever is ripe at the moment — zucchini, eggplant, tomatoes, peas, potatoes — all literally picked that day. “You don’t need to mask the flavors with salt because everything is so fresh,” he says.

We see that for ourselves at the Trattoria in the tiny town of Nocelle where we feast on fish, juicy tomatoes, mozzarella and ricotta that probably were just made, as well as eggplant, peppers salami and ham.

This morning over breakfast on the terrace before heading out on our hike, we talk about why the group seems so companionable. “The people who are attracted to an active trip like this are a certain type,” says Lori Gilbert, a physician from Philadelphia in her thirties, who is enjoying her fourth Backroads trip. That’s not to say everyone will be best friends. “There are always people you don’t gel with,” she adds, so you gravitate towards the people you do.”

One tip: Be honest about your physical abilities, she urges. “Otherwise you’ll be miserable “ if you end up on a trip — particularly a bike trip — that is beyond your level.

I ask Brigid McCormick what prompted her and her husband Jim, to invite his 28 year-old son and 25 year-old daughter along. She explains that Jim, an Endodontist, is about to retire “We thought we’d invite them to one of the kick offs to retirement. This is not something they’d normally do and we wanted to introduce them to something different, something we like, and maybe broaden their horizons.”

Whatever the reasons for being here, Backroads makes it a stress free way for anyone to enjoy an active vacation.. Deborah and Emily Douglas, the other mother daughter duo, tend to hike together, while Reggie typically is ahead of me, catching up at lunch.

For the next two nights we’re at the lovely Hotel Montemare, a three star hotel in Positono (www. Hotelmontemare.it) that we wonder why it isn’t four-star. I’m sitting on my terrace overlooking the water where there is a trellis of red flowers above me, pot of lemons growing in large terracotta boxes and beautiful lavender flowers. Could it get any more perfect than this?

And though we can eat on our own tonight, most of the group opts for a raucous celebration at Café Positano (www.caffepositano.it), just a few steps from the hotel overlooking what else — the sea. With all the wine that was consumed, it’s amazing we remember what we ate — excellent shellfish.