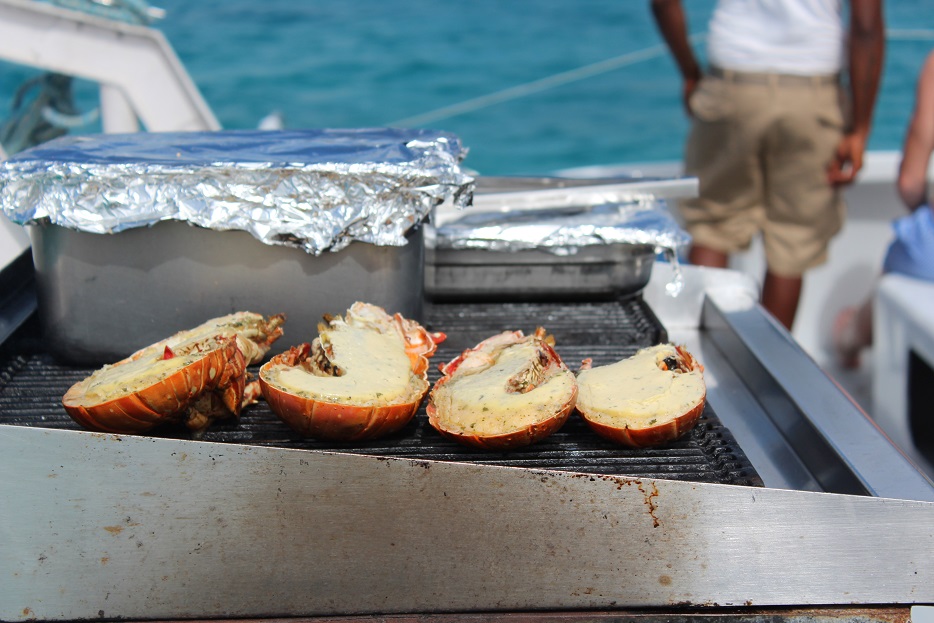 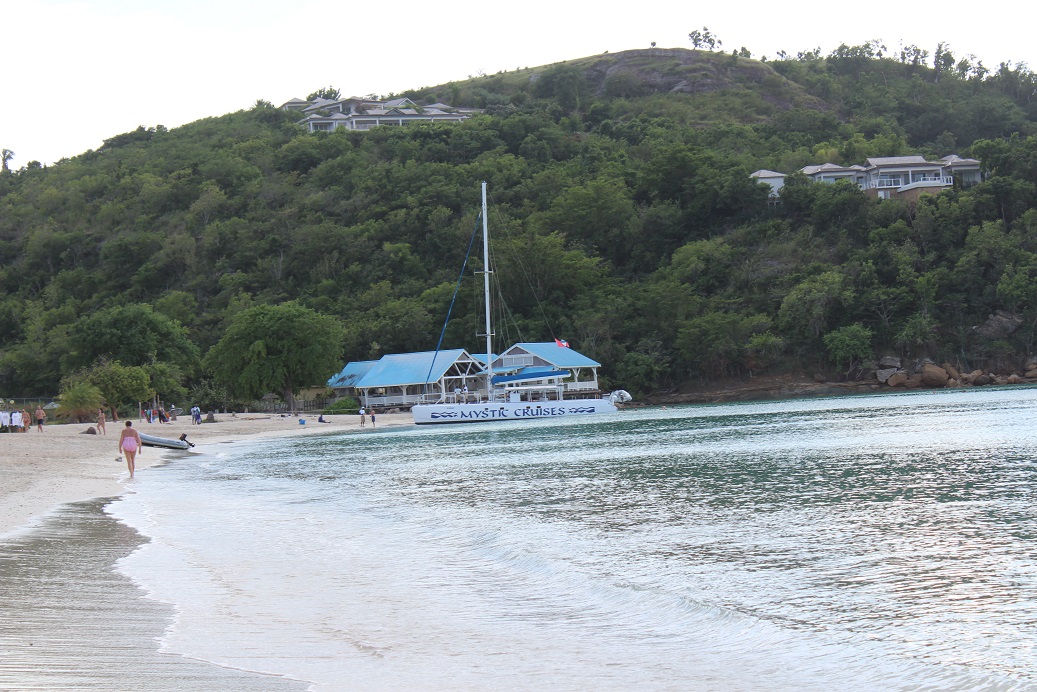 Our Tropical Adventures catamaran stops for a beach break on Antigua

We are on board the Mystic II, a 65-foot Catamaran sailing around a portion of the Antigua coast –a Tropical Adventures day trip popular with the many cruisers coming to Antigua.

Antigua in the Northeastern Caribbean escaped major damage in the 2017 hurricanes Irma and Maria, which ravaged other islands to the north and west. It’s sister island, Barbuda, 27 miles to the north, was damaged. Antigua and Barbuda were British colonies from 1632 but gained independence in 1981. All of the beaches on Antigua are public.

As we sail, Captain Lincoln Daniel points out Fort James and Fort Barrington, two of the 44 British forts here, while his colleague Marley Francis entertains the passengers with a running commentary as we head to Cades Reef, more than two miles long, for snorkeling.

We pass beaches with names like Deep Bay, Coconut Beach, Five Islands Harbor, Princess Margaret Beach (so named because this was the first beach she visited on Antigua), Carb Hill Beach and Turners Beach—named after the family who runs a famous beach bar here–and some of the island’s 70 tiny shore islands. 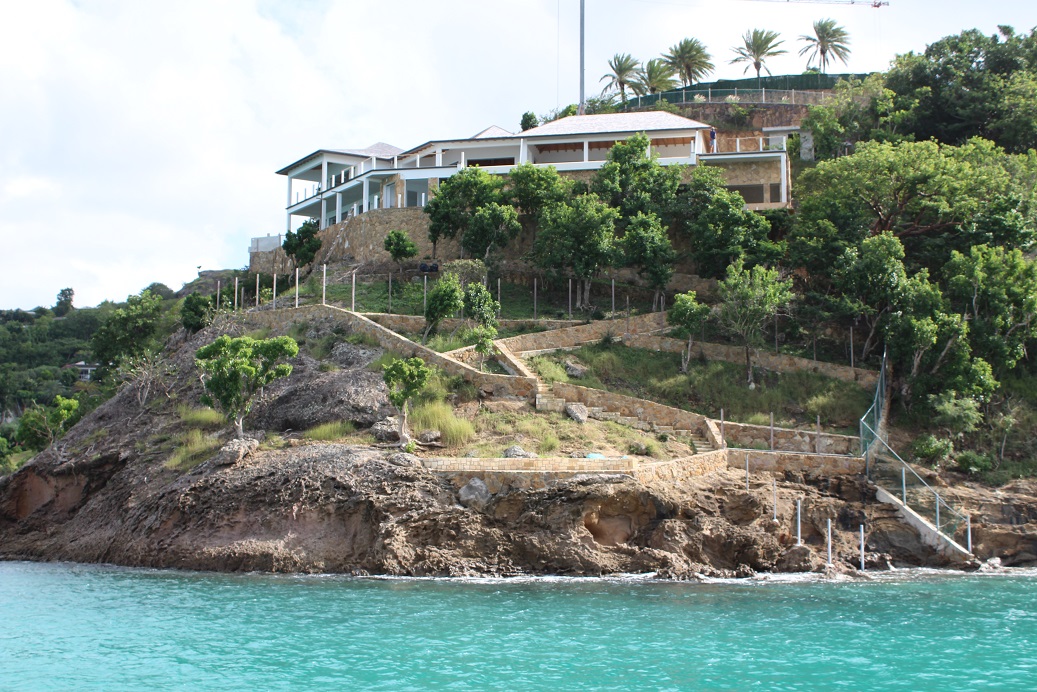 A stingray jumps out of the water. It is a perfect blue sky tropical day. The crew points out clothes designer Georgio Armani’s mansion (he apparently only comes for the year-end holidays) We see sailboats in the distance, the Cunard Queen Mary anchored offshore and catamarans in the coves like the one we took on a sailing trip for a week around Antigua when our kids were young.

Antigua survived the recent hurricanes with minimal damage, as we see as we sail around the beaches and hotels. In fact, we meet guests where we are staying at Curtain Bluff Resort—and where we honeymooned 35 years ago—who came because the  hotels on islands they typically chose were closed by hurricane damage.

Even when staying at an all inclusive as lovely as Curtain Bluff, it is good to get out and see a bit of the island, I think (Curtain Bluff offers sailing and fishing trips at an extra charge).

We drove into St. John, Antigua’s capital, which our cab driver confesses can be “chaotic” when four or five cruise ships are in—more so far this season because cruises have had to shift their itineraries because of the storms.

Stop along Fig Tree Drive and the rain forest where you can sample the famous Antigua Black Pineapple (it is just the shape and outside color that is different) along the way ) or visit Betty’s Hope, one of the first full scale sugar plantations on the island and the place to see restored sugar mills.

Captain Daniel notes that all of Antigua only has 90,000 citizens and five cruise ships may bring 25,000 people to the island.

It’s certainly worth the effort to see Nelson’s Dockyard, English Harbour, that is on UNESCO’s list as a world heritage site and is a famous local landmark. Come up to the Shirley Heights Lookout for the fabulous view and on Sunday afternoons, local steel pan music and barbeque.

We’re treated to a sumptuous lobster lunch aboard the Mystic II along with grilled chicken, local beans and rice, potatoes and salad. There are plenty of tropical drinks and beers—enough so that the passengers—mostly British–are happily dancing the afternoon away.

I learn there are some 60 restaurants serving up local seafood specialties including spiny lobster, fish and conch.

Curtain Bluff’s Chef Christopher Blatz, here since 1995, says he will change the menu if a fisherman calls telling him they have something special—like the 100 plus tuna the other day. When he first arrived, he said, there was more a focus on beef—today there  typically are several fish dishes on the menus at Curtain Bluff’s two restaurants  with everything from eggs, free range chicken, herbs, black pineapples (they’re not really black, just shaped differently from convention pineapples), melons and vegetables coming from nearby farmers. “We want to totally support the local economy,” he explained.  “And everything is fresh.”

Before lunch, we snorkeled at Cades Reef and that’s where we saw the fallout from the hurricane.  Though we did see tropical life—spiny black sea urchins, parrot fish, yellow and red snappers, tiny reef fish, even a tiny shark—blue and yellow, stripped and checkered—there weren’t nearly as many as we recalled from past visits.  They have been pushed further out into the sea, Capt. Daniel said. “Hopefully they will return.”

Sadder still, the long term threat to coral reefs worldwide due to human activities (including ocean warming) is all too real. Since we first came here 35 years ago we have witnesses a steady bleaching of Antigua’s premier reef. We’ve seen it elsewhere in the Caribbean as well.