A few days in New York with a preschooler 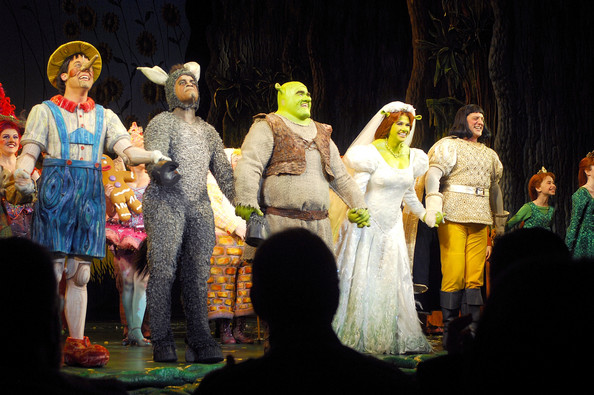 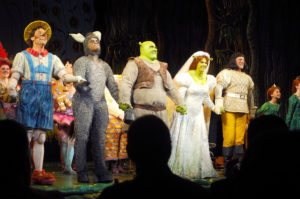 Shrek the Musical on Broadway

“You’re going to love the show,” the woman in front of me in the ticket line at Shrek the Musical assures me — and everyone else in line.

Mary Vaughn should know. She’s seen the production which opened last December several times because her son, David F.M. Vaughn , is a member of the company and today is playing Lord Farquaad for the first time. Vaughn tells me she’s flown up from Florida just to see her son perform the role — all done on his knees because Farquaad, as Shrek aficionados know, is very short.

This is my four year-old cousin Hannah Sitzman’s first Broadway production and she loves every minute of it — from the costumes and sets to the music to the black tee shirt which spells out “Shrek” in pink sparkly letters. I especially loved the magic of the costumes.

How did Lord Farquaad move on those tiny legs? (I believe he actually spends the entire production on his hidden knees). And how does Princess Fiona turn into a green ogre, seemingly within our eyes? Did I mention how terrific the cast was — Brian D’Arcy James as Shrek, Tony Award winner Sutton Foster as Princess Fiona and Daniel Breaker as Donkey.

Shrek the Musical, of course, is based on the story and characters from William Steig’s book Shrek! as well as the animated film Shrek — the story of a swamp-dwelling ogre who goes on a life-changing voyage to reclaim the deed to his land, making a best friend (Donkey) along the way, fighting a dragon and rescuing a rather unusual princess. He learns that true love and real friendship aren’t limited to those who are handsome.

When adults consider whether it is worth the investment to take young children to a Broadway production, they should remember that wonder and excitement will last a lifetime. This particular production has a great message too — It’s OK to be different! And as Shrek tells his princess Fiona when he discovers she’s really an ogre like him, “Beautiful isn’t always pretty!”

The audience at this Sunday matinee was packed with families encouraged no doubt by Shrek the Musical’s efforts to make theater affordable with discounted seats. Check www.shrektember.com and www.shrekthemusical.com and for free kids’ seats certain days of the month at various Broadway productions — as well as discounts on parking and area restaurants. Also www.kidsnightonbroadway.com and www.nycgo.com

There is plenty of other theater in New York for kids too — notably the New Victory Theater (www.newvictory.org) which is hosting a Scottish Festival this fall to introduce audiences here to Scotland’s amazing puppetry with productions of Cinderella and others.