A hidden gem of a restaurant in Scotland 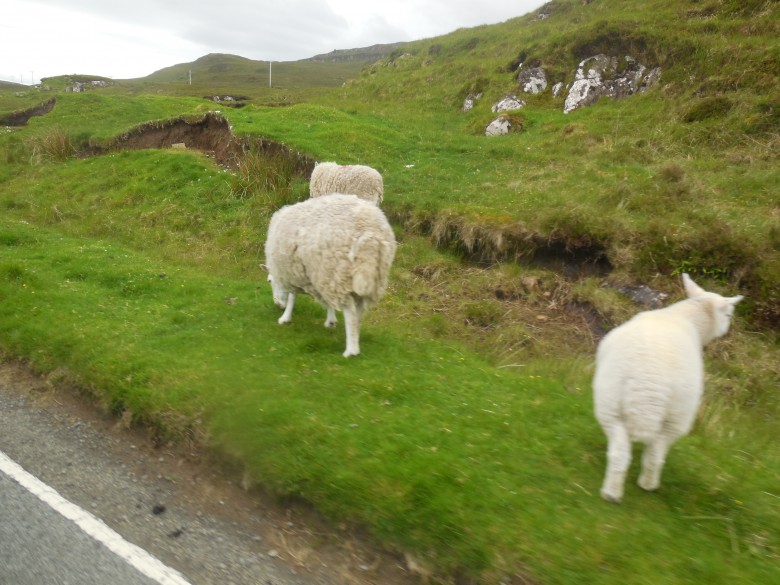 ISLE OF SKYE, Scotland (Day four of Windstar cruise) — Like a lot of young parents, Shirley and Eddie Spears longed to raise their kids away from the city.

But unlike a lot of parents, they changed their lives to do that—and in the process had a hand in changing the way the world thinks about Scottish food.

The Spears own the tiny (15 table) Three Chimneys Restaurant and six-room inn on an out of the way stretch of road on the Isle of Skye where you brake for sheep crossing the road and the fish you eat for lunch might have been caught that morning, the lettuce just harvested.

People come from all over for the fresh food—it’s necessary to book months in advance in the summer. “For some people, this is the reason they come to Skye,” a local told me. For one of the coveted rooms overlooking the loch, it is sometimes necessary to book nearly a year in advance.

But some 30 years ago, the couple was living a far different life in London. Spear had been raised in Scotland and wanted to return to raise her children here. She was also distressed that Scotland had such a poor reputation for its food. “The best food was in people’s homes,” she said. “There was no restaurant scene.”

“Scotland had a great culinary heritage but it had been forgotten,” she said. “I wanted to be proud of Scottish food.”

Did I mention the Spears, though they loved to cook and eat, had zero experience in the restaurant business?

That didn’t deter them. A decade before, Shirley had enjoyed a memorable holiday on the Isle of Skye, extending her stay to have a second meal at a simple restaurant with a dirt floor and peat in the fireplace called The Three Chimneys where she feasted on perfectly prepared Fish and Chips.

“When I saw it was for sale, I told my husband this is where we are going.” The two sold their house, packed up the kids aged three and five (Eddie’s daughter was older, starting University) and moved back.

At first, Shirley, 32, did all the cooking and Eddie, 37, the serving. They lived above the restaurant in a flat for 25 years “and we made a life.”

They quickly realized if they were going to succeed, they had to make it worth the drive. “So we turned the location into something special.” Destination dining doesn’t seem unusual now but it was then despite the rolling hills, the sheep, the beautiful Loch. “Absolutely people thought we were crazy,” she said. “We struggled.”

Because they couldn’t get fresh produce, they started working with local producers – one woman who grew lettuce, another man who had a flourishing garden with berries and vegetables and fishermen (this area is particularly y known for shellfish).

In 1989, they were on the short list for Scottish Restaurant of the Year. That and Shirley’s marketing efforts—she was a PR pro in her previous life—helped. And the trends caught up with her. Young people were beginning to move here, wanting a simpler life and began to grow things. Her Sommelier, Petri Pentikainen, for one, moved here with his wife from Helsinki and is in the process of buying a house they hope to turn into a bed and breakfast with a big garden. “We came to hike here,” he said. (This area is famous for mountaineering.)

The 30 year-old head chef, Scott Davies, just moved from another prestigious job a few weeks ago. “The produce is second to none,” he said. “The fish is right from the sea to dinner…it is as it should be!” (Book far enough ahead and you might snare a seat at the six-person table in the kitchen where you are permitted to wander around and chat up the chefs.

“The change in Scotland‘s food is beyond recognition in the last five years,” Spears said. Not only has there been the growing interest in the farm-to-table movement, but the tourism industry has recognized that Food can help sell visitors on Scotland. In fact, this year Scotland is celebrating “The Year of Food and Drink” showcasing local produce and its world-class restaurants. There is a new Ice Cream Trail—to go along with the country’s Whiskey Trail

Spears, who now is chairman of the Scottish Food Commission, laughs that even 10 years ago “I was banging my head against the wall,” to convince tourism officials to focus on food. “A complete turnaround,” she said.

That includes kids. There is no children’s menu and they might not be able to sit through the multi-course dinner, but rather than provide a children’s menu, Spears’ kitchen will dish up smaller portions. She says children visiting Scotland should “have a go at fresh seafood, beef, lamb game…don’t just go for burgers you can eat anywhere!”

We certainly had a memorable lunch–a delectable Fish Soup and a kind of chowder called Colbost Skink, with Smoked Haddie, Marag Dubh, Local Croft Egg Yolk and a wee bit of Talisker 10-year old single malt Scotch (distilled on the Isle of Skye). There was salmon and a seafood platter with local prawns, scallop, oyster and squid and a Hot Marmalade Pudding Soufflé with Drambuie Syrup and ice cream. One for the memory books.

Still, says Spears, “The success is nothing I take for granted.” But making your life what you want—and achieving such a big goal in the process…that is something to celebrate.