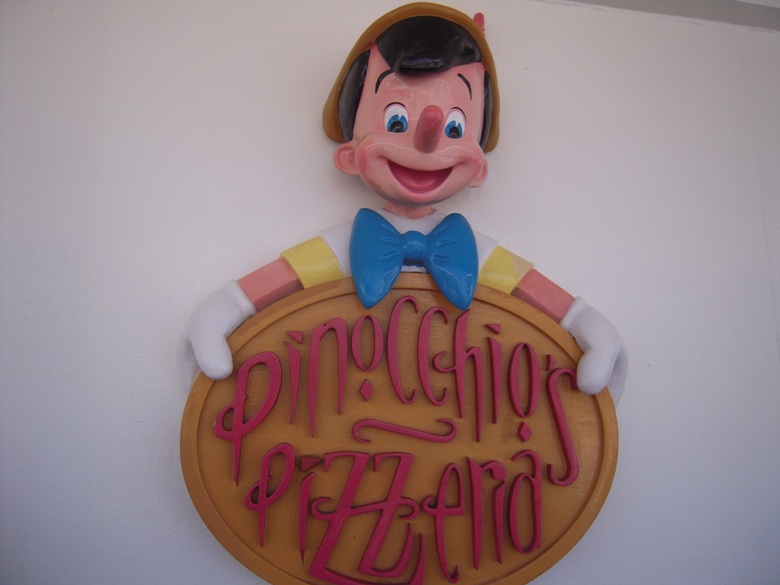 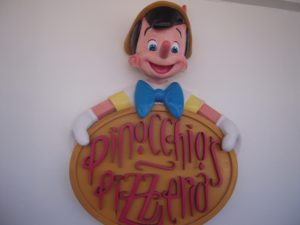 Pizza all day all night on Disney Magic

The 120 cooks, 48 stewards and 10 storekeepers on board the Disney Magic (www.disneycruise.com) aim to make sure you’re not. How much weight you’ll gain is another story.

But Executive Chef Edward D’Costa says parents as well as kids seem to be eating healthier. Even the fries and chicken fingers are cooked without trans-fats. And while Pinocchio’s Pizzeria offers freshly made pizzas (made in front of you on deck and Pluto’s serves burgers and hot dogs, Goofy’s has a nice assortment of fresh fruit—watermelon, melon and grapes, as well as a variety of wraps (feta cheese and olives maybe?)  and sandwiches (turkey and cranberry sauce, roast beef). So if parents don’t want to leave poolside, they can eat something else.

D’Costa also noted that now that the restaurants are offering half portions of the adult menu, more families are “experimenting” beyond the kids’ menus. And if the kids don’t like something, no worries—you can just order something else. Since you’ve paid for as much food as you want to eat, a cruise ship is a great place to allow the kids to experiment. They can order the Ossobuco and trade it for pasta if they don’t like it, for example. On the other hand, the teens at our table revel in their inner child hood, ordering mac and cheese, chicken  strips and Peach Smoothies along  with Roasted Pork Tenderloin on night or Rack of Lamb another,

No worries either if you have any food allergies. At least 50 people a day need special meals–no nuts, no glutens , no eggs, says the executive ship and these meals are prepared in special pans. The kitchen even keeps labels on hand in case anyone wants to check. A tip: If you are traveling with someone with allergies, it is easier if you opt for the dining rooms rather than the buffets, D’Costa says, with everyone from the head server down aware of the situation to make sure no mistakes are made.

The food has been uniformly good and better than good many evenings and you can’t say that aboard all cruise ships that like this one are serving 12,000 meals a day.

There are the extra touches—servers drawing Mickey Mouse heads out of ketchup for example. You alternate between the three restaurants:  Lumiere’s, Animator’s Palate and Parrot Cay with their own menus and own kitchens. But the wait staff moves with you so by the third day, they not only know the kids’ names but whether they like milk or juice, ketchup or mayo, Caesar salad or noodle soup.

It is an impressive operation—not easy feeding 2640 people every day and a crew of nearly 1,000.  D’Costa says it is most interesting to cook in the crew galley because such effort is made to accommodate the tastes and cuisines from some 55 countries.) Did I mention that not only is room service free but it’s prompt—essential on a cruise like this when people are heading off the ship early for shore excursions in Rome, Florence and Naples.

There are themed dinners:  Prince and Princess on formal night, Villains on the night the new Villains Show debuted, Flavors of the Mediterranean when we are in Corsica and an effort made for even the buffet to reflect the region’s cuisine (Couscous in Morocco, for example), as well as to serve up American stalwarts–salads, sliced roast beef or pork tend3erloin, soups, pastas…. And every variety of desert.

We dine twice in the adults-only restaurant Palo with its extensive Northern Italian menu—the first a special wine-pairing menu with our Adventures by Disney group, The restaurant only seats 120 people and costs extra but the tab (less than $20 a person) is well worth it for the think-crust pizzas, Sicilian Pesto marinated grilled shrimp salad, grilled Portobello mushroom and Polenta appetizers,  the risottos, the Lobster ravioli, beef tenderloin and stupendous chocolate soufflé for desert. And this being Disney, they don’t blink when we ask for a couple of extra soufflés—accompanied by gelato, of course—to take to a couple of chocoholic teens two young to accompany us.

Sure the new megaships have 10 or more specialty restaurants and Magic has just one–Palo (The new Disney Dream will have two). “But it was very difficult to get a reservation,” said Doreen Messina, from Rochester NY cruising with her husband, two daughters and other family members to celebrate their 30th anniversary. “They do a great job,” she said. “We’ve cruised 10 times on other lines and we’ve never seen such friendly staff on a ship. They are so accommodating. Everything is easier than on the great big ships.”

That’s exactly what cruise director Peter Hofer, who dubs himself “the captain of fun,” likes to hear.  He is in charge of the entertainment, activities and kids programs as well as shore excursions.

On a sea day, there are 30 different activities going on from martini tasting to bingo,   a craft to make masquerade masks game shows (So you think you know your family) to shows that are filled with 1000 guests in the Walt Disney Theater to magicians and comics and singers. The last sea day you can even learn how to fashion towels into animals as the stewards to every night.

And that’s not counting the 50 youth staff from around the world on board to make sure the kids are happy—over 1,050 of them!

No worries about your teens drinking either. Their cards are tagged and if they are spotted (should someone older buy them a drink), they’ll be reported to security. This is Disney after all.

Over the course of a cruise like this one, the majority of the kids on board participate in the programs. The others spend time at the pool and joining in the family activities. “Some families come because both parents are working and they want to spend time together,” he explained.

And with as many as two dozen family activities on a given day, there’s no shortage of things to do.  For grandparents too.

The Adventures by Disney crowd meanwhile, had their own animation class today—drawing Pinocchio and who shows up at the end to sign everyone’s cartoon–you guessed it, the little guy himself. That’s the Disney touch for you. The three grandparents in the Adventures by Disney group were joking their way through the animation class with their grandkids.

“Sometimes the grandparents are bigger kids than the grandchildren,” Hofer, the cruise director said. “It’s fun to see.”