A new-style adventure by Disney — no mouse ears 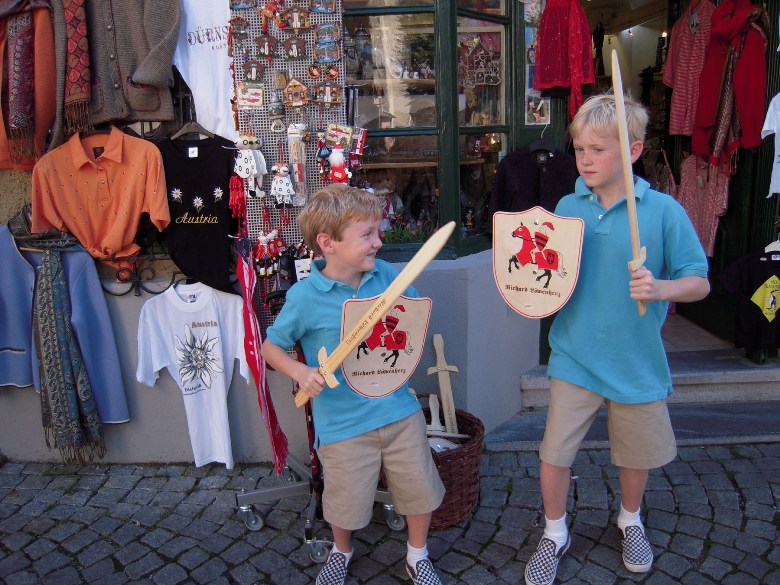 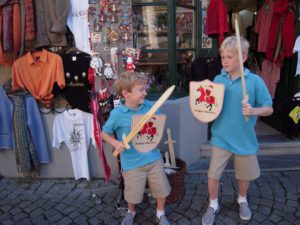 Jack and Will Andrews do a little souvenir shopping in Durnstein, Austria along the Danube River.

VIENNA — There’s nothing like a little time travel to get the day started. We’ve zipped back to the 18th century at Schoenbrunn Palace (www.schoenbrunn.at/en/) in Vienna to check out what life was like for the 16 children of Empress Maria Theresa, as well as the children who were their servants. The nine 21st-century kids (ages 6 to 12), two guides and me, make our way through the Palace Kindermuseum. We try on 18th-century clothes (really heavy!) and wigs that kids wore (itchy!), play with 18th-century toys (no video games!) and practice bows and curtsies. Their parents, meanwhile, are taking a decidedly adult tour of the fantastic 1,441-room palace.

We sniff the strong perfume that even kids used, since they bathed so infrequently (servants just once a year) and learn that even though royal children had servants to do everything for them (even brush their teeth), they didn’t have a lot of time to play because they were expected at court (sitting quietly for hours). Still, our gang decided they’d rather be royals instead of servants. “You didn’t have to do any chores,” explained Californian Annelise Williams, 11.

The hour-long immersion into 18th-century kids’ world proved an ideal way to engage young American visitors. Later, we were treated to a special marionette show where the kids got to try their hand at working the puppets (not so easy) at the palace’s Schonbrunner Schloss-Marionettentheater, an apple strudel-making demonstration (with samples, of course) and an after-hours tour of the world’s oldest zoo, dating back to 1752, which was once the private menagerie of the Hapsburg empress and emperor. We ate our dinner in the glass Palm House where Empress Maria Theresa liked to eat her breakfast.

Sound good? Well, this is just the first day of an Adventures by Disney (www.adventuresbydisney.com) trip designed to de-stress family travel and provide unique experiences families would be hard-pressed to duplicate on their own. (In Salzburg, how about a surprise visit and performance from “Little Mozart”?) Local guides join us at each stop. “And no one has to wear mouse ears!” jokes David Andrews, who is from San Diego and traveling with his wife and four kids, ages 6 to 15. I’m traveling with my 17-year-old daughter, Melanie, and her friend, Hayley Jacobs. I worried this trip would be too young for them but they’re having every bit as much fun as the 6 year olds, thanks in part to our two capable and always upbeat guides, 30-year-old Alex Kemper, who gave up law to lead trips, and 23-year-old Trevor Enderby, a Disney veteran.

“I liked that they did all the research and we could just go with the flow,” said Raj Matharu from Bloomington, Ind., traveling with his wife and three daughters. “The guides took care of every detail and they made everyone feel special.” That included his daughter Simran who turned 10 on the trip and got a locally made gift from the guides.

Kemper and Enderby check us in and out of hotels, deliver luggage to our rooms, mark maps, if we want to venture out on our own, make dinner reservations (there is plenty of free time), hand out snacks and water and even have sanitizing wipes available for the kids after their visit to the petting zoo. When 88-year-old Velma Williams, traveling with her son, daughter-in-law and granddaughter, worried she wouldn’t be able to last on the Prague walking tour, they arranged for a car to bring her back to the hotel. When my two 17 year olds wanted to find a club they could visit in Vienna, they made several suggestions of places suitable for teens. When we cruised down the Danube River, they entertained the kids so the parents could relax on the top deck and enjoy the postcard-pretty views of the villages and fortresses.

An extra plus for the children, especially those traveling solo with their parents, is the chance to be with other kids. “She gets bored just with us,” said Angela Williams, who was traveling with her husband, 11-year-old daughter and mother-in-law. “And I don’t have to worry about getting from place to place or waiting in line. That’s a big thing for me.”

The big thing for Elaine Moore and David Bauer was not having to entertain their 8-year-old daughter Katherine “24/7”. They were so taken by the concept that they signed up for a second week in Germany immediately following this trip. By the middle of the week, some of the other families were talking about where they would like to go next year.

They’ve got plenty of choices as Adventures by Disney just announced it is adding eight new itineraries next year — from a Northern California trip to a Safari in South Africa, from a Boston to New York tour to Alaska and the Alps. There are trips to Costa Rica, Peru, Italy, Ireland and Australia, as well as others within the United States. In addition, they’re introducing “signature” trips with upgraded accommodations and unique activities. (A private performance by an African dance troupe or lunch with “John Muir” who helped to establish Yosemite as a national park.) Already hundreds of past guests are rebooking for next year, says Ed Baklor, senior vice president, Adventures by Disney, with itineraries that will suit anyone.

Certainly any family or couple — we had two twenty-something teachers in our group celebrating their anniversary (there are also adult-only departures) — could follow a similar itinerary on their own for less money (these trips average more than $10,000, plus airfare for a family of four. Check out the early booking deals!) But, said David Andrews, “It’s excellent value for what you get.” He noted that hotels, ground transportation, most meals and tickets to venues and museums were included. That’s not even counting the absence of the aggravation that typically goes along with navigating unfamiliar turf with kids in tow, especially when you don’t speak the language.

“This is the best vacation I’ve ever had,” declared Raj Matharu.

Our final dinner was a medieval banquet in a historic house in Prague where a jester welcomed the kids at the door. There was swordplay (the kids were invited to joust) music, a fire-eater, and even a visit from ” King Charles IV,” who welcomed us to his city. The food kept coming. The wine, beer and Sprite flowed freely. Adults were as wowed as the kids.

There was just one downside. “I needed a week in each city,” lamented Ralph Williams.