A new way with kids menus at San Francisco’s Exploratorium 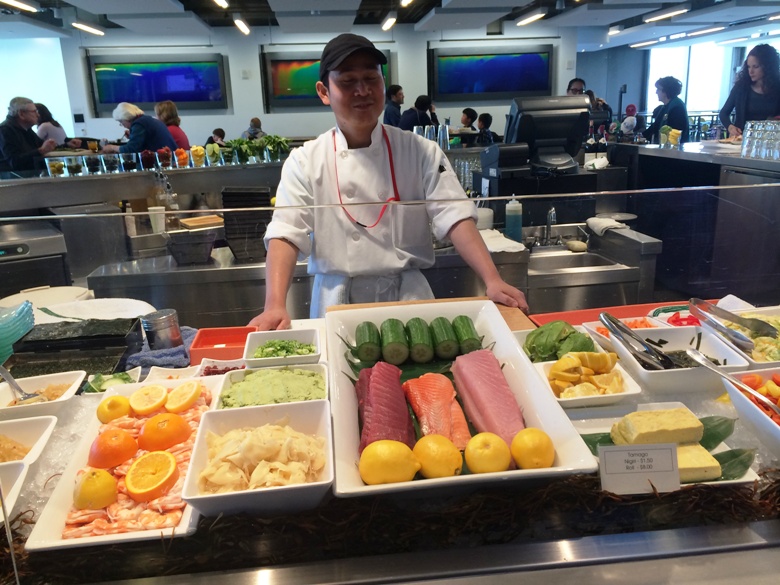 SAN FRANCISCO (DAY ONE OF FOUR) — There’s no kids menu.  No burgers, no fries, no mac and cheese.

“People ask every day,” says Clay Reynolds, the general manager of the SEAGLASS Restaurant  on San Francisco’s increasingly popular—and hip Embarcadero along San Francisco Bay  that is home to a growing number of  popular and innovative restaurants  and a mecca for foodies.

But this isn’t a restaurant aimed at the typical young professional crowd that frequents this area’s eateries. SEAGLASS is at the Exploratorium, the museum with 650 hands-on exhibits that is one of San Francisco’s top draws for local and visiting  families—CNN has just  reported that the Exploratorium is the number one favorite spot in the country for kids.  The museum has welcomed more than a million guests since it moved to Pier 15 a year ago this month, tripling its space.

No wonder SEAGLASS serves more than 1600 meals a day—just at lunch, many to families.   But just as the Exploratorium’s exhibits are designed to encourage young visitors and their parents to explore and step out of their comfort zones, that’s the aim of the restaurant, says Reynolds and his partner,  Chef Loretta Keller, whose restaurant Coco500 is consistently ranked among the city’s best. They want families to eat healthier and what is in season.

“The point is the museum is all about experimenting and trying things out.  This is a perfect opportunity to try new things with their food too,” said Keller.

The restaurant was opened in partnership with Bon Appetit Management Company, a local restaurant company that creates and manages restaurants for museums, universities and others around the country with a commitment to using locally sourced food, sustainably caught seafood, humanely raised meat and eggs and preparing everything from scratch.

Here, nothing is made with corn syrup; there’s no Diet Coke or Coke, but natural sodas made in California.  Kids love the “Cuties” Tangerine Juice.  How about pomegranate juice or coconut water?  There are locally made gelato bars instead of ice cream.

Instead of white-flour pasta, the pasta served (with homemade tomato sauce) is from Spelt, an ancient whole grain; the roast chicken is organic, the fish at the sushi bar is all in accordance with the sustainable seafood guidelines established by the Monterey Bay Aquarium SeafoodWatch.

Keller noted the concept extends to the take-out seismic joint  café  at the front of the museum  where the organic grilled cheese sandwiches are a big hit.

It’s not always easy, Keller and Reynolds concede, when parents come in expecting a traditional kids’ menu. No burgers? No fries or mac and cheese?

But the staff has been trained to do more than just say No.  They offer families an alternative—the pasta instead of mac and cheese, roast chicken with freshly made cornbread, an all-beef hot dog made that is antibiotic free or a cheese quesadilla made with organic cheese. Kids line up for sushi rolls made in front of them and the homemade clam chowder, a San Francisco staple.  (When I interviewed kids for my upcoming Kid’s Guide to San Francisco, they all said visiting kids shouldn’t leave without trying a bowl of clam chowder.)

Kids can have a taste of a honeycomb that is part of a lesson here—the mysterious blight that is killing thousands of bees is directly impacting California, particularly almond trees.  (Did you know 70 per cent of the world’s almonds come from California?) Kids can have a piece of honeycomb with fruit or yoghurt or just taste some.

Keller notes that you won’t find kids’ menus in Asia or France.  “Our feeling is that kids menus reinforce poor eating,” explained Reynolds.  “ We decided to offer kid-friendly food instead.” And at a reasonable price—many offerings are under $10.

Reynolds adds that the wall tiles were designed to look like the different colors of the bay—as is explored in one Exploratorium exhibit that shows how the water can be any color from pale grey to blue to nearly black.   “We hope people will look at the tiles and look out at the bay and match the colors,” said Reynolds.  “We hope coming here will inspire a conversation.”

Did I mention the restaurant overlooks San Francisco Bay on one side?

There is an interactive “Icy Bodies “ bar  where under the glass frozen CO2 makes shapes and bubbles. (Yes, alcoholic drinks are served here—especially popular Thursday nights when the museum is open just for those 18 and older and the restaurant stays open until 10 p.m.)

Large wall panels show the properties of hot and cold water in San Francisco Bay—oranges and blues.  “The idea is the dining experience can engage you to ask questions about what is going on around you,” Reynolds explained.

There is an installation that shows an accelerated day on the bay —cars on the bay bridge, boats on the Bay moving fast.

The cookies, muffins and cupcakes are hard to resist. Of course there are gluten free options too.

On a day recently when many kids were on Spring Break, the restaurant was packed with local families as well as those visiting from out of town and nobody seemed unhappy with their choices.