A rainy hike up to a Norwegian fjord country farm 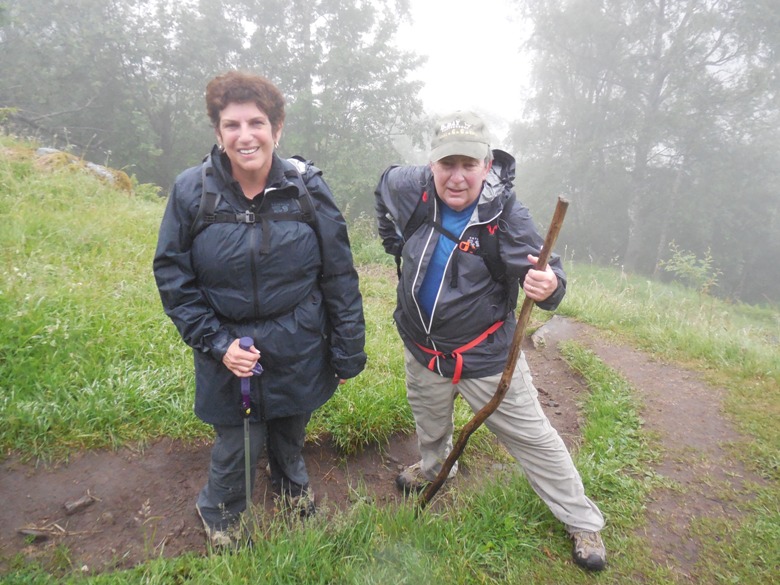 GEIRANGER, Norway (Day 6 of 9) — Who needs a water slide—when there is a grass slide.

We’re at Westeras Farm, which has been in the Westeraas family since the 17th Century, with the Adventures by Disney group touring Norway, high above the small town of Geiranger famous for its Fjords (there are three cruise ships in port today—thousands of people descending on a town of just a 230 people.)

Hike in the rain to farm atop Geiranger

We’d hiked an hour up a steep, rocky trail in the rain to this “summer farm” — all part of the adventure, we thought, while most in the group opted for the mini bus.

Arnfinn Westeraas and his son Andreas, 14, were showing us how Norwegian farmers traditionally would cut the grass by hand with scythes, raking it together for food for the goats and the sheep.  Sometimes, they said, they’d pile it on a tree branch and send it flying down the hill—with a kid (or grown up) on top for the ride.

Westeraas explains that 15 years ago there were still 22 farms in this valley; today there are just three.   “We try to keep the tradition as long as we can.  It is the heritage that tells us who we are and where we come from.”

Try lifting the 30-plus pound can that the young teenage girls would carry down from the higher grazing land after milking the goats. They had to hike round trip daily!

Six- year- old Sara Sofia Guthmann, from Chicago, is thrilled to feed the baby goats and meet the resident llamas.  She’s not a bit fazed by the drenching rain.

Fun doesn’t stop on vacation when it pours, especially in Norway.  It helps of course to have a rain jacket—and Adventures by Disney provides extra ponchos (they think of everything!)

We’re treated to a traditional Norwegian lunch—fish or beef soup, fantastic homemade bread dusted with rosemary, thyme and sea salt, and a pudding made from sour cream that is served with raisons, cinnamon sugar and butter called Rommengrot that is traditionally served at holidays—and to celebrate, like after the fall harvest.

This farm has been hit by avalanches several times and rebuilt, we learn. Westerhaas tells us how his great aunt survived an avalanche as an 11 year old—by landing in a tree

It is interesting meeting this family but I can’t escape the feeling that the excursions on this trip are like those offered on cruise ships here.  In fact, Westerhaas says most of his business is the cruise ship crowd.

I was hoping for something different.