A real pasta machine: in the charming village of Grazie 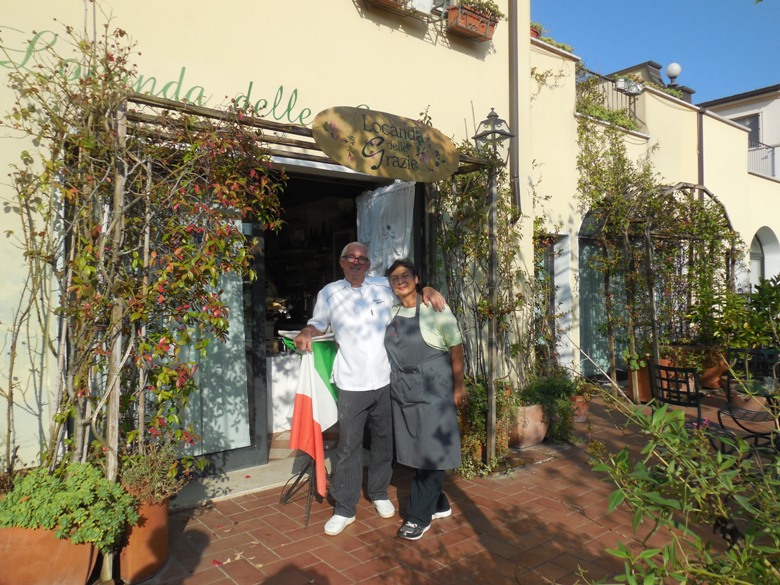 Mantova, Italy (Day Six) — “Come look at our pasta maker,” says Danieela Bellintani who with her husband Fernando own the charming small restaurant La Locanda de le Grazie in the village of Grazie just a few miles outside the amazingly preserved undiscovered

We peer into the small kitchen where a crew of three smiling young men, and Chef Fernando Aldighieri are busy making the region’s distinctive pastas completely by hand — pumpkin ravioli, cheese tortellini, strips of linguini… Fernando rolls the pasta impossibly thin on a huge wooden board so that it is two meters square. He uses the biggest rolling pin I’ve ever seen and then turns the pasta the way a pizza maker might.

We had just been treated to a sampling of the local specialties — the pumpkin ravioli that have a pear mostarda (a kind of chutney) — and even crumbled amaretto cookies, the secret ingredient, our guide Guliana Varini tells us. There is pasta with homemade duck ragout, a special rice with sausage; Cotechino — a kind of boiled salami served with sauerkraut; an assortment of the local salamis and hams, and the most amazing breadsticks and rolls—all freshly made, of course. We sample the local Lambrusco wines.

The couple’s daughter Anita, tells me they are going to start to offer cooking classes — people could either spend the night in their small Bed and Breakfast, or a family, for example, could come from Mantova where we are staying in the Palazzo Castiglioni that dates back to the 13th Century.

“My father says if you don’t share your recipes, they just die with you,” says Anita Aldighieri — her English honed on an exchange program at Yale — when my cousin asks for the recipe for the breadsticks.

There are hand-crocheted doilies and menu covers; a recent picture of the family with Pope Francis. It seems Danieela Bellintani was divorced many years ago. Her daughter Anita explained that Danieela has long been troubled that she couldn’t take communion because of her divorce and remarriage. When Francis became pope, she wrote to saying she hoped he would do something for families like hers. He invited the family to Rome for an audience and told her “not to worry about it.”

Grazie, along a protected area of the Mincio River, is famous for its church Santa Maria del Grazie. Even before the church was built at the beginning of the 15th Century, pilgrims came to pray for miracles including Franceco I Gonzaga, the ruler of nearby Mantova who prayed for a miracle to stop the plague that was killing so many in the city. He pledged to build a church if his prayers were heard. The plague abated and in five years, the wooden church was finished. It’s amazing it is still standing!

There are the strangest wood statues of those whose prayers were heard — one man about to be beheaded but the executioner can’t raise the mallet; a man about to be hanged when a beam breaks; a man fished out of a well by soldiers who have returned from battle—52 statues in all. There once were soldiers in their medieval armor but once that armor was determined to be original, the statues were removed to a museum, explained our guide Giuliana Varini, who often tours school groups and notes this is one church it’s not difficult to engage the kids.

Perhaps the strangest thing — and what kids love most — is the embalmed crocodile hanging from the ceiling that has been determined to be at least 500 years old —believed to be part of a collection of natural curiosities that was donated by the church.

Baldassare Castiglione, the Renaissance author, his wife and son are all buried here—as he had requested.

There is a group of elderly citizens praying; another family with kids crowded into a pew. “For many people this place means a lot,” said Giuliana.

Every August, thousands make a pilgrimage of a different sort to this little village for the Madonnari (street painters) festival. Artists from around the world are chosen to create “living paintings” out of chalk on 10 foot x 10 foot squares of pavement. The challenge is the theme — something that relates to the church and the miracle-making Madonna. (Santa Barbara now has a sister Madonnari festival in the spring.)

Here during the festival the lilies and the lotuses are in bloom; people take boat trips on the river to see the flowers and all the birds — this is a preserve; they ride on the bike path that begins in Mantova and continues past Grazie to the next village.

Thousands come to see the art, eat the local specialties and pray for whatever miracle they need in their lives.

I’d be happy to come back just to get a pasta-making lesson from Fernando Aldighieri.