A Spring Skiing Adventure at Heavenly and Kirkwood ski resorts 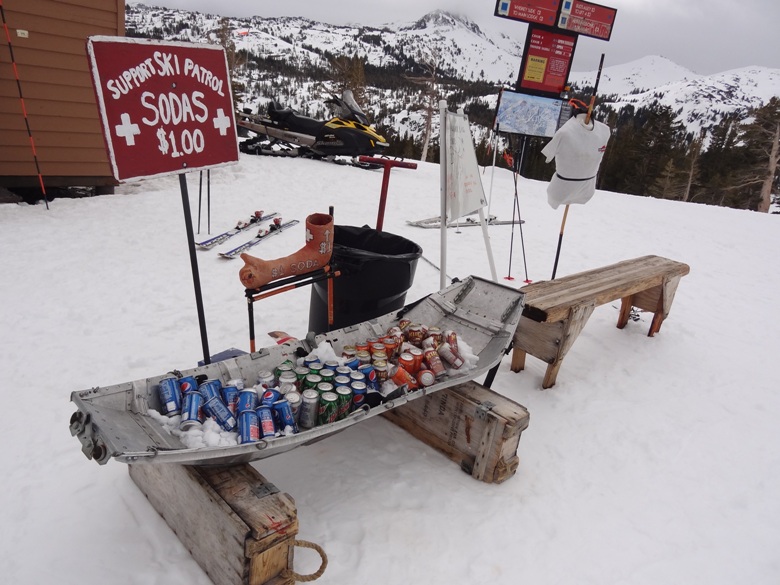 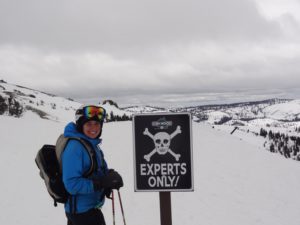 After getting news of a spontaneous spring break from work in late March, my boyfriend, Dan Foldes, and I decided to spend our time off by retreating from the city (in our case, San Francisco) and head off on an adventure to the mountains. We both are avid skiers, and have been waiting for just the right time to head to Lake Tahoe this past winter, and now spring.

The California snowfall had not been very heavy all winter (many of our friends would return from the mountains saying that they had done more hiking than skiing most of December and January). However, March was the best month of snow in Tahoe. And, we were excited to do some good hard skiing in South Lake Tahoe at Heavenly and Kirkwood resorts, both of which we had never been.

Capitalizing on the incredible conditions, the majority of the Ski Lake Tahoe resorts have announced they will be extending their seasons with most aiming for the end of April and a few continuing operations into May. Heavenly and Kirkwood extended the season until April 29 and you can ski the rest of the season free if you buy a season pass for 2012-13.

After spending three early-morning hours driving from San Francisco to the beautiful snow-draped Sierra Nevadas, we were treated to a, well, “heavenly” view of blue skies, white mountains, and turquoise water as we ascended the Aerial Tram at Heavenly Ski Resort. We both agreed that this ski area had been aptly named. We looked out over the giant span of beautiful Lake Tahoe from the top of the mountain and watched the Heavenly ski patrol line up for a photo with all of their avalanche rescue dogs. It must have been one of the most breath-taking views I have ever had at a ski resort!

The mood amongst our fellow skiers on the Thursday when we arrived was quite pleasant and cheery.  Although Heavenly’s – and indeed California’s – snowfall this year has been decidedly light, Wednesday had seen a good accumulation of snow, so conditions were good for bounding around on the slopes.  Upon exploring the mountain on our first few runs, we were struck by Heavenly’s vast amount of terrain. Friendlier than normal lift operators were happy to tell us where the best runs on the mountain were.

Our exploration eventually led us to the remote Killebrew Canyon area, where we were treated to fresh tracks and a peaceful traverse out, overlooking the infinite Nevadan plain below. We spent most of the rest of the day skiing the challenging chutes of nearby Mott Canyon as well as the fun, moderate runs off the Dipper Express lift. I decided to warm up with a hot drink at East Peak Lodge while Dan did a few more runs, and was excited to have free refills of hot chocolate with endless amounts of whipped cream and mini-marshmallows!

Après ski, we took the gondola down to Heavenly Village and wound down around a warm outdoor fire pit at Restaurant Fire and Ice. We enjoyed their happy hour special with bloody Mary cocktails. We then decided there was no better way to spend our night than to see “The Hunger Games” at Heavenly Village Cinemas. A fan of the books, the movie did not disappoint!

We got to bed early to rest up for another big day at nearby Kirkwood. We had heard a lot about its extreme terrain, and were super excited to finally see for ourselves the steep slopes Kirkwood had to offer. We arrived right as the lifts opened and immediately headed up The Wall lift. The snow was soft and the slopes were steep as we challenged ourselves to ski fast and try some new routes. We especially enjoyed skiing down Eagle Bowl and Headwaters. From The Wall, we headed over to Sunrise lift for a few runs, and got a chance to spot some extreme snowboarders getting ready to take part in The North Face Masters of Snowboarding competition. 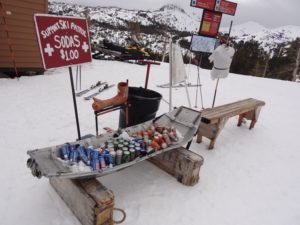 On our way back over to the Mountain Village Area, we ran into one of the happiest dogs in the world, a member of the Kirkwood Ski Patrol! We spent the rest of the afternoon skiing on the Cornice Express Lift, finding stashes of fresh snow, tight cliff tunnels to squeeze to, and mini-cornices to jump off of.

Not wanting to leave, we decided it was time to hit the road back to San Francisco. But, we cannot wait to come back next season to explore the extreme terrain of this mountain way more. Here’s to some late season snow, and a beautiful spring break in Lake Tahoe!