A tasty tour of the historic Jewish quarter in Budapest 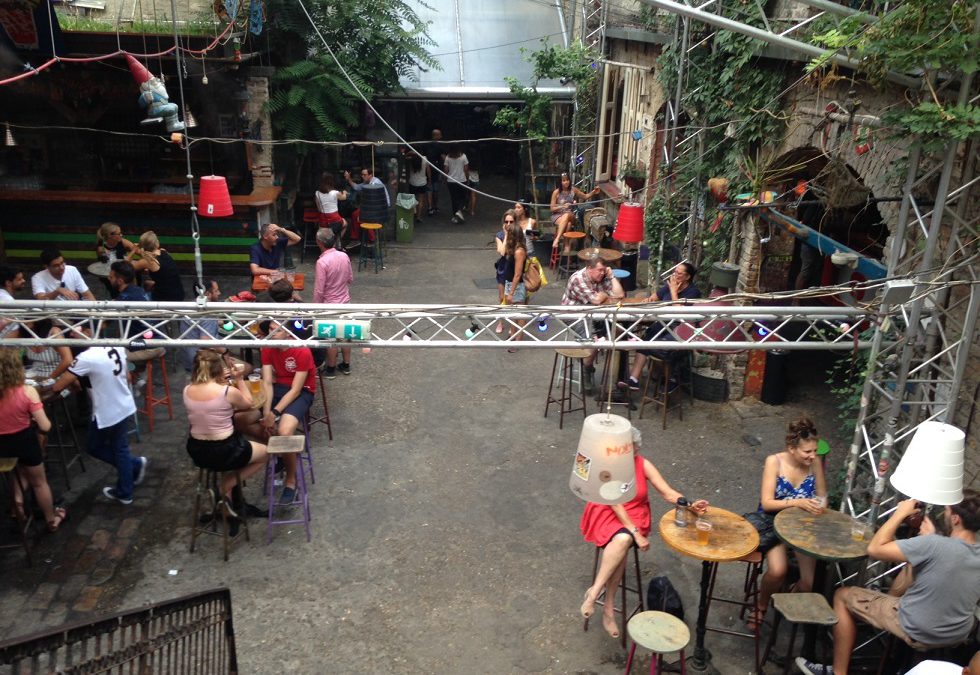 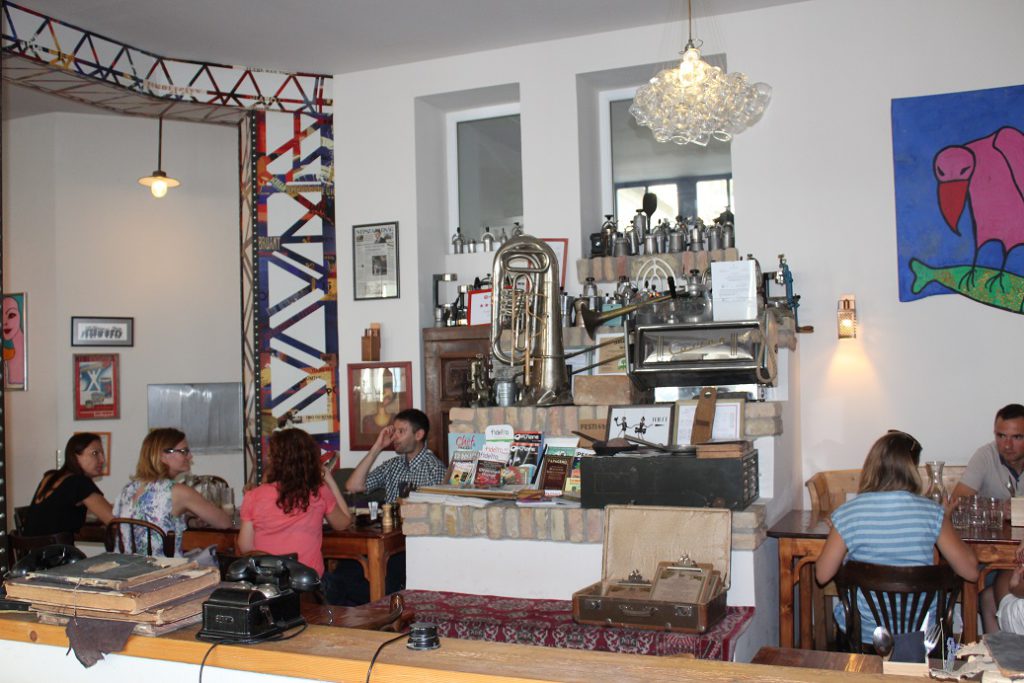 Maybe it’s the “Jewish Ball,” chopped goose liver with egg and onion—which we Americans more commonly make with chopped chicken liver. Or Cholent, a stew Orthodox Jews would make for Shabbat because it could be prepared ahead—ours with Goose legs.

It might seem strange to be eating our way through Budapest’s historic Jewish quarter on a food tour—a place where thousands died during the Holocaust. In two months, 400,000 were deported in 1944; before the Holocaust, there were 700,000 Hungarian Jews, today just 100,000. 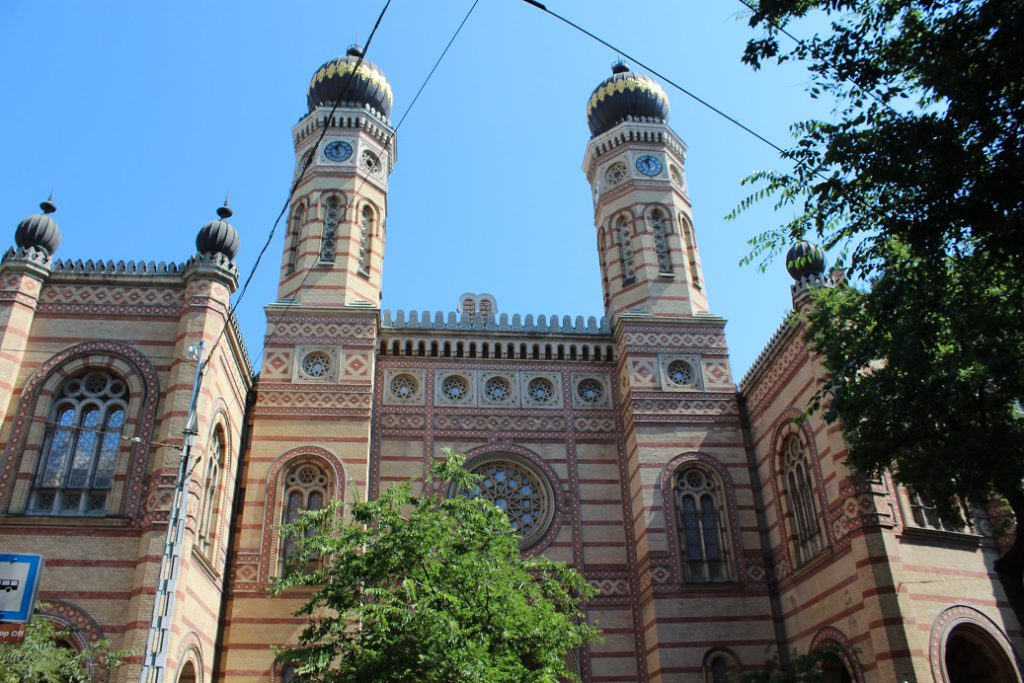 The Grand Synagogue in Budapest

But our 30-year-old Taste Hungary guide Eszter, the granddaughter of Holocaust survivors who asked that her surname not be published, explains that not only has food always been an important part of the culture here, but when her grandmother, as a teen, was sent to a concentration camp, she was “always eating in her head.” Thinking of the foods she had so enjoyed, Eszter said, helped her, even when she was barely surviving. After the war, when two aunts brought her home, she told them she didn’t even want to wait for them to warm up the sugar-covered dumpling, she wanted it so much.

Food, of course, is a wonderful entrée into any culture and Taste Hungary, run by an American-Hungarian couple, Carolyn and Gabor Banfalvi, offer a variety of food tours including this one and a wine or craft beer tasting that includes local cheeses and meats including the popular and delicious smoked cheese called Parenycica at their Tasting Table wine shop.

The historic Jewish quarter, we learn, is today as much a hipster neighborhood with Ruin Bars like the best known, Szimpla Kert where we went last night. These bars were built in the ruins of abandoned buildings—an underground bar scene–“They didn’t spend a lot on fixing up the buildings or decorating because they didn’t know when the building would be sold,” explained Eszter .

But the artsy, funky courtyards became so popular that some of those who started them bought the buildings, keeping the vibe the same. All around are small trendy restaurants so that on Shabbat, you might see hipsters and Orthodox Jews (there are only 100 families who still observe at the Orthodox Synagogue) sharing the same street. 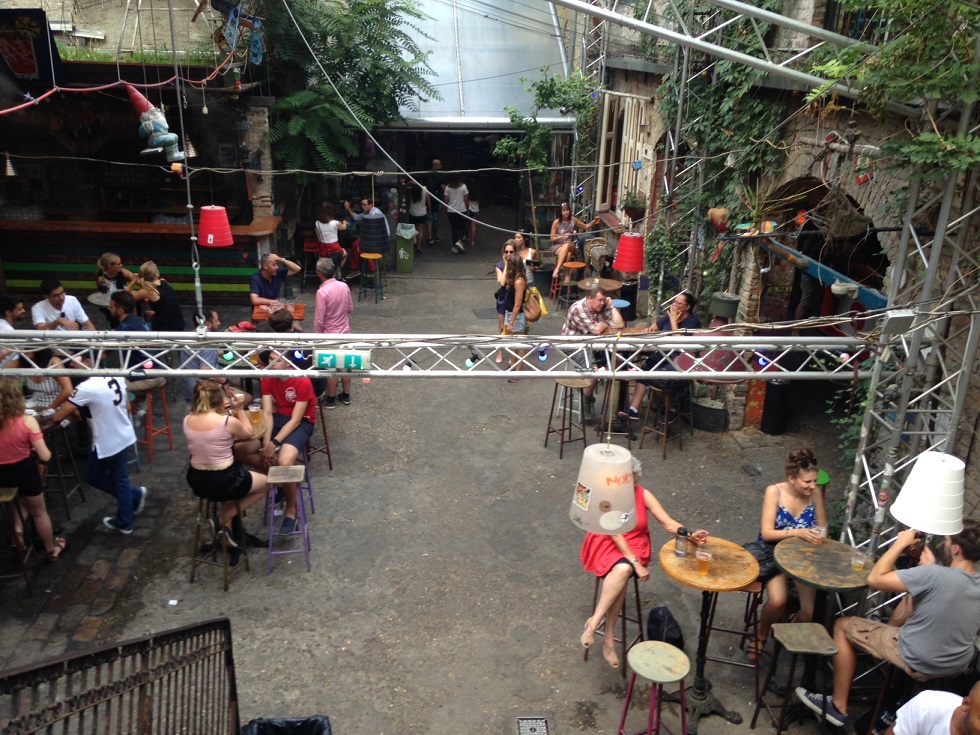 Budapest is a beautiful city—one recognized as a 2017 favorite among European cruisers polled by CruiseCritic.com. But a tour like this, enables us to get beyond the typical tourist sites, as wonderful as they are—the castle, the parliament, the boat ride on the Danube.

We are here because tomorrow we are joining an AMA Waterways river cruise on which we will be biking with a group of families from Backroads, the adventure company. AMA is working hard to show that river cruises have much to offer active travelers—biking and hiking excursions. The Backroads partnership is part of this effort, as is a partnership with Adventures by Disney offering kid-friendly trips. I love river cruises because there is no need to move hotels or pack and unpack for a week as we explore a region—in this case traveling the Danube from Budapest to Passau, Germany from which we’ll shuttle to Prague.

Here in Budapest we spent one night at apartments run by Brody House, a small 11-room eclectic hotel a short walk from the Grand Synagogue, known for its art (all is for sale) individually decorated rooms, artisanal furniture and efforts to connect locals and travelers with sessions on film, music, art and literature. The apartments where we stayed were in the heart of the hipster area at the edge of the historic Jewish quarter full of young locals. Brody House also has The Writer’s Villa up in the Buda hills that can sleep 16 people and dates from the late 19th Century.

Our second night, we are ensconced at the Hilton on the Pest side (Budapest is divided by the Danube—Buda on one side; Pest on the other) high on the hill where the famous castle is located. I can see its turrets from our window as well as the Danube. 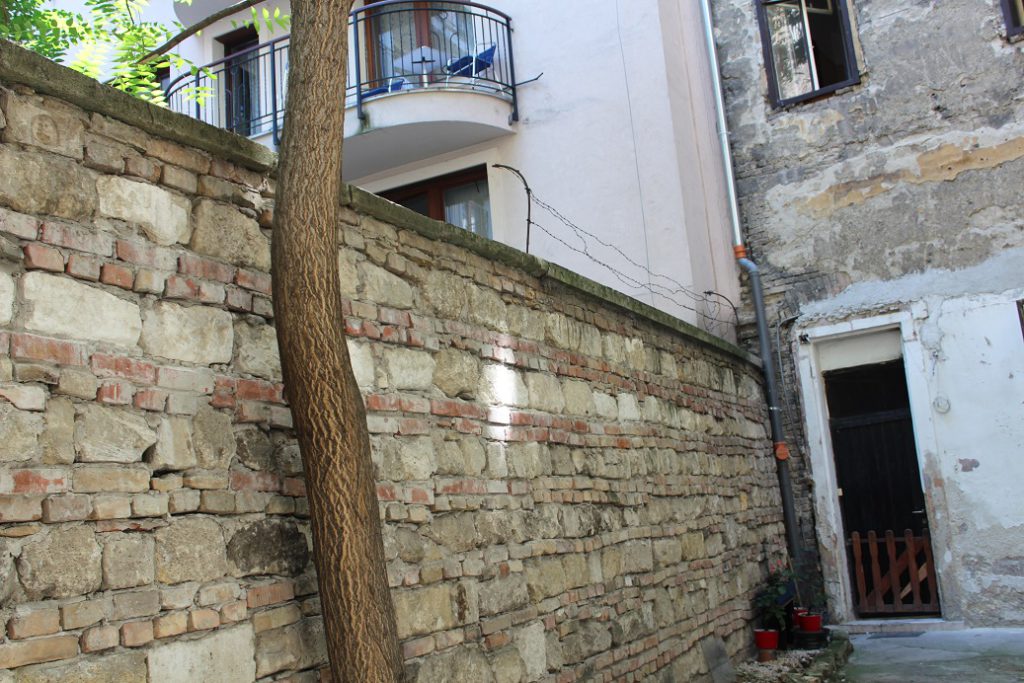 Eszter reminds us how one person could and did make a difference during the Holocaust—showing us the memorial to Raoul Wallenberg, the Swedish diplomat who saved tens of thousands of Hungarian Jews in 1944 by issuing special passports and sheltering families in buildings designated as Swedish territory. Sadly, he disappeared in 1945 during the Siege of Budapest by the Red Army. No one knows what happened to him, although he is assumed to have been killed.

Other less celebrated “silent heroes” are also remembered, Eszter said—a priest who hid Jewish children, Carl Lutz; a Swiss Vice Counsel in Budapest credited with saving half the Jewish population here by preventing them from being deported,  Jane Haining; a Church of Scotland missionary who worked to hide Jewish girls among her students and was sent to Auschwitz where she died.

“My grandmother was just 15 when she was deported…she didn’t know what was happening,” Eszter said. “She took her high heeled shoes with her.” It took her more than a year to recover—the only reason she survived, Eszter said, was because two stronger girls from the countryside helped her.

Unlike the children and grandchildren of other survivors, Eszter said, “I grew up knowing all the stories.”

Hearing her story and accompanied by my son-in-law whose grandparents left Hungary in the late 1930s—made walking these streets even more meaningful.  We hear about the forced laborers—only one in 10 men who were sent returned home–see a remnant of the ghetto wall–250,000 people in the winter of 1944 were forced to move in these walls, two families or more sharing one room–and also talk about what happened to Hungary after the war when the Communists took over.

We end the tour on an upbeat note—tasting wine at The Tasting Table, owned by the Banflavis. Hungarian wine, though delicious, is little known outside the country with 150 grape varietals “because we drink what we make,” says sommelier Gergely Radvanyi.  We sample sparkling, white, rose, red and dessert brandy as well as the Unicum, a strong aperitif commonly drunk in Hungary.

After checking in at the Hilton with its amazing views, we head to the Four Seasons for dinner at the Four Seasons Hotel Gresham Palace, recently named the best European city hotel by Travel + Leisure’s readers. It’s easy to see why—the beautiful 1906 Art Nouveau building overlooks the Danube. During World War II, it was used as barracks for the Red Army and was in sad shape for the next six decades. It opened as a Four Seasons in 2004.

We loved the casual but elegant ambiance of the Kollazs brasserie—the fact that kids are welcome (there is Weiner Schnitzel with roasted potatoes among the kids’ offerings and milkshakes, as it is summer).

As my kids on this trip (my daughter and son-in-law) are grown, we start with some of the restaurant’s signature cocktails. I especially loved the botanical gin and tonic.  Then we had sea bass baked in salt—delicious! Octopus and scallops, cauliflower gratin and ending, at the waiter’s suggestion “French Toast” with rhubarb and wild strawberry sorbet.  The restaurant has a rotisserie and charcoal grill so we could have opted for roast duck, steak or lamb topped with a choice of sauce.  Yum!

“I guess she could drive,” we say very fast.  In Hungarian, that’s “Cheers.”