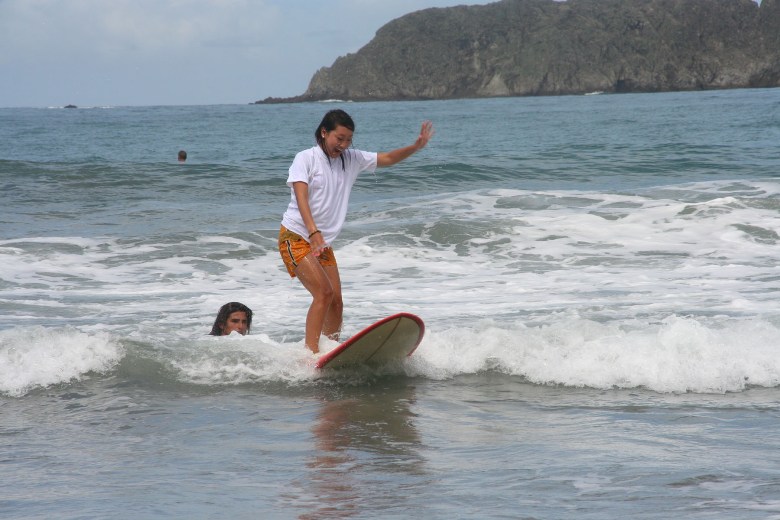 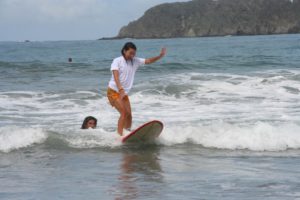 Soccer turns out to be the only language the kids need.

After a morning of white-water rafting (and plenty of water fights) on Costa Rica’s Sarapiqui River, and a first-rate burrito lunch made by our raft guides at the river’s edge, we stop in the small town of Horquetas, about 10 minutes from where we are staying to visit an elementary school. Some 270 kids attend the ill-equipped school, which is so overcrowded that children must attend split sessions. The students mug for our cameras and giggle.

Such school visits — and the chance to become pen pals with the children here — are hallmarks of the guided trips arranged to Costa Rica and other countries by Boston-based Thomson Family Adventures (www.familyadventures.com). “Sometimes it is a little awkward to bring kids together like this from different cultures,” says our guide Gaston Trujillo. “But the awkwardness is part of the experience. It’s very good for all of them to see that kids are just kids, no matter where they come from. All of them will realize that there are many things that connect them that are stronger than language.”

All shyness evaporates on the soccer field where some 18 kids of all ages — the nine in our group and nine from the school — divide up on teams. There are no shin guards or nets in the goal posts; the field is made of cement, but they laugh and run and kick the ball as if a championship depends on it. Other youngsters from the school join us on the bleachers to watch. We wish we’d brought them some soccer equipment from home.

Afterward, several of the local children join us for a horseback ride through the rain forest at the Sueno Azul Resort (http://www.suenoazulresort.com/) and a swim at the spectacular natural pool built in the resort’s private rainforest preserve, complete with waterslide and waterfall. The girls whoop and jump in the water, slide down the water slide like a giant gum chain. It doesn’t matter if they speak English or Spanish, if they are from American suburbs or small Costa Rican villages. Fun is the same in any language.

Four families, including me and two other moms traveling solo with kids, nine girls in all ages 8 to 16, (our guide tells us he’s never had a trip with just girls!), have signed on for this high-octane Costa Rican tour with enough adventure guaranteed to keep even the most jaded teens and tweens engaged. The kids have a chance to do everything from watch sea turtles nest on a beach at night (more about that in another column) to zip line through the rain forest canopy. In the morning, time is spent learning to surf at the Manuel Antonio Surf School; the afternoon is for kayaking on the Caribbean side of the country. (It takes us just 35 minutes to fly across Costa Rica in a 19-seater plane, an adventure in itself.)

On the beach, the kids cavort with white-faced monkeys and snap numerous photos of sloths, iguanas and birds. They get up close and personal with hundreds of butterflies at La Paz Waterfall Gardens (www.waterfallgardens.com), one of the largest butterfly observatories in the world. At the remote Pachira Lodge in Tortuguero (www.pachiralodge.com), they wake up to howler monkeys making a racket outside their room, shop at an open market in the pouring rain and, at one lodge, make friends with newborn kittens.

“This trip is fabulous,” declares Sally Garrett, a single mom traveling with her two daughters and a friend. “It’s so different than anyplace we’ve ever been and we’re doing so many different things than we’ve ever done.”

If they were traveling solo, they wouldn’t have the chance to do nearly as many different activities or learn so much about Costa Rican wildlife and culture, adds Patti Zebrowski, who has left her older daughters and husband at home in Portland, Ore., to take a special mom-daughter trip with 12-year-old Emily Wolfram before she starts seventh grade.

There’s also the advantage of having other kids the same age around. By the second day, several of the girls are eating every meal together, with the adults at another table.

Another plus: “We don’t have to negotiate what time we’re getting up or what we’re going to do,” said Jeff Purnell of Los Gatos, Calif., he’s traveling with his wife Cathy and three teenage daughters.

No worries either about anything, from snacks and drinks for the kids to towels for the beach to where we’re eating dinner or what we’re doing each day. Each evening, our guide tells us what we’ll need for the next day down to which kind of shoes to wear. He makes sure there’s always something on the menu the kids will like. A second guide, 25-year-old Shirley Sequera is on hand to do special activities with the girls (anyone want to make bracelets?) or play with Sarah Kate Garrett, 8, when she can’t quite keep up with the older girls. “They make it so stress free that I can enjoy everything too,” says Sally Garrett.

I’m traveling with my 13-year-old cousin Eva Weinberg — the trip is her belated Bat Mitzvah gift — and her friend Kayla Bratton, 14, and I, too, am more relaxed because there’s someone else to lead the way, drive (the roads here leave much to be desired) and sweat the details.

It’s easy to see why so many American families are discovering Costa Rica. (www.visitcostarica.com). There’s the opportunity for adventure, R&R, and ecotourism in a small country so safe they don’t even feel the need to have an army. English is spoken widely and the U.S. dollar is accepted everywhere. Many other outfitters, including Wildland Adventures (www.wildland.com) and Costa Rica Expeditions (www.costaricaexpeditions.com), who planned our last foray here several years ago, offer many kinds of adventure trips. Many families opt to stay in the growing number of resorts like the newly renovated Hilton Papagyo Resort (www.hilton.com) or Marriott’s Guanacaste Resort & Spa scheduled to open later this year (www.marriott.com).

The chance for such unique experiences, especially designed with tweens and teens in mind, is what sets our trip apart. The parents agree and make it worth the price (well over $12,000 for a family of four, plus air). Ask about new itineraries for next year (www.familyadventures.com). That’s not to say it’s perfect. Some kids complain about the bugs and the humidity. Sixteen year-old Amy Purnell misses her friends. “This trip is just too long,” she says.

But by the end of the week, the kids have had so much fun in so many different places that none of them can choose a favorite.

As we leave for the airport, Sarah Kate Garrett clutches her prized souvenir, a big wooden snake. “I wish the trip was just starting,” she tells her mom. I know how she feels.

For more about Eileen’s Costa Rican adventure, read her TRAVEL DIARY elsewhere on this website.