A two-week trek to Chile – DAY ONE: Valparaiso 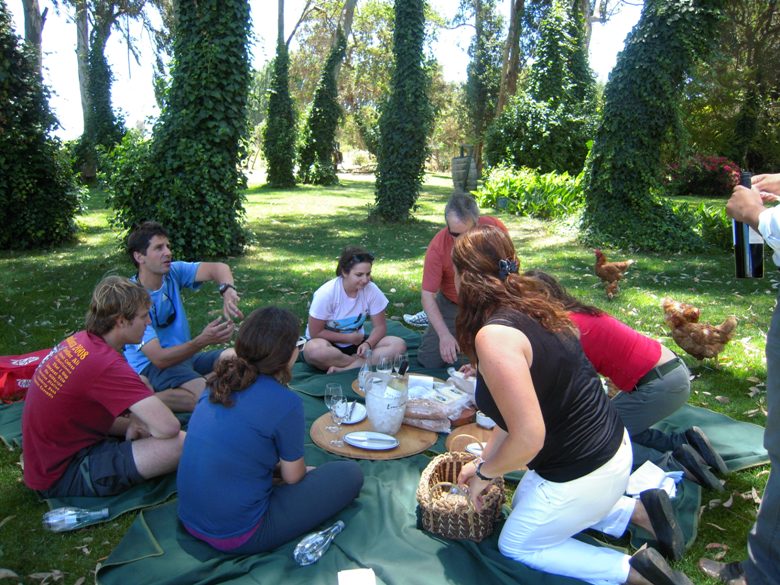 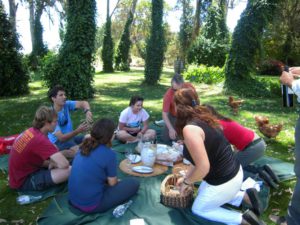 We picnic at a winery near Valpariso Chile

DAY ONE — Smell the Eucalyptus!

We are sprawled under giant eucalyptus trees, chickens squawking as we tuck into a picnic (our trays are the tops of oak wine barrels—at the Emiliana Winery, which makes only organic wines in the Casablanca Valley—one of Chile’s big wine-growing regions about 22 miles east of Valparaiso.

We eat organic cheese, olive bread, prosciutto and of course wine as the chickens—who we learn earn their keep by eating “everything that moves” in the dirt of the vineyards–hover hoping for bread scraps which we can’t help but provide.

It is a perfect blue sky warm day—it is summer here in Chile—and we have spent the morning on bikes  past rolling hills, vineyards, little towns, an occasional horse and cow first to one vineyard (Casa de Bosque) and then another this organic winery (Emiliana) which we are told is the first certified organic winery in Chile. We taste sauvignon blancs which this region is known for As well as chardonnays, syrahs, pinot noirs and blends. Yum!

It is our first full day in Chile after an unexpectedly pleasant flight on LAN Airlines (They serve decent meals, even in coach and offer a good choice of movies!  www.lan.com ) and the day couldn’t be better, thanks to Santiago Adventures (www.santiagoadventures.com), which is owned by American Brian Pearson—a new dad originally from Vermont.

It’s ideal for my adventure-loving crew– my husband Andy, daughters Reggie and Mel and Reg’s boyfriend Dan Foldes. Unfortunately, my son Matt couldn’t leave his job for this adventure. But I’ve learned as the kids have grown older not to fret when everyone can’t make a trip. There will always be another opportunity.

So here we are. We spent the night in the20 -room Casa Higueras (www.casahigueras.com) which is high in Valparaiso’s hills in a restored 1920s mansion. Our room boasts a spectacular view down to the port, dark wood beams and a big tub ideal for soaking after the long hours on the bikes. Before dinner, we toast the beginning of our adventure with a Chilean drink Pisco Sours made with local grapes, lemon juice egg whites, bitters and Pisco (a type of brandy). It tastes like a cross between a Margarita and a Whiskey Sour.

We enjoyed a gourmet feast accompanied by local wines—from fresh ceviche and clams to grouper to osso bucco and crème brule , the lights of the port city laid out before us like a giant jewel box, tall heaters keeping us cozy in the evening chill.

Before dinner, we’d walked some of the crooked and winding streets that are home to artists and until he died, writer Pablo Neruda.  Murals and graffiti art decorate many walls outside. We stop to browse in an art gallery here, a shop of woolens there. The high point was riding the city’s famous funiculars—about fifty cents each—first down a steep 100 feet hill and then up another one before dinner. Better than Disney World, we joked. And a lot cheaper!

Certainly a trip here is not easy or inexpensive—an 11 hour flight from New York to Santiago and then a 90 minute ride to Valparaiso that is at once arty, funky and dirty with shanties adjacent to fancy homes. I love it!

This morning, after breakfast at the hotel our amiable English-speaking Santiago Adventures guide Reto Stockli—he tells us he is Swiss but ended up here ,married with two young children, after he met his Chilean wife while vacationing in Patagonia more than a decade ago—picks us up with a driver Patricio Lavin. A bike trailer behind the van, we wind our way through the narrow streets of Valparaiso and out in the countryside where we get on our bikes at Lo Ororosco.  We ride through the countryside to Casas del Bosque winery, then thru Casablanca Village and on to Emiliana Winery—a little more than 30 KM in all. The van follows us, which is a good thing for me when my bad knee starts to ache, I hop in the car.

Brian Pearson, who owns Santiago Adventures, told me on the phone that Chile is an easy country to travel and very safe. “You don’t even have to speak Spanish because enough people speak English and they are so friendly.”

That certainly is our experience—people waving as we pass on the bikes.  Lorenzo Castasner gives us a tour of the Emiliana organic winery.  He explains how the alpacas (they are so cute) are let lose to graze in the vineyards to eat the grass while the chickens eat the insects. The vast majority of the grapes here are white. It is a bucolic spot–alpacas including two new born babies–grazing, chickens, the neat rows of grapes, the mountains in the background. After tasting four wines, no wonder we sleep all the way back to Valparaiso.

Chileans eat dinner late so after a nap and a shower, we’re ready to hit the town–this evening  a restaurant called La Concepcion which is owned by an American couple, Judith Van Daam and Robert Gerrity (http://www.restaurantlaconcepcion.cl/eng.html). We settle in on a terrace full of flowering plants and vines and are given soft shawls to ward off the chill.

Gerrity explains he and his wife brought his two daughters to Chile ostensibly for a year to learn Spanish. Instead, they stayed and have been going back and forth now for more than 20 years. Their two daughters are grown, went to college in the United States and now live in Los Angeles.

“Valparaiso is a special place,” he says. “It’s youthful, artistic and hip.”  The two have only been in the restaurant business for the past five years and by the numbers of customers dining contentedly, they are doing well. The food is delicious—Ostrich Carpaccio, three types of ceviche, all varieties of fish. My husband tries filet of ostrich over asparagus risotto while one daughter has duck and Dan eats crab and almond ravioli—all of the pasta is homemade; the meats from local farmers.  Deserts were yummy too–crème brulee, warm chocolate brownie with raspberries, chestnut flan—served with a local desert wine.

We practically roll back to the hotel. Tomorrow we head to Patagonia. Penguins here we come!