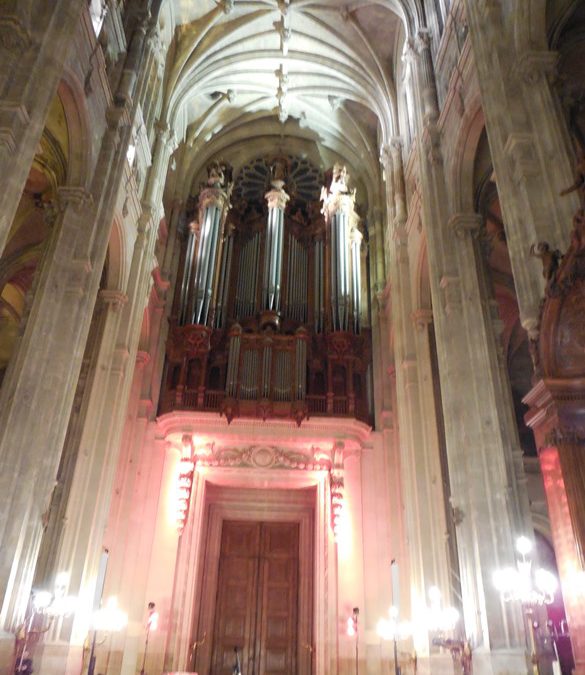 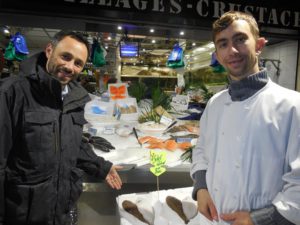 DAY 11 – PARIS — Eclairs are the new thing.  In fact, we visit a shop called L’Atelier de L’éclair on the rue Bachaumont where all they sell are delectable eclairs—strawberry, caramel, chocolate…

We’re touring this hip foodie neighborhood with Edouard Morhange who live nearby and is on the board of the Paris Greeter organization, which offers some 3,000 free tours every year given by 360 greeters.  Morhange, an engaging 40 year-old with two kids, says Paris has more volunteers than any other city.

“Every year it is growing 15-20 –per cent here,” he said.  “The French,” he concedes, have a reputation of not welcoming tourists… we want to show that is not the case,” he explains.

Today, there are greeters in 30 major cities like Lyon, Marseilles and Bordeaux, and smaller towns like Versailles.

“When I see travelers who are lost and Parisians aren’t very nice, I feel ashamed,” he said.  They’ll help if you ask, but if you are in New York, he said, and are looking at a map, someone will ask you if need help.

The best part of these greeter tours—besides meeting locals—is that they are free.  All you need to do is sign up in advance online.  They are given in many languages with the largest number of requests coming from Americans and Canadians, many with kids.  Greeters must commit to doing six “greets” a year. 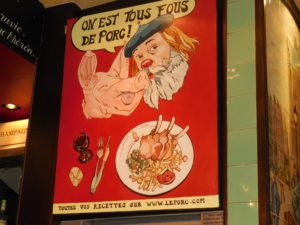 At a meat market on the Paris Greeter tour

Morhange meets us at 5 p.m. outside the Sentier metro station near where he lives and shops in Les Halles neighborhood in the heart of Paris.  He shows us the Rue Montorgueill—the cobblestoned pedestrian street that now is known for its food shops and restaurants.

He explains that this historically has been a “foodie” neighborhood because until Les Halles –the biggest in France–was moved to the suburbs in 1970—people came here to buy and sell food.

“The streets are just like they were in the 19th century,” he said though today filled with price y apartments.

We stop at Eric Kayser, where Morhange buys his bread.  There is a line out the door.  In France, he explains, there are some 80 different varieties of bread.  Designed for eating with cheese, with fruit or toasted for breakfast.  “We eat a lot of bread,” he explained.  “But it is better than before.”

Did I mention we are shopping for dinner on the best foodshopping street in Paris?  We are staying near the Arc de Triomphe in an Apartment in the Hotel Majestic  in the residential 16th arrondisement, a short walk from the Champs Elysee, courtesy of Exclusive Resorts, a private club for luxury digs, complete with a personal Ambassador to help plan restaurant reservations, museum tours, even what kind of wine and juice you want in the fridge when you arrive. There’s nothing lot not sweating the details to de-stress a trip to Paris!  And after a week of restaurants and eating on the Avalon Waterways river Cruise, we’re thrilled to have dinner “at home.” 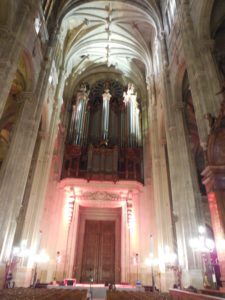 We  buy rotisserie chicken and potatoes—Morhange explains that is a typical quick weekday dinner or Sunday lunch for Parisians.  There are all varieties of cheeses, fruits and vegetables, fresh fish and poultry.  There is rabbit, ducks with their heads still on … delectable chocolates and macarons of every color.  There are quiches and salads

He points out signs on the buildings dating back more than a century—one for a shop selling poultry and one for horsemeat.  There is the oldest chocolate shop in Paris—Stohrer, founded in 1730 and still in business but expensive.  “I buy cake here for special occasions,” said Morhange. We save our Euros for the equally pricey éclairs.

We pass historic brasseries where writers gathered for oysters and stop at the Eglise St. Eustache, a church with the largest pipe organ in France with 800 pipes and dating to the 12th century. The acoustics are so good that there are concerts here all the time.  You won’t find tourists here, he said.   Indeed, mass is going on and they are getting ready for a concert in another part of the church.

We pass what will be the new Les Halles (the old one was torn down), scheduled to reopen in a year or so with plenty of green space and shops.  Unlike the shopping mall at the Louvre, this one is geared for local Parisians.

We stop for a glass of wine at a small café called Le Couchon with painted tiles from the old Les Halles decorating the walls. At the next table, the two men are playing with their pooch—very common in Paris.

Paris , a city of 3 million, gets something like 20 million visitors a year said Morhange.  We saw that first hand at the Musee D’Orsay with crowds out the door in the rain.  I was glad we had the Paris Pass that allowed us to skip those lines!

But French people, he explains, are not used to connecting with strangers.  They love their city and are proud to show it off—neighborhood by neighborhood.  “We understand why they are coming from so far,” he explains.

We invite Morhange to visit us next time he is in New York; I promise to send his kids one of my City Guides for kids.

We head “home” on the metro clutching a baguette, just like a Parisian, and the rest of dinner.