A visit to see the biggest Budda in the world 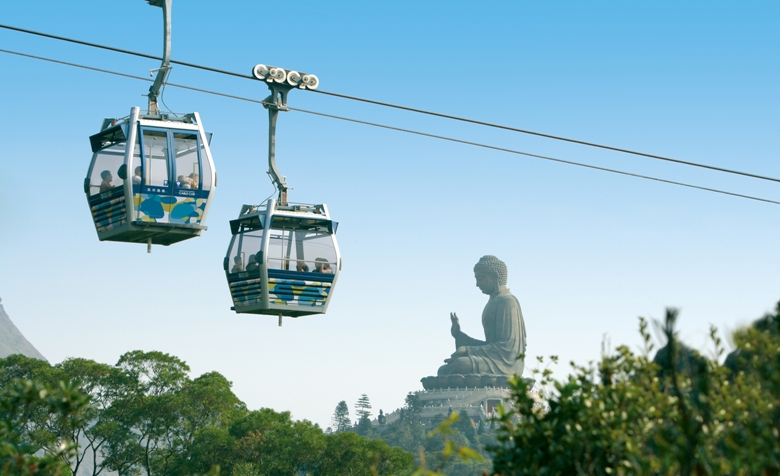 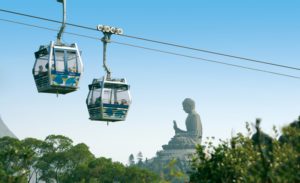 The biggest budda statue in the world near Hong Kong

I’m at a magical place where people come to make wishes come true.

No, not at Walt Disney World, though Disney Hong Kong isn’t far. I’m on the island of Lantau, Hong Kong’s largest, staring up at a giant Buddha.

Not just any giant Buddha but the Tian Tan Buddha, the world’s largest outdoor sitting Buddha — some 98 feet tall and weighing 250 tons, his humongous right hand raised to deliver a blessing to all. My daughter Mel and I are up on a high plateau with spectacular mountain views — the famous Po Lin (the name means precious lotus) Monastery is 2,421 feet above sea level — at the spot where millions come to say prayers and make wishes to the Buddha. Monks, I’m told, pray precisely here because there seems to be an echo. I try to imagine the trucks that brought up the pieces to build the Buddha — one ton at a time.

This also is one of the craziest juxtapositions of ancient customs and 21st-century marketing I’ve ever seen — starting with the route to get here.

To get here we took the Ngong Ping cable car — at 3.5 miles, the longest cable car route in Asia. The cable cars have become one of Hong Kong’s top tourist attractions since completed in 2006. In fact when we leave, the lines stretch so long that people will be waiting for hours for the experience. (You can book tickets online, www.np360.com.hk, and reach the cable car via public transportation or taxi (about $30 from Kowloon). Closed temporarily for maintenance, the cable car is expected to reopen in early April.)

When we get off the cable car, we walk through Ngong Ping 360, a small tourist village, where you can buy everything from dinosaur-shaped dumplings and plush pandas to decorative chopsticks and Chinese-style clothing. If you’re hungry, you can take your pick from Subway and Starbucks to suckling pig. Our guide Wing Lau tells us, locals come here for a family day away from the crowds in Hong Kong.

There is even a multimedia “Walking with Buddha” attraction that explains the life of Siddhartha Gautama, on whose teachings Buddhism is based. Gautama was born a prince more than 2,500 years ago in what is now Nepal. Not fulfilled by palace life, he eventually left to become a monk, studying, fasting, meeting the sick and the poor. Gautama was famously seated under a tree — now known as the Bodhi Tree in Bodhgaya, India — vowing to stay until he had found the truth. After a reputed 49 days of meditation, he is said to have attained enlightenment and spent the rest of his life traveling and teaching the Four Noble Truths.

Kids like the Monkey’s Tale Theater with its animated story about a selfish monkey who learns about greed, friendship and kindness from the Monkey King.

My daughter and I agree that the juxtaposition of East and West, of ancient belief and 21st-century desire that we encounter here is evident everywhere in Hong Kong. This is the city that boasts the tallest hotel in the world (the Ritz-Carlton), the trendiest Western designer stores and outdoor markets selling knockoffs in close proximity to historic Buddhist temples, the Nan Lian Garden built in the style of the ancient Tang Dynasty with every rock, plant and building placed according to specific rules, traditional Chinese Dim Sum restaurants (including Tim Ho Wan, which has earned a Michelin star) and storefronts where for $20 you can treat your aching feet to a traditional Eastern reflexology treatment.

We chose Hong Kong for a little mother-daughter time after Mel finished a semester in Asia. We shopped, toured and indulged our inner foodies with amazing eats. For more on our adventure, read my travel diaries.

(Visit www.DiscoverHongKong.com for free locals-led activities and a terrific app you can download; I also used Lonely Planet’s Hong Kong and Macau and Frommer’s Hong Kong.)

Tourists also like to visit the islands of Cheung Chau, just a ferry ride away, to see its famous fishing village and Lamma for hiking and seafood with waterfront views. Our visit to the Po Lin Monastery was one of the highlights of our stay in Hong Kong, starting with the 25-minute cable car ride. The base of our car was glass so we had a spectacular view of not only the island but of the South China Sea and of the airplanes lined up at the nearby airport.

Since the monastery was built in 1906 — some 100 monks still live here hidden from view — Buddhists have come from all over Asia to pray, though the giant Buddha has only been here since 2001. It took more than a decade to construct.

We walk up 268 steps to get a closer look. Wow! If we’d had more time, we would have climbed to the top of the peak — the second tallest in Hong Kong.

Outside people are lighting incense and praying. Donations have poured in from locals to pay for the much grander new monastery now under construction.

Some of them, for a true spiritual experience — as well as a good workout — people avoid the cable car and other transportation to hike up a winding trail to the monastery — more than 3,000 steps — and much higher than Hong Kong’s famous Victoria Peak.

“The idea is it must be hard to get to the monastery,” our guide explains. “You have to really want to see the monastery and the Buddha,” she says. “It’s not supposed to be easy.”

Neither is making wishes come true, but it sure is fun trying.