A visit to SF’s Zeum 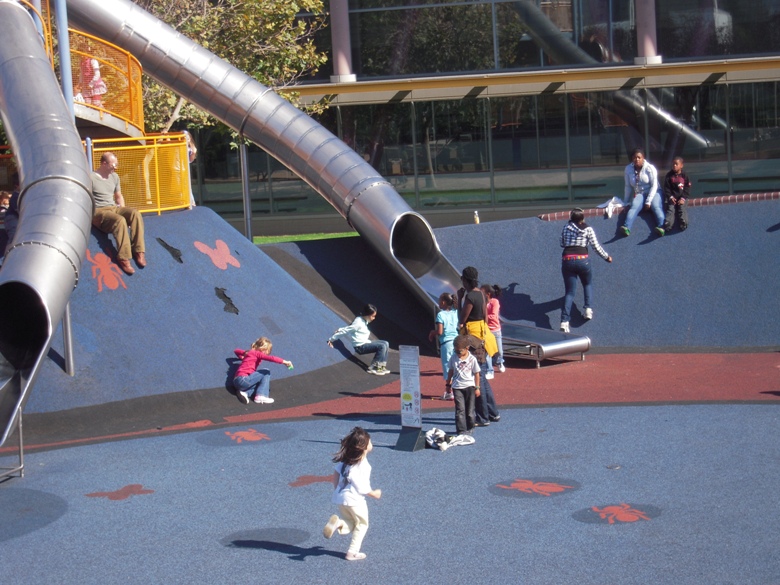 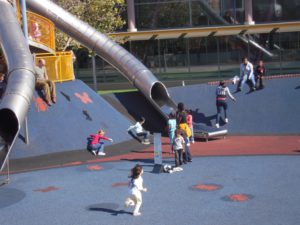 DAY TWO — Here’s one place where no one is afraid to get their hands dirty. They’re bent over tables diligently making multi colored clay figures from wire frames and assorted other creatures — dogs, sea lions, cats.

Outside, a grandmother and her granddaughters are playing Mary had a little lamb on a giant xylophone. While upstairs, would-be Hannah Montana’s are belting out songs in a studio (they can choose the backdrop-red carpet perhaps?) and wear whatever costumes they like.
“I’m having as much fun as the kids,” said the xylophone-playing grandma Relda Thomas, frm San Luis Obisbo, CA.

“This isn’t your typical museum,” offers Mike Shomo, who is visiting with his wife and three kids from Denver and was fashioning a sea lion which ultimately would be part of a claymation cartoon that the kids would create right there.

Welcome to Zeum the interactive arts center for kids and teens that is in Yerba Buena Gardens in San Francisco. Zeum is celebrating its 10th anniversary and has evolved along with this area of San Francisco, next to the convention center and now home to the San Francisco Museum of Modern Art, the newly opened Contemporary Jewish Museum, a park with a first-rate playground complete with water and sand play, giant climbing structures and slides. Some kids were practicing their juggling! There are outdoor concerts here. A carousel, bowling and ice skating–all part of an 87 acre urban renewal project south of market street.

If you have time for nothing else in this part of San Francisco, bring your kids to Zeum. It is really like no other children’s museum or art center I’ve ever seen. I wish every city had one. Zeum bills itself as a hand-on multimedia museum for kids but it is so much more than that- Kids can create projects where animation, sound, video production (and for a small donation, take home a CD). Some two million visitors have come here in the last 10 years and also reaches out to the community, including training over 250 teen interns from low income neighborhoods.

“This is my favorite because it’s the only museum I’ve been to where you can make your own movies,” said Siena Starbird, who was with her dad, sister and a friend. “I enjoy it because they enjoy it,” said Scott Starbird, saying the kids are so engaged that he can even read a newspaper in the corner if he chooses.

“No one tells the kids what to do and that’s what they really like,” added Valerie Sobel, visiting with three kids from Oakland.

Nearby, just across the park, is the new Contemporary Jewish Museum where I also stopped in (www.thecjm.org). One of the exhibits had invited artists to interpret the seven days of Genesis. Mierle Laderman Ukeles in turn invited visitors to participate in his art: The idea is that when God made room for us, he shattered a perfect vessel and it is our job to repair the holy vessels, to repair the world It is called Tkkun ha’olum: repairing the world. How will we each repair the world, the artist wanted to know.

Shawn drew a peace sign. Sherry said “To do what I can to comfort mourners.”

Rinat said she would “spread love.”

And four year-old Orion wrote “To help mean people get better,” we could all help do that!