A week in Colorado – stop one “The Springs” 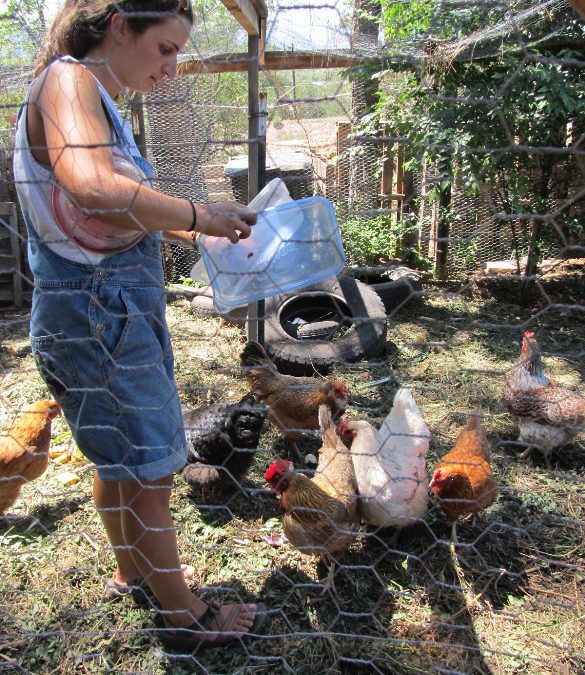 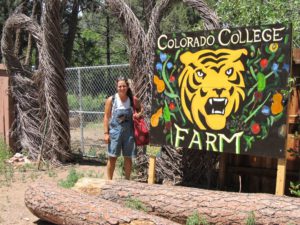 Melanie at the CC Student Farm

DAYONE OF SEVEN — Sometimes, you have to follow your kids’ passions.

That’s why we’re here in Colorado Springs, about to spend the day working on the Colorado College Student Farm, which our daughter Mel, a senior is helping to oversee the summer.

All the way from Denver Airport, she was telling us about the crops, the chickens (“I can’t eat store bought eggs anymore”) and what she’s been cooking with the fruits of the garden.

On our first morning, Mel treats us to a totally organic breakfast of homemade bagels, scrambled eggs from the farm’s chicken coop, various sauteed veggies and some yummy pesto she made from the farm’s herb gardens.

We trooped down to the farm – it was hot, about 95 degrees, but dry so not unbearable.  We spent several hours feeding the watering the chickens, planting spinach and other seeds in three new beds and cooling off in the hammocks under the shade trees.  Mel, who is a senior majoring in Environmental Science, plans to use her experience on the farm this summer as she begins her senior thesis project – which will be helping the Colorado Springs city government expand its community gardens program in the city parks. 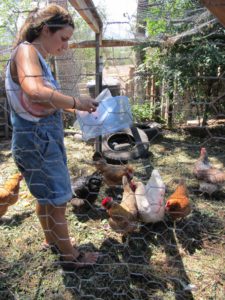 I’m also glad to be in The Springs as locals call it for another reason—to tell everyone that the Waldo Canyon Wildfire that destroyed more than 300 homes earlier this summer has been completely contained and the city and all of its attractions—the “highest zoo in the country,” the Garden of the Gods, the Air Force Academy–is ready and open for business.  “Some people watching TV thought the whole city burned up,” one local told me.  That couldn’t be further from the truth.

In fact, as I write this, I’m sitting in my room with a view of Cheyenne Mountain on a blue sky day from Colorado’s historic Broadmoor Resort. When Spencer Pemrose and his wife Julie opened their resort here in 1918, the idea was to create a place that blended European elegance with Western hospitality.

The resort has been welcoming families, celebrities and world leaders ever since with three championship golf courses, a huge spa, 18 places to eat and drink and get a snack, tennis and tennis camps, and a pool kids love with two mountain water slides, two big tubs and a kids pool.  At sunset, a bagpiper plays on the lake.  This place is huge—744 rooms spread out among 12 buildings on 3000 acres. Weddings are held in the non-denominational Pauline Chapel. It is beautiful. And there is no sign of wildfire anywhere.

A little history: Before the Pemroses made their vision a reality, this land at the base of Cheyenne Mountain was a ranch where corn was grown for making brooms. Willie Wilcox came here in 1880 hoping to cure his tuberculosis and opened a small dairy, but his partner Prussian Count James Pourtales, had another vision—an upscale suburb with amenities including a casino. There are beautiful homes in this area but Pourtales went bankrupt. Penrose, a Philadelphia entrepreneur bought the land in 1916 and the resort opened in 1918.  He built the Pikes Peak Road as an alternative to the Cog Railway and established the Cheyenne Mountain Zoo up the road. He eventually bought and modernized the Pikes Peak Cog Railway

When we arrived last night, we went to Broadmoor’s newest restaurant—the American Bistro with artisanal cocktails (Mel, who is 21, ordered a Rasberry Shrub with syrup made from fresh raspberries, white wine vinegar and sugar with dark rum and ginger ale) and fresh seasonal offerings. We ordered one of the signature dishes—Angry Trout with braised Swiss chard and pine nuts. Yum! So were the profiteroles for desert and the ambiance…. 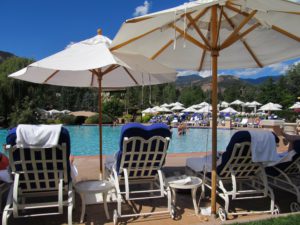 Poolside at the Broadmoor

This morning, families are already walking outside around the lake and heading to the pool. The Broadmoor has announced a $60 million renovation over the next two years including expanding and redesigning bedrooms (there are already villas great for family gatherings) and updates to food outlets and a new activity center kids will love with bowling, billiards, board games and more.