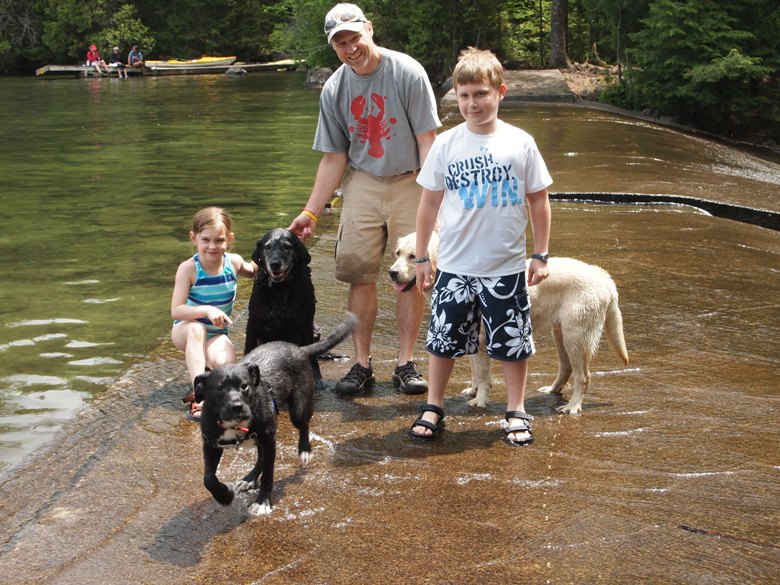 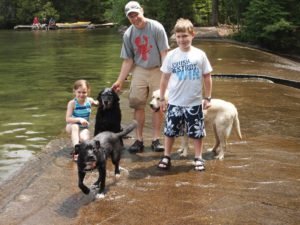 DAY 1 (Saturday May 29) – The water is cold in Mirror Lake in Lake Placid, NY but that’s not keeping the kids—or hardy parents out. The little ones are splashing at the water’s edge while older ones are out in kayaks , rowboats and paddle boats. Our pup is eyeing them all curiously.

“It’s got everything you want with little kids,” said Jim Carroll, vacationing here with his wife and two daughters aged four and nine from Potsdam, NY.

We’re at the lakeside Golden Arrow Lakeside Resort (www.golden-arrow.com) which has been run by the same family for more than 30 years. It is not only pooch-friendly  (10 per cent of revenues from pet fees were donated to the Tri Lakes Humane Society) but the first and only resort in the United State to achieve  five green leaf rating from the Audubon Society for its green initiatives.

There are small touches like the paper shopping bags in each room asking guests to “please help us with our efforts to be more Earth Friendly” by recycling cans and bottles — “Every little bit helps” — to the bamboo flooring, green roof, sand along the lake made from crushed limestone…even small-framed placards placed around the hotel (kids are invited to take a “green quiz” that points out the green features. Did you know the hotel saves 70 per cent of water use with low-flow toilets? Kids get a Mr. Green coloring book, with suggestions on what they can do at home to be more earth friendly (did you know recycling one aluminum can conserves enough energy to run a TV for three hours?), and a special Thanks for Being Green Gift Bag if you arrive by foot, ski, bike or hybrid car. The hotel has been working with NY state officials to create a Green Tourism Council for the state.

“We want kids especially to realize they can help,” says Jenn Holderied, the youngest of the three siblings now overseeing the hotel and the one spearheading the green initiatives. “The things you can do aren’t difficult,” she says. “Our goal is get people thinking about it.”

That extends throughout the 166 room resort—with every variety of room and suite configurations including an allergen free floor and another where pets are welcomed—restaurant Generations where the Holderieds are reaching out to local farmers and purveyors to showcase their crops. They are going to host harvest dinners this summer monthly where farmers will bring in what they’ve cooked that day and challenge the chefs to fashion a dish from cheese or lettuce or vegetables. Eventually, Holdereid says, she hopes families can visit the farms to appreciate where their food comes from.

Her parents, Winfried and Stefanie Holderied, emigrated to the U.S from Germany after World War II and after vacationing here, they felt at home—the region reminded Stefanie of the Black Forest.  They moved to Lake Placid in 1974 and bought what was originally a 36-room hotel. During the 1980 Olympics, they not only hosted television crews from ABC Sports but took the Austrian ski team into their home.

Over the years, they continued to expand as their children came into the business. Heidi is the general manager, Peter oversees building and Jenn heads up marketing and the green initiatives. The next generation is getting involved too.

Lake Placid, home to the 1932 and 1980 Olympic Games, is a terrific place for an old-fashioned vacation. “Whatever the season there is something for the kids to do,” says Suzanne Boger, an attorney from Saratoga Springs, NY who comes here often—winter and summer—with her two kids , husband and two dogs. We met them hiking and splashing in Lake Placid along the Peninsula Trails that run for miles; in winter the kids love to ski and go on dog sled rides, she reports.  “Lake Placid is very kid friendly—and dog friendly,” she says. We learn that first hand as people stop to pet our Trooper and storekeepers offer her treats.

There is terrific hiking here, of course—we are in the middle of the Adirondack Mountains. But there is also kayaking, canoeing and fishing, mountain biking. The Whiteface Downhill Mountain Bike Park features 27 downhill and cross country mountain bike trails that run between the ski trails, through streams and woods.

There are many hiking options here—six million acres in Adirondack Park, the largest protected area in the contiguous US and greater than Yellowstone, Everglades, Glacier an Grand Canyon national parks combined–whether you have young kids, a young puppy like we do or  are training for a marathon. We first opt for the Peninsula Nature Trails that hug Lake Placid and where our pooch find two other playmates, splashing in the water and chasing sticks.

There’s also John Brown’s Farm, the historic farm and grounds of the famed abolitionist as well as some farms in the area.

“Even when the weather is bad, there is something to do with the kids-bowling, movies,” says Suzanne Boger.  “It is an old fashioned vacation.”

That’s obvious as we stroll up Main Street, lined with shops, coffee houses, even a band shell where families are picnicking and relaxing. There is every kind of restaurant too from the Golden Arrow’s Generations (we had first rate trout and schnitzel) to Mexican food, burgers, a local Lake Placid Brewery, a creperie, homemade Adirondack chocolates, Brown Dog Wine Bar, and the Boat House Restaurant where you can arrive by boat for a gourmet meal.

“It may be touristy,” said Suzanne Boger. But she gestures across the spectacular Lake, with Whiteface Mountain in the distance, people kayaking. “There are plenty of places to get away from the crowds.”