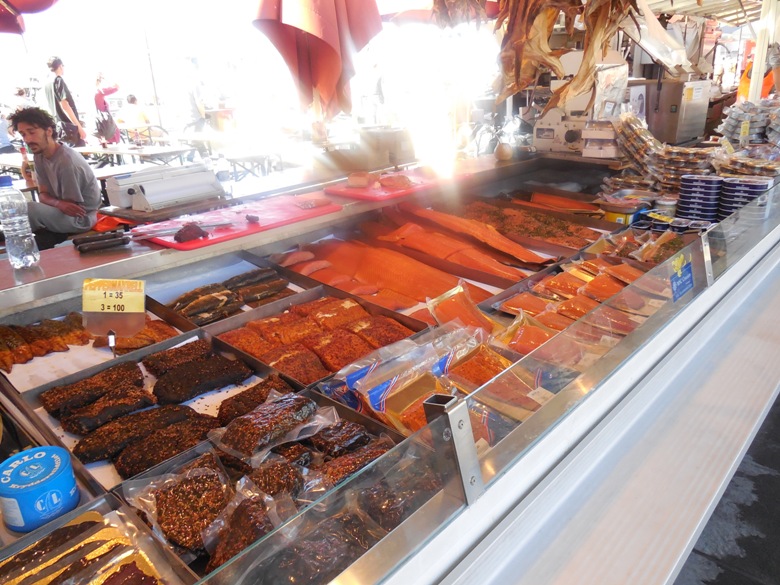 My favorite way to combat jet lag:  A good walk and some good eats.

OK, maybe whale isn’t to everyone’s taste but you can’t get better fish than in Norway—especially salmon served smoked, marinated or simply broiled.

I couldn’t have asked for better after arriving in Bergen, Norway this morning to join a new Adventures by Disney tour of this beautiful but sparsely populated country. (There are only a little more than five million people in this entire country!  Less than 300,000 live in Bergen and it’s the second largest city in the country.) 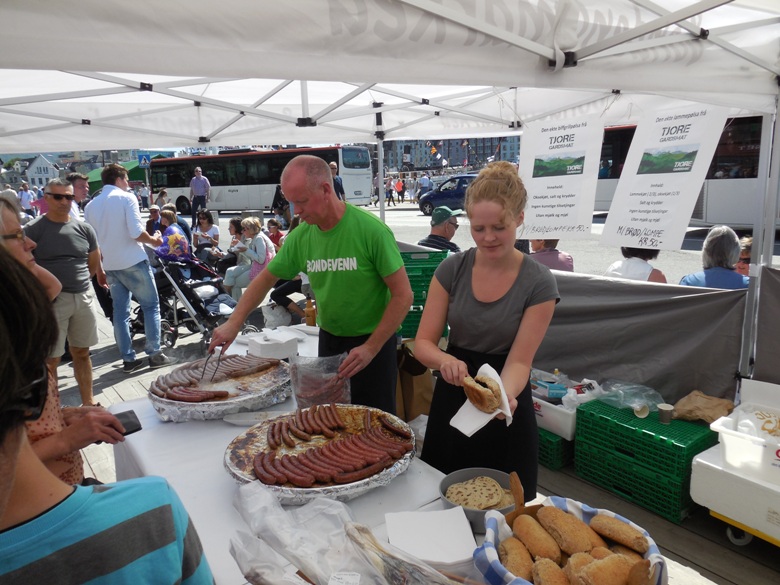 Goat sausage at the market in Bergen Norway

We flew Norwegian which has just started flying Dreamliner 787s nonstop from New York here and boasts deeply discounted flights to and from Los Angeles, New York, Fort Lauderdale, San Francisco and Orlando  to Norway,  London and elsewhere in Scandinavia.  With starting fares at  under $250 one way, you might be able to snare a  premium economy seat for the same or less than a regular economy seat on other international airlines—and fly nonstop, as we did.

We knew our time in Bergen, considered the gateway to Norway’s famous fjords, was brief so we tried to make the most of it.  And since this Adventures by Disney trip was “inspired” by the hit film Frozen, I have to mention that Bergen, with its historic wood houses painted in a rainbow of colors and its wharf are reminiscent of Arendelle, the fictitious Norwegian kingdom that is home to the film’s stars, Queen Elsa and Princess Anna.

Smoked fish at the market in Bergen

First up for us:  the famous Fish Market along the wharf  and just a few steps from the Radisson Blu Royal Hotel, where the Adventures by Disney group was spending the night adjacent to the city’s famous UNESCO’s World Heritage wooden buildings.

The market was crowded with locals on a Saturday.   We started with a lamb sausage dished up on a flat potato cake, followed by a beer at one of the many outdoor cafes along the wharf.  A plus for Americans, everyone here speaks some English.  A minus:  Norway is a very expensive country to visit.  (All the more reason to opt for an organized tour, like Adventures by Disney, with most meals and activities included, or a cruise.) 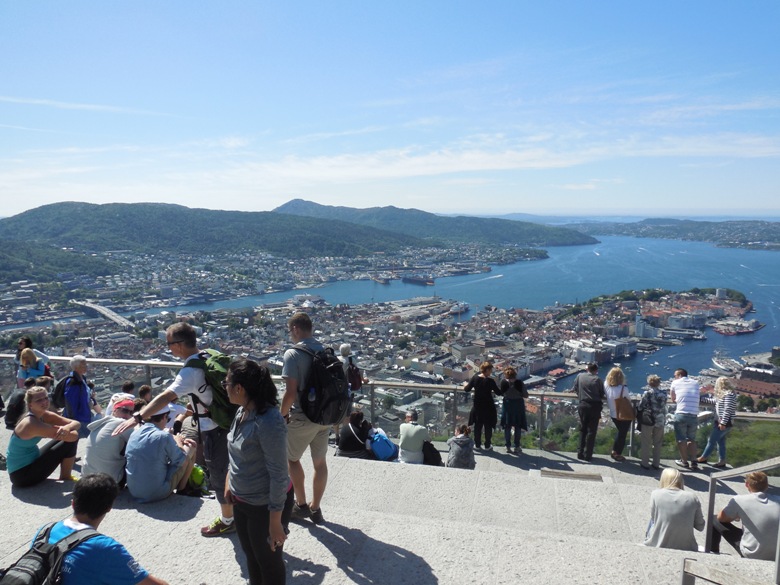 View from top of the funicular in Bergan

We made our way to Bergen’s top tourist attraction—the Floibanen funicular up to the top of the Floyen mountain in just about seven minutes.—the city is surrounded by seven mountains. The views are amazing and there are plenty of marked trails.  We walked back down to the city center—about an hour, past pretty houses perched on the hills.

Bergen is one of the best known cities dating back to the Middle Ages. Today it’s fun to wander through the old narrow alleyways where there are small shops and galleries tucked away. Can you fit some reindeer antlers in your duffel? 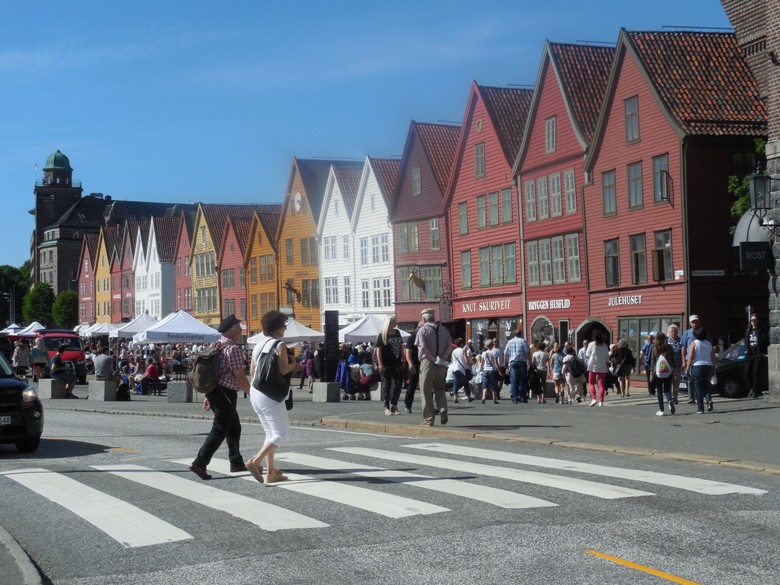 I wish we had time to explore some of Bergen’s museums. The Hanseatic Museum is housed in one of the oldest wooden buildings in Bergen, in fact, and depicts the life of a Hanseatic Merchant during the period of 1360-1754 when they dominated trading. There’s even a Leprosy Museum housed what was once a hospital for Lepers and focuses on Norway’s commitment to combatting the terrible disease.

(I found Lonely Planet’s Norway book very useful  and shared with others on the trip.)

Since we’re jetlagged, we decide rather than museums to stroll the open-air markets selling everything from wool hats and sweaters to plush reindeer to honey, jams, reindeer sausage and all varieties of delicious looking fish. The Fish market is open daily from morning till night and this is where locals come to buy their fish—king crab and lobster still swimming in a tank, glistening snapper and monkfish,  oysters, mussels  and all varieties of salmon. At Fjellskial, we taste smoked eel and smoked cod; salmon smoked and salmon marinated in cognac, caviar.

The friendly saleswoman, Tamara Bino is happy to let us sample anything we like.  There are stalls selling fish soup and sautéed mussels, fish kabobs and fish cakes.