A whirlwind tour of Hong Kong over the holidays 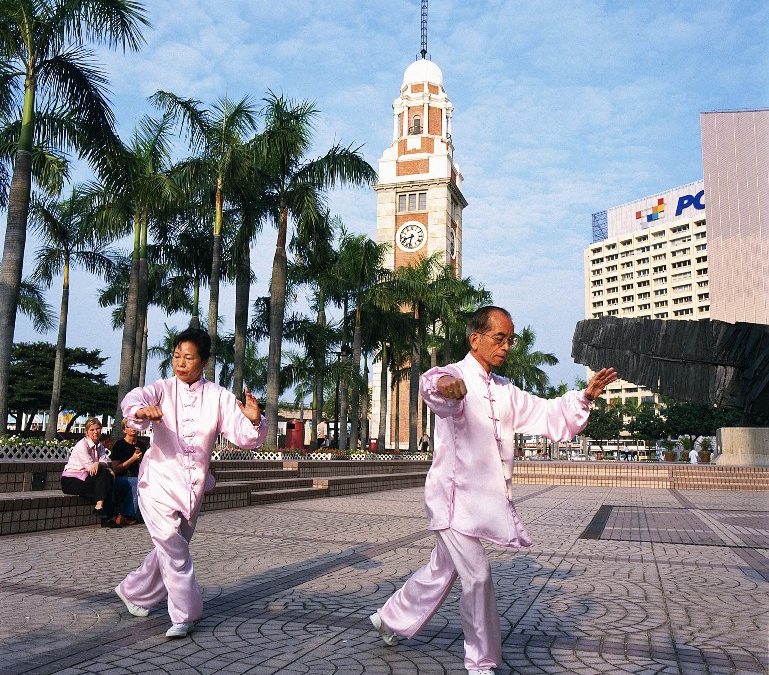 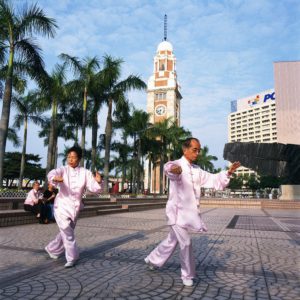 The ancient art of Tai Chi or shadow boxing

All I’m supposed to do is “take a step forward and look at the sky.”

But it’s not as easy as it sounds.

I can’t believe I’m here. Hong Kong’s famous Victoria Harbor watches as I try to follow William Ng, a 75-year-old Tai Chi master, as he introduces about 20 of us to the ancient art of Tai Chi or “shadow boxing,” a Chinese martial art developed centuries ago to help balance the yin and yang. The ancient Chinese practice is a popular means of keeping fit in Hong Kong, as it is in the United States, especially among older people, though there are many twentysomethings in our group.

“It is physical exercise and it is art,” Ng, a retired teacher, tells us, as his wife helps demonstrate the techniques. “It is good exercise for all ages,” he says. “When I was (a) child, my parents told me I was so small I needed more exercise so I practiced kung fu and Tai Chi. Kung Fu is fast and Tai Chi s slow and smooth.”

We all try to follow as Ng leads. We’re told to turn our right foot forward, our fingers upward; move our left foot forward. We’re urged to carry on as Ng demonstrates the slow movements, his shoes sporting yin yang symbols on their tops. So many older people practice Tai Chi, says Ng, because it is good mental, as well as physical, exercise. You have to remember the patterns of the many movements with names like Grasping a Bird, White Crane Flapping Its Wings, Needle at Sea Bottom and Single Whip.

Ng typically charges about $90 USD for a Tai Chi class but this one is free — courtesy of the Hong Kong Tourist Board. It’s offered three mornings a week outside the Hong Kong Museum of Art.

The class is part of a Meet the People program that enables visitors like me to meet locals like Ng. There are also free sessions in feng shui, the ancient Chinese practice of placing objects and buildings in harmony with nature to ensure good fortune. There’s also a class on the proper appreciation of Chinese tea. (I opt instead to visit a young Harvard MBA who has moved back to Hong Kong to start Leaf Tea Boutique, a new-style tea shop that offers unique teas from around the world.)

I’m here because like a growing number of parents of college-age children studying abroad, I’ve taken the opportunity of my daughter Melanie’s semester in Asia to broaden my horizons too. The afternoon after my Tai Chi class, Mel arrives for a whirlwind visit to Hong Kong during which we try to cram as much shopping, eating and touring into our days and nights as we can before heading home.

I wonder if Tai Chi will help my jet lag. Tai Chi, Ng told us after the class, is good remedial exercise for whatever ails you. “It is about balance and controlling our internal organs. It will make you feel peaceful,” he says.

But I feel anything but peaceful in Hong Kong, home to 7 million people crowded into a space less than half the size of Rhode Island. According to “Frommer’s Hong Kong,” the city is in one of the most densely populated areas of the world. (I used Frommer’s and “Lonely Planet’s Hong Kong” and “Macau City Guide” in an effort to understand this place that many call the Gateway to Asia. I found it to be a land of confounding contradiction.)

I’m practicing Tai Chi, which Master Ng calls, “a slow-motion exercise. The slower the better,” but staying at the busy, oh-so-hip 492-room Mira Hotel, which has won awards for its modern design and boasts everything from signature sake cocktails to artisan chocolates in the gargantuan lobby. My daughter loves the place — especially the free WiFi and bountiful breakfast buffet that includes dim sum, as well as omelets made to order.

That’s the thing about Hong Kong — it is such a melding of East and West. We’re typically the only Westerners in the crowd but everyone here can speak English, the result, of course, of 156 years of British rule, which only ended in 1997 when Hong Kong was handed back to China. Today, millions of Chinese tourists flock here to shop and eat. (That number is certain to increase when Hong Kong throws its biggest party of the year to celebrate Chinese New Year, which begins Jan. 23.)

You’ll find the tallest hotel in the world here — the Ritz-Carlton Hong Kong — which has just been open for a year. There’s also the tallest Buddha in the world at the Po Lin Monastery where 100 monks live in seclusion on the island of Lantau. Locals come to see the monastery but tourists come by cable car to see the Buddha and the tourist village just outside. The cable car has become a top tourist attraction here.

There are glitzy designer stores everywhere, as well as the tiny stalls at Ladies Market — a veritable moveable shopping mall that is packed up every night — where you can find knock-offs of every variety of designer item.

One evening, we lay back on lounges on a traditional Chinese junk sipping ginger tea and looking out at all of the lights of the skyscrapers in Hong Kong’s harbor. Originally owned by Chinese fishermen, these picturesque, red-sailed junks used to crisscross Hong Kong’s waters for hundreds of years. Now, the few that are left are tourist attractions. Still, we try to imagine what Hong Kong was like in those days.

Next, we head to the Gateway Arcade, a giant shopping mall, for dinner at a Vietnamese restaurant, Rice Paper, that couldn’t be more modern.

In-between the sites and the shopping, Mel and I begin to catch up. I loved hearing about her adventures. She’s been on the other side of the world for more than four months, the longest we’ve gone without seeing each other. (Thank goodness for Skype!) I’m glad for these few days of just mom-and-daughter time and the opportunity to experience Hong Kong together — a true adventure.

“Close your eyes,” Ng said in Tai Chi class, “And all of your troubles and decisions are far away from here.”

(For more on Eileen’s adventure in Hong Kong, read her travel diaries)