A whirlwind trip to the parks and great memories 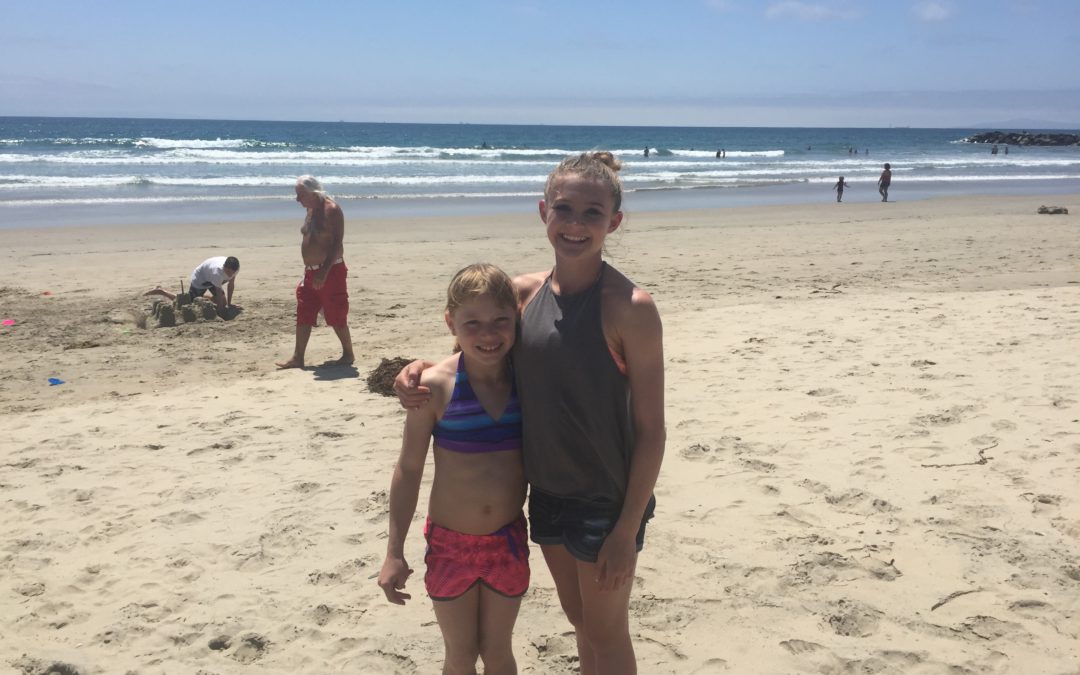 We slept in today and didn’t even eat breakfast until about 1:00!  My dad lets me pick places to eat by using Yelp!  I found this yummy place in Newport by the beach called My Galley and they had the best breakfast burrito!  We met up with my friend from Colorado, Kaylie and her family and hung out at the beach all day doing cartwheels, handstands and building a sand castle.  It was good to relax and chill a little bit (and not stand in a line!) and since it was a Tuesday, the beach wasn’t crowded at all.

Minion Mayhem here I come!  I couldn’t wait another day to go see the Minions from the Despicable Me movies.  I love them and wanted so bad to go on the ride.  We got to the park early enough to be the first few through the gate when it opened.  We had Front of Line passes which are really cool – it gets you to the front on each ride once.  We also had reserved seating at the shows like WaterWorld (a really cool action-packed stunt show with people on motorboats and JetSki’s. So the pass saves a lot of time and get’s you good seats!

First stop was Despicable Me Minion Mayhem.  We were the first group to ride that day and I didn’t know what to expect.  The part before the ride where Gru introduces the ride (watch out for the fart gun! J ) is really cute and fun.  I love that Gru’s daughters give us the tour on the ride.  We are basically going to be turned into Minions!  We went in and sat down in our little car and the ride began.  It’s a 3D ride that is a fun adventure.  I loved the ride (although I thought it was going to be more of a roller-coaster type ride) and wanted to go again, but first it was time for some different rides.

Since it was early, we headed down to the Lower Lot to check out the rides down there and also get my dad some coffee!  He loves his morning coffee!  There is a Starbucks down there and there wasn’t anyone in line, so I got my hot chocolate and a little bite to eat.  We stored our stuff in these free lockers (its free for 90 minutes my dad said). I decided that our first ride would be Transformers 3D.  Now this ride was fun, and loud!  It tossed me around and it made me feel like I was in the movie!  Really, really fun.  We then went to the Revenge of the Mummy ride.  The line was really short early in the morning so we got right on (we didn’t use our front of the line pass!). I love this ride too.  It’s really, really fun, and really thrilling. I can’t believe how much fun I had on this ride. I thought I’d be scared, but right after we were done going on it the first time, I wanted to ride it again. Since we were down in the lower lot at Universal, and since it was getting hotter, I convinced my dad (we didn’t bring our ponchos this time) to go on the Jurassic Park ride.  I had never been on this ride and I liked it because of the scary dinosaurs.  At the end of the ride you go down a big hill that’s really fun. Be careful as you’re waiting to get off the boat, because these little pesky dinosaurs will try to squirt water on you when you aren’t looking.

We went back up the long escalators to check out Springfield USA and go on the Simpsons ride, which is also a motion simulator. You are in Krusty’s new ride–which is also the ride that Homer, Bart, Marge, and Lisa are on. Maggie and grandpa were left outside of the new ride. Sideshow Bob (see if you can find him outside in Springfield) had escaped from Springfield jail and is out to kill the Simpsons. He takes over the ride and then switches a button from Thirilling to Killing and try’s to hurt you. You are always right behind the Simpsons. Homer is even funnier than ever.  Also once you are done with the ride you can enjoy a Krusty’s hamburger, or even grab a donut from Lard Lad Donuts (get these early because the day we were there, they sold out!).

Even though it was raining a little bit on the day we were there, it was exiting when we went on the famous Studio Tour.  I really didn’t know what to expect, but my dad said that we would get a behind the scenes tour of how they make movies and shows.  We went right by the studio where they make one of my favorite shows “The Voice.”  We saw into some stages that are used in a Universal movies and TV shows. We also saw some amazing props like the cars from Fast and Furious, The Flintstones, and even some cars from Jurassic Park.

There was this really fun part where we were in the jungle and King Kong helped to save us from these mean dinosaurs.  I was also kind of creeped out when I saw a guy named Norman from the movie Psycho. He started coming at us with a knife!  I also jumped a little bit when this gas can exploded in the Jaws set.  The subway part with the earthquake was fun and amazing too. The ride takes about an hour, so make sure that you plan for that.  Oh, and make sure that you get an outside seat on the tram so that you have a really good view of everything.

I wish that we had seen their all-new grand finale, called Fast & Furious–Supercharged!  But it doesn’t open until the end of June in 2015.

We decided to go to take a break and eat, so we headed back up by the Minions and ate at Gru’s Lab Café.  I had a really good grilled cheese with pulled pork – it was yummy and gave me some energy to go on the Minion Mayhem ride again before heading to see the Animal Actors show and the Special Effects Stage show.  After both of these shows, since we had our Front of Line Gate A passes, we were treated to some more information on how the shows work and got to pet the animals and see them up close.  It as spectacular to see this huge owl so close.  My brother, who hates birds, would have been freaked out!

We also went over to the show Waterworld where we sat in the seats that said “Soak Zone.”  Boy, did we get wet.  The guy picked me to pump up the crowd and I got to shoot water on people with this big ol’ soaker gun.  It was so much fun!  The show itself was really entertaining and exciting.  A lot of cool movie stunts and we were right in front where the plane blows up. We get soaked again! Very thrilling!

As our day was winding down, my day promised me a trip to the gift shop.  From the time that I had seen the fluffy stuffed unicorn at the Minion Mayhem ride, I knew that’s what I wanted.  My dad let me pick one out, plus some other stuff for my family.  I love my unicorn and have named it Andy.

Universal Studios is known for its studio tours and I learned a lot about how you make movies – like green screens and how they use little model buildings.  I went on all of the rides a few times which was exiting, and I really liked all of the shows.

Thanks Universal for a great time hanging out with my dad. I hope to come back soon when the new Harry Potter World opens up in 2016 and explore the Hogwarts castle (it looks really neat – the buildings were being built when we were there) and also getting to see the Fast and the Furious ending to the studio tour.  I can’t wait!

Because I was finally big enough to ride almost all of the rollercoasters.  They have a bunch of them, and today was going to be a day of thrilling rollercoasters.

My dad and I first went on GhostRider which is this big wooden rollercoaster that goes really fast and shakes you around.  It is a blast.  I met up with Kaylie and we began riding all of the other rollercoasters there – from Boomerang to Supreme Scream.  They are all really fun and we tried almost all of them.

Kaylie’s brother, Trenten, doesn’t like the rollercoasters, but he really likes the log ride, so we went on that a bunch of times too.  We all got soaked when we went on Bigfoot Rapids.  I had my poncho so it wasn’t too bad and my dad had brought my flip-flops to wear for this ride.  Thanks dad!

We ate some of the best fried chicken I’ve ever had at Mrs. Knott’s Chicken Dinner Restaurant.  It was so, so good.  I ate 3 pieces!  I had a lot of fun at Knott’s Berry Farm today.  It was good to ride a bunch of rollercoasters and be with my friend.

As I wake up today, my daddy is packing our suitcases and I am sad because it is our last day on our daddy/daughter vacation.  We have to get on a plane and go home, but first, we’re headed to Downtown Disney for some shopping and my dad has promised to take me to a movie at the IMAX theatre there.  We see Disney’s Tomorrowland, which was pretty good.  I love the big, huge IMAX screen.

After the movie we shopped at Anna & Elsa’s Boutique where I got some stuff from the movie Frozen. And then we went to get some t-shirts for my family at the

World of Disney® Store where they have just about everything you can think of from Disney.

We packed our gifts in our car and headed to the airport and back to Colorado.  I had such a great time with my dad and will always remember this trip with him.