Aboard the Megaship Norwegian Epic 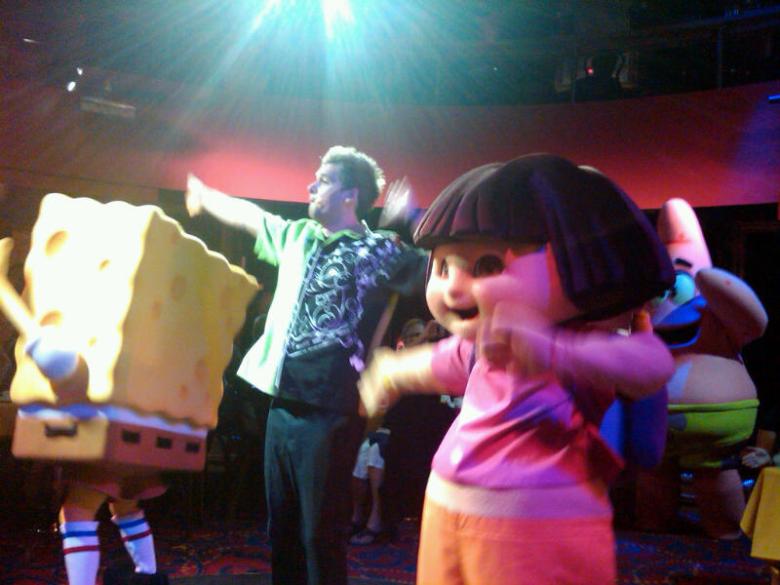 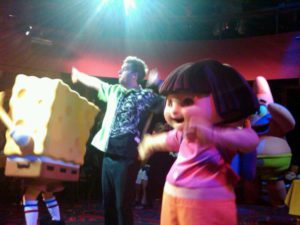 The kids — and some grown-ups too — are lined up on the ship’s deck, hands in the air, vying for the chance — to have green slime poured all over them.

SPLAT! The water balloons pop on cue. The music is loud and energetic, with Nickelodeon dancers dressed in orange and green — down to their plastic orange-and-green Crocs — spurring on the crowd, some of whom came dripping wet from the waterslides, including the Epic Plunge, the biggest waterslide at sea, just for the chance. (Can you repeat a tongue twister in five seconds? How many whipped cream pies can you plaster to a grown-up’s posterior?)

Welcome aboard the brand-new Epic (www.epic.ncl.com ), the latest megaship to debut for Norwegian Cruise Lines. At 153,000 tons, the new ship can accommodate 4,100 passengers, including upwards of 1,000 children, and 1,700 crewmembers and is scheduled to sail to the Caribbean from Miami (snare $99 flights, including port transfers, from 16 gateway cities. Book by Aug. 1 for cabin upgrades fleet wide and get up to $150 onboard credits for Epic reservations.)

Epic is all about entertaining you (everything from the Blue Man Group to Second City to every variety of specialty restaurants) and that, of course, starts with the littlest cruisers, from the unique partnership that delivers Nickelodeon at Sea (ready for your photo with SpongeBob?) to the 7,000-square-foot Recess kids area — double the size on other NCL ships — that offers organized programming for kids as young as two. And soon NCL will begin Nickelodeon-themed shore excursions are being planned, says Richard Ambrose, who oversees youth programming for the fleet.

Let’s not forget the oh-so-hip teen club Entourage, purposefully located two decks away from the younger kids’ facilities, which offers its own burger grill right outside. Richard Ambrose notes that great effort was made to find just the right teen counselors for Entourage. Besides passing the extensive background checks, counselors have to have CPR training and education and recreation experience and must pass muster as being hip and appropriately laidback enough to get finicky teens to come hang out in the expansive teen club rather than in the stairwells.

“The family market is huge and when you build the family market, you are building for the future,” explains Richard Kilman, who oversees entertainment for Norwegian Cruise Line. Kilman himself is the father of two and the expectant dad of twin daughters. “When these kids grow up,” he said, “we want them to come with their families.”

As cruise ships get larger — Royal Caribbean’s 5,400-passenger Oasis (www.royalcarribean.com ), Carnival’s 3,646-passenger Dream (www.carnival.com ), Oasis’ sister ship Allure slated for December and Disney’s Dream next January — we’re seeing more for families at every turn. Allure for example, will introduce DreamWorks Experience complete with a “How to Train Your Dragon” ice show and Disney’s Dream promises Mickey and pals may peek in through virtual portholes and kids can strut their stuff in the Monster Academy. Carnival’s Dream, the largest ship in its fleet, boasts 19,000 square feet of dedicated space for kids and teens.

NCL has redesigned cabins aboard the Epic with families in mind. There are separate toilet and shower areas, family cabins located near kids’ activities and the largest villa complex at sea, which includes two-bedroom, two-bath family suites with access to a private sundeck and pool, gym, restaurant and more. NCL notes that these pricy suites typically book first — ideal, I thought, for a well-heeled multigenerational family that wants all the bells and whistles (the water slides, the kids programs, the entertainment and restaurants) but wants to avoid the fracas and lines inevitable on such large ships.

I got a chance to see what families will be in for on a mini-cruise out of New York Harbor on July Fourth weekend. I started the morning with pancakes (with green syrup) while SpongeBob, Patrick Star, Dora the Explorer and other favorite Nick characters entertained me and the roomful of kids and parents.

The good news: Kids and teens shouldn’t whine they are bored. Besides the organized morning-till-night youth programming (until past midnight for teens) there’s the AquaPark, including a shaded water play area for the youngest kids, batting cages, basketball, soccer and more on the sports deck, as well as climbing walls, bowling and ice-skating.

There’s also a new emphasis on activities the family can do together — T-shirt painting, pizza-making and Nickelodeon-themed games. Even the biggest spa at sea is catering to the family crowd with Mother/Daughter Paradise Massages or Father/Son Chill Out Massage ($195), as well as an array of other teen and kid treatments. (Fabulously Fruity Facial maybe?)

The ship’s entertainment is designed so that parents can be comfortable taking kids to an early performance of the Blue Man Group, Second City or “Howling at the Moon,” which features “dueling pianos belting out rock ‘n’ roll. All were excellent, but I admit the ship’s new Cirque Dreams dinner theater left me wishing there were more acrobatics (terrific) and less “shtick” (terrible).

There are nine specialty restaurants onboard offering everything from Chinese noodle dishes to Italian to steaks. (Required cover charges are halved for kids 12 and under.) Even your most finicky eaters won’t go hungry. Did I mention there are 11 other dining options, including $5 pizza that can be delivered to you anywhere on the ship?

Be forewarned that while you may never have had so many on board dining or entertainment options, you won’t be able to just waltz up to the French Bistro, Shanghai’s or the Nickelodeon breakfast and get a table, as Norwegian’s “Freestyle Cruising” ads might suggest, not with 4,000 cruisers on board. To avoid disappointment, and aggravation, book your shows and dinner reservations before your cruise, just as you can for shore excursions.

Then all you have to do is kick back and enjoy everything the big ship has to offer — once you figure out your way around.