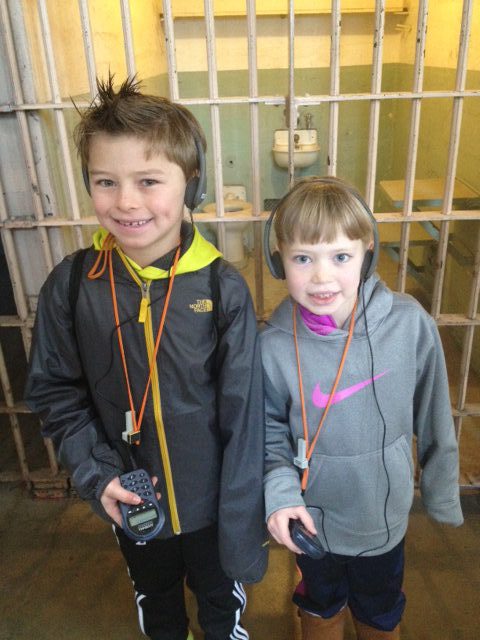 As it is each year, when we began planning our yearly holiday family vacation, we wanted to make sure that we not only had fun, but also that we include some education for the kids.  This year was no different as we were deciding between the usual warm weather destinations, but when we mentioned San Francisco to our kids Ethan (10) and Hannah (8) they both immediately were excited because it has so much to offer, and mostly, for the chance to go and visit Alcatraz Island.

Along with Alcatraz, San Francisco has a lot of kid-friendly venues including the Exploratorium, Chinatown, Fisherman’s Wharf, and of course the Golden Gate bridge to name a few.   But, undoubtedly the kids pre-trip focus was all about getting out to “The Rock” and learn about its rich history, past inmates, and learn more about the attempted escapes.

Booking your trip to Alcatraz early is key—especially around major holidays.  The tickets sell out often and early, so don’t wait until you get out to San Francisco to book your Alcatraz experience.  We saw a few families who showed up expecting tickets to be available, only to be disappointed when told that the tours were sold out for many days in advance.

After spending some time in the boarding area and grabbing a quick bagel and drinks in the handy café, we boarded our boat and headed over to visit Alcatraz.  As we approached The Rock, the kids were beaming with anticipation and excitement.  They started wondering if the prisoners could really escape and if they could swim the seemingly short distance back over to San Francisco.  They were also nervous and Hannah asked if there were still prisoners living on the island.  We unloaded and headed up the hill to the main prison block to begin the audio tour.

Alcatraz offers everyone their award-winning Cellhouse Audio Tour where the men who were actual guards and inmates bring the tour to life.  The tour is captivating and adds depth to the experience which the kids really appreciated, and made them feel as if the inmates and guards were there in person giving them the tour.  The kids were hesitant to enter into the prisoner cells, especially solitary confinement, thinking that the cell doors would close, leaving them there forever!

After we completed the tour, we took some time to walk around and explore on our own.  Being an avid baseball player, Ethan imitated hitting a home-run on the baseball diamond out on the Yard where the inmates were allowed a couple of hours each week to enjoy the outdoors.  We took in the beautiful views of the city from the island and decided it was time to pick up a few gifts prior to leaving.

We arrived back at Pier 9 and began the rest of our day, post The Rock. Ethan and Hannah both exclaimed that it was “awesome” but they wanted to make sure that we didn’t run into any of the escapees for the rest of our stay in San Francisco.

(Mike is the top dog at O2 Group, which is TakingTheKids’ website provider and partner)