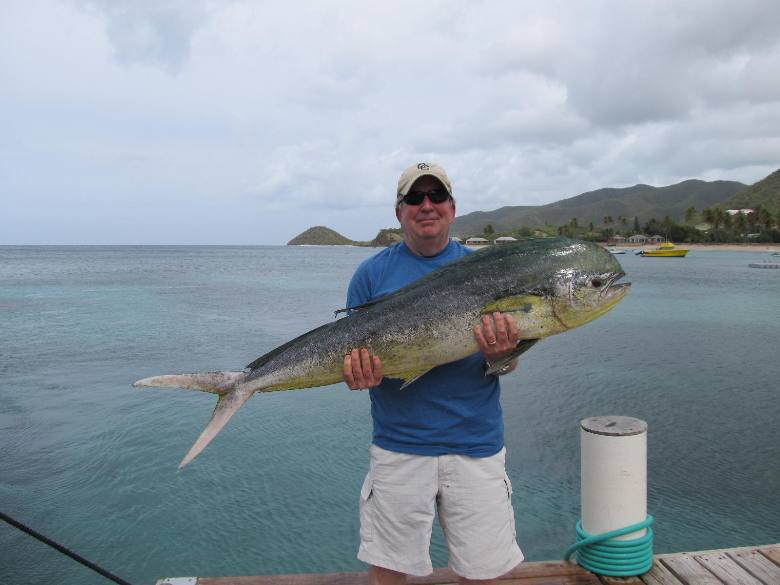 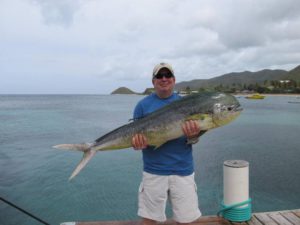 In my experience, going fishing in the Caribbean is always a speculative enterprise.  Then again most fishing is.

I’ve been out on charter boats many times and come back frustrated at not a single nibble.  Thirty years ago, when I went out on a deep sea boat from the Curtain Bluff resort on Antigua on our honeymoon, I got excited when my fishing pole jerked with a jolt and my line went screaming out.  It turned out to be snagged on a garbage bag.  I came back empty handed.

A few years ago on a sailing trip in Tahiti, our charter captain put out a trolling line every day for a week as we sailed from island to island.  Nothing bit — until the last day when we caught a 20-pound Mahi Mahi, and that was thrilling.  Even better was sharing it for dinner that night, our last with the captain (there were plenty of leftovers to send home with him).  Last summer in Alaska I went salmon fishing for the first time.  And just a few months ago I got to try out bonefishing in the Bahamas, which was a thrill.  Still the big creature from the deep sea has always eluded me.

Today we’re back at Curtain Bluff and I’ve decided to take the 6:30 a.m. deep sea fishing charter.  The best thing about Curtain Bluff, other than the beauty and just about every other thing, is that it is all-inclusive, so the fishing (along with Scuba, snorkeling, water-skiing and other activities) is part of the price.

I’m the only guest on the early charter.  I head out with Robert and James, two staff crew members who I have a difficult time understanding as we get out into the swelling seas hunting for, you guessed it, Mahi Mahi (or possibly barracuda).

It didn’t take long for some serious action.  About 30 minutes out James excitedly rounds the boat to a spot where a bunch of birds – seagulls and frigates – are noisily fighting over what’s probably a school of bait fish.

Bam-wham!  One of our four lines takes a hit.  Seconds later a second line goes screaming out.  Robert hands me the first pole and I start to pump and crank but whatever I have on the other end is really making progress difficult.  Suddenly it jumps out of the water about 100 yards behind the boat – WOW!  I thought for a minute it might be a marlin, but James says Mahi Mahi.  A beauty.  And a huge one.

Then the other fish jumps, almost as big and also a Mahi.

I’m fighting to bring in my catch for nearly 10 minutes, my arms aching and hands cramping from the struggle.  And just as I get the monster up near the back of the boat that old fisherman’s curse strikes – my line snaps.  What a let-down.   A few curse words pass my lips.

But just a few as I suddenly realize there’s that second fish still in the water.  James has him near the boat and Robert pulls him in with the gaffe.   We also congratulate ourselves on a fine catch, even though one got away.

We look it over. James says it’s probably 25 pounds – “but the one you had was even bigger.”   That made me laugh.

The rest of the morning was a shutout, but after that I wasn’t disappointed in the least.

When we got back to the dock I got my picture, and the excellent chef at Curtain Bluff served us grilled Mahi Mahi with capers, dill and roasted veggies for dinner that night.  The guest will be sharing that fish for a couple more nights I expect.

PS:  Mahi Mahi is considered a “best choice” catch when done by rod and reel as opposed to commercial long line in the Atlantic — which is where we were — according to the Monterey Bay Aquarium’s great Seafood Watch website. And, although classified as a “dolphinfish,” Mahi’s are not related to the more commonly called Dolphins, which are marine mammals, not fish.