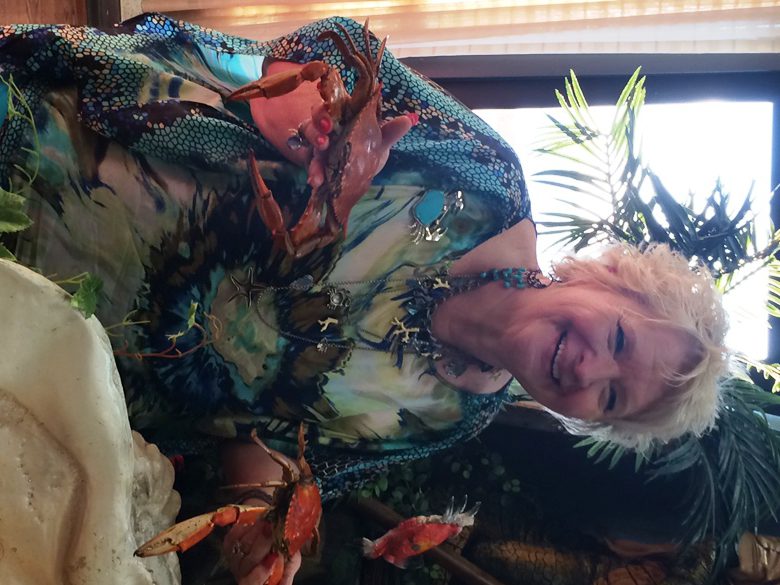 Then you are in for a treat. “The sweetest most succulent shell fish that you have ever eaten—more tender than lobster,” promises longtime Lake Charles, LA caterer Marilyn Dawdy as she teaches me how to dig into a crab that’s been cooked in a traditional Louisiana Fish Boil with shrimp, potatoes and corn.

I’m at a Fais-Do-Do, A Cajun Dance party, at Travel Media Showcase and Dawdy, I learn, mid-lesson, is catering the big event for the conference in the Lake Charles Civic Center overlooking Lake Charles.

Dawdy, a trained pharmacist and a grandmother, has been a caterer for the last three decades. She’s dressed in bright blue with a blue crab pin on her blouse. “What I like to say in Louisiana is that we are teaching our children and grandchildren to live off the land and conserve natural resources.”

“When you go out on the water,” as Dowdy does to go crabbing with her family, “you are giving a tremendous gift to the children.”

She shows me how to crack the back, and then crack each piece in sections and then to crack the legs. “It’s messy, but worth it,” she promises. “Anything worthwhile takes time.”

Crab is not eaten quickly. A fish boil is an event—families gather and drink beer while the crab boils. Everything is set out on newspaper.

Louisianans don’t need much of a reason to gather for a fish boil, explains Katie Guasco, who works for the city of Baton Rouge, not far from here, and was handing out packets of the Louisiana spices at the Travel Media Showcase conference. They’re routinely put in the water at a Fish Boil, she said, along with the shrimp, crab, crawfish, onion, lemon, corn, potatoes mushrooms and even sausage.

The longer everything sits in the big pot, she explained the spicier it gets, “So that’s why we feed the kids early!”

In Louisiana, there are fish boils for every season — crawfish and shrimp in summer, crab in late summer and oyster in fall up until the holidays. “We don’t need much excuse to have one,” Guasco said — Mother’s Day, a birthday, a football game….

Louisiana, of course, is famous for its food—Creole, which tends to be more tomato based seafood, and Cajun, which tends to have more meats like chicken, homemade sausage that is cooked “Lower and Slower,” explained Kelli West, who works for Alexandria Pineville LA Convention and Visitors Bureau. (There’s an October pie festival in the tiny town of Lecompte which draws thousands every fall, she tells me).

Maybe you want to try alligator in a sauce Piquant which tastes like chicken, locals say. 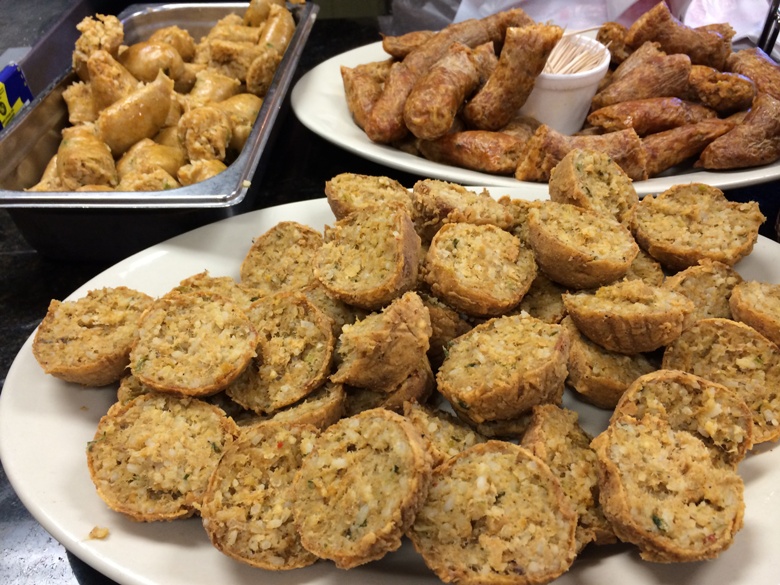 How about Boudin (pronounced boo-dan)? I’m smack in the middle of Boudin country.   There’s even A Boudin Trail through Southwest Louisiana that includes Lake Charles, Sulphur, Vinton, Iowa, Westlake and Cameron Parish. It takes you to mom and pop grocery stores and gas stations along Interstate 10 and Highway 90.

What is Boudin? Locals explain it is a spicy hybrid of pork or beef, similar to sausage, made with varying amounts of meat, liver, rice, onions, parsley and of course pepper. “We eat it for breakfast, lunch or dinner,” one local said.

Everyone has a different recipe—it can be made with crawfish tails, alligator, extra spicy or with smoked sausage.  This being Louisiana, there are fried Boudin balls too. We sample several kinds at LeBleu’s Landing, a meat market and restaurant in Sulphur, LA, and watch as it’s made – 4,000 pounds every other day. Do I like it? Let’s say it is an acquired taste.

We learn that Louisiana – especially this region — is a festival capital with hundreds every year and the first night of this conference, we get a sample of the excellent local festival eats:

–Chicken and sausage gumbo at the Louisiana Fur & Wildlife Festival.

–Cracklins at the Marshland Festival.

— Jambalaya at the Sulphur Mines Festival.

Southwest Louisiana, which borders Texas, was considered “no man’s land” when it was first settled by refugees from Nova Scotia who of course became known as the Cajuns.

Caterer Marilyn Dowdy, meanwhile, tells me my next lesson will be making crab cakes.

The secret: “Get the best crab.”

From Louisiana of course.