Another perfect sailing day and did we mention we caught a Mahi Mahi? 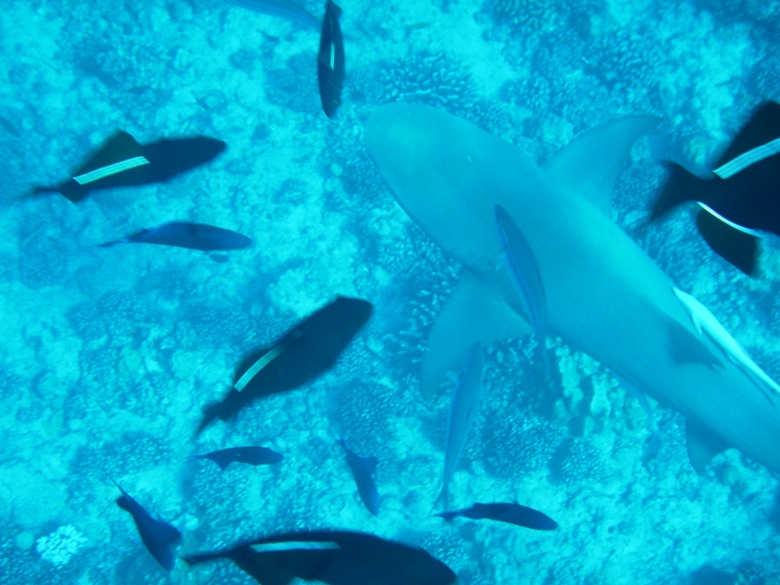 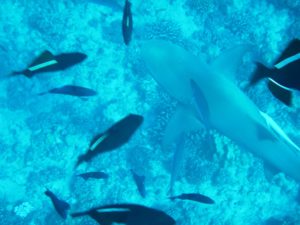 Lemon sharks under our catamaran off Bora Bora

DAY 5 — The sharks look like a bunch of kindergartners, squabbling over the last cookies in the bag.

We are just outside Bora Bora lagoon and it is even more beautiful than the guidebooks (and James Michener) say — majestic green cliffs, crystal clear water teeming with fish.

We’ve just caught a 16-pound Mahi Mahi! Amazing, we all agree. The line started to pull as we were sailing and all of a sudden our captain Turo and my husband Andy are right there, reeling in the gigantic fish. We can’t believe our luck! Turo tells us a fish this size would cost $70 or more in the local market.

Click: PHOTO GALLERY We watch as he skillfully cleans the fish and throws the skin, etc into to water near where black tipped reef sharks and even bigger lemon sharks, some as long as 4 feet, prowl around in circles waiting for their snack. We laugh at their antics. The gulls and frigate birds swoop in too. Turo tells the girls that they can get into the water with him and watch the shark swim under our boat. We all do that. What a sight! The sharks ignore us totally as they swim around. We snap photos with our excellent underwater Olympus camera. We laugh at how much others would pay for such an excursion.

That’s the thing about a sailing trip — you never know what will come next — generator trouble in paradise, catching a huge Mahi Mahi for dinner (we were planning on making pasta) swimming with sharks… nothing is scripted… nothing goes as planned and that is the beauty of a trip like this on a catamaran from Tahiti Yacht Charter (www.tahitiyachtcharter.com).

Earlier, we napped and watched the scenery in the sun as we sailed about three hours over relatively calm seas from Raiatea to Bora Bora — waiving at the occasional sailboat. Andy teased the girls that the Jonas Brothers were aboard another boat — of course they’re not.

We make our own fun — papaya banana smoothies made without a blender, card games, breakfasts we make and eat outside (why is it food tastes so much better on a boat, like when you are camping!)

We’d stopped in Raiatea to get the generator fixed (that took about 5 minutes) and then pulled up to the market like locals where we loaded up on baguettes longer than my arm, salami and ham and cheese, ice and ate lunch tearing off chunks of bread and cutting off cheese for lunch as we sail toward Bora Bora.

When we arrived, the local July Heiva festival is in full swing, the girls are excited to learn, and we’re greeted by some local 12 year-olds who, giggling, pose for pictures. We stroll down Bora Bora’s main drag — little more than a sleepy street with a few shops, some selling the ubiquitous black pearls, others selling tee shirts. The girls aren’t inspired to buy anything.

We head back to our boat for dinner — the Mahi Mahi is waiting.

Next: Taking in the local culture at the festival on Bora Bora