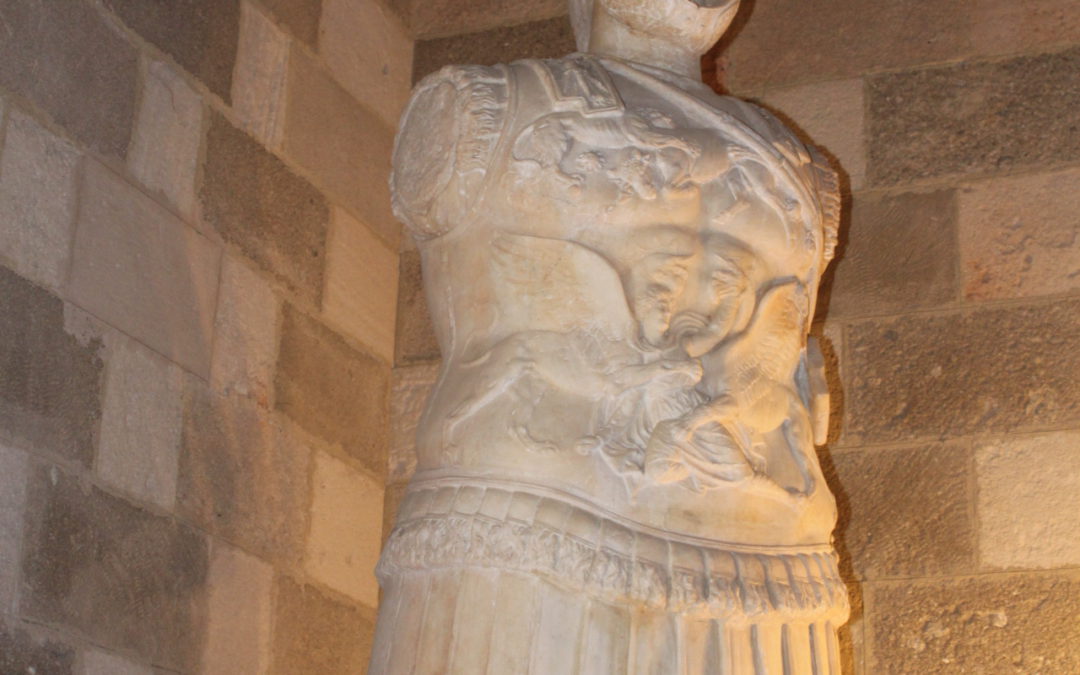 ABOARD THE CELEBRITY APEX, Aegean Sea — It was love at first sight.

Helios, the god of the sun, was flying around when he spotted Rhodos, the sea nymph, swimming in the Aegean Sea.

He was smitten and wanted to marry her. Meanwhile, according to Greek mythology, after Zeus’s victory against the Giants, he decided to divide the earth among the Olympian Gods. But Helios, so the myth goes, got nothing because he wasn’t at the celebration.

“What about me?” Helios asked Zeus. As a wedding present, Zeus used his thunderbolt to create a new island from under the sea where they lived happily, raising seven sons and a daughter.

Today, the island of Rhodes, part of the Dodecanese islands, is home to over 120,000 people and pre-covid as many as four million visitors a year, said our affable local guide George Triantifillis. Many on our ship, the Celebrity Apex, have opted to head to the island’s famous beaches.

We have opted for a Small Group Discovery tour from our ship. That means there were fewer people than on a traditional tour (just 14). Celebrity now also offers private tours, as we enjoyed in Athens before boarding the ship. Such tours, though expensive, have been very popular as cruising has resumed during the pandemic.

We first got an overview of the island from a bus, followed by a walking tour of this continually inhabited medieval town and the Grand Masters Palace, a huge fortification in the 1300s but was later destroyed in an 1856 explosion. It was rebuilt by the Italians when they occupied Rhodes in the 1930s, including spectacular ancient mosaics that were covered in wax, wood, and cement and brought from the island of Kos, to be laid on the floors of the Palace.

The Palace, we learned, was built at the end of the 7th Century around a large courtyard at the highest point of the medieval city within the walls of the medieval town. Much is a protected UNESCO World Heritage Site, though it is surrounded by shops selling all varieties of souvenirs and cafes. “Stay away from the cafes on the main streets” where tourists will be overcharged, we were warned.

The Knights of the Order of St. John, a group of well-born Roman Catholics from around Europe, built the palace and a hospital. They were forced to leave in 1522 when, after a six month long fight with the Ottomans, they retreated to Malta. Still remaining on the Street of the Knights are the inns where the knights lived. You can almost imagine them parading up and down the Street of the Knights, likely speaking Latin, their only common language as they came from all over Europe.

Archeologists believe that an ancient temple to Helios was here and likely where the famous 100-foot-high Colossus of Rhodes statue once stood, making it the tallest statue and one of the Seven Wonders of the Ancient World. It collapsed during an earthquake in 226 BC and centuries later, the Arabs sold what remained. Many believe the Colossus resembled the Statue of Liberty, with a crown on his head and an arm outstretched holding a flame.

In the 1920s and 30s, the Italians occupied the Island. They had an idea of how the Palace must have looked from pictures and rebuilt it to flatter their fascist dictator Mussolini. “The Italians did a great job rebuilding the Palace,” said our guide, noting there are 146 bedrooms. “They thought they were going to stay forever but they weren’t so lucky when the Allies won.”

Sadly, the renowned Jewish community that had lived here for more than 2,000 years at the southern tip of the Aegean Sea was decimated—first by those emigrating in the 1930s and then after the Germans occupied the island, when some 1,600 of them were sent to Auschwitz in the summer of 1944, just three months before the Germans were forced to leave Greece. All but 151 perished, according to the US Holocaust Memorial Museum. Today the community numbers around 50, who were getting ready to celebrate the Jewish New Year when we visited the historic Kahal Shalom Synagogue (www.jewishrhodes.org), the oldest functioning synagogue in Greece dating back to 1575.

There is also a small museum devoted to the history of the Jewish community here and the Square of the Jewish Martyrs, with a seahorse fountain and dedicated to those who were killed at Auschwitz.

It seems fitting somehow that we were able to visit as Jews around the world prepare to celebrate the High Holy Days.