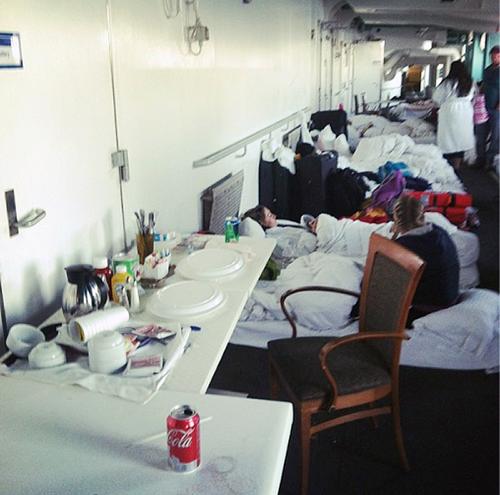 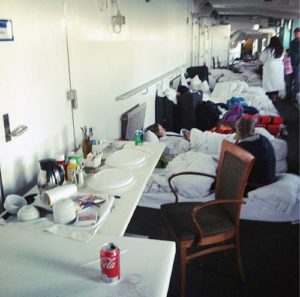 Aboard the Carnival Triumph-AFP Getty photo

All this past week, we watched the saga of the more than 4,000 passengers and crew stuck in abominable conditions aboard the crippled Carnival Triumph.  After an engine room fire, they spent 5 days adrift—longer than their Mexico cruise was supposed to last–without enough food, power or even working bathrooms.

It was hot and beyond miserable, passengers reported. “It smelled like a zoo,” one passenger was quoted as saying.  They were eating ketchup sandwiches.

But what I can’t understand is why the passengers were subjected to this ordeal in the first place.  The ship was disabled just 150 miles from the Yucatan Peninsula. Why couldn’t the passengers have been transferred to another ship right then?

“All of our ships are in service right now, meaning that we don’t have the cabin space to accommodate more than 3,100 guests.  Additionally, a ship-to-ship transfer at sea would be considered too risky,” said Carnival spokesman Vance Gulliksen.

Couldn’t another ship in port have been cleared and sent to the rescue, many of my readers wondered?  Or another cruise line come to the ship’s aid?  Couldn’t the navies or coast guards of the U.S. or Mexico?

Was evacuation really riskier than subjecting 4,000 people to a disease risk for five days without toilets working, even sleeping on sewage-soaked carpets—this when the Centers for Disease Control  reported 16 outbreaks of the debilitating norovirus on cruise ships last year, according to the NY Times?

More than 14 million people cruised last year, according to the Cruise Lines International Association, and cruising remains a fast-growing and affordable vacation option for families.  Carnival alone carries over 700,000 children on its ships a year.  Multigenerational groups gravitate to cruises because they are well-priced vacation options, mostly all-inclusive and there are activities for all ages—even day care on a growing number of ships for infants and  spectacular facilities and programs to keep teens and tweens happy and out of trouble.

But after this, just a year after the Costa Concordia disaster that killed 32 people (including one five year old girl and her dad), I would expect that those who the cruise industry most wants to woo—first time cruising families — are thinking they’ll vacation elsewhere.  Can you blame them?  And so far, the cruise industry hasn’t done much to reassure them.  Meanwhile, industry critics are saying there needs to be more regulation of such a fast growing industry.

The 14-year-old Triumph had mechanical troubles last month that delayed a cruise.  This time, the consequences were far worse after the engine room fire knocked out power. Fewer than two dozen public toilets were working for the 4,000 people on board. According to NBC News,  The cruise staff instructed passengers to urinate into the showers and put solid waste into plastic bags, which were regularly collected by room stewards and put into a giant trash bag.    One passenger compared the deplorable conditions to those at the Superdome after Hurricane Katrina, according to news reports.

I don’t think Carnival realized what a public relations disaster it has on its hands in this era of instant communication and a 24-hour news cycle, with passengers texting and tweeting until they ran out of power and their relatives talking to reporters nonstop.  “We pride ourselves on providing our guests a great vacation experience,” said Gerald R. Cahill, Carnival’s chief executive was quoted as saying last Thursday as he boarded the ship when it arrived in port.  “Clearly we failed in this particular case.”

That’s an understatement. Carnival really needs to work hard in the days ahead to restore trust.  That should start with a public explanation of how this happened and how it intends to prevent a recurrence (after all this is the second Carnival ship [Carnival Breeze] to be left adrift by a mechanical breakdown in the past three years).

But instead, Carnival has so far offered only to refund passengers the cost of their cruise, is busing them home and initially offered them $500 each. That seems to fall short.  Those on boards can’t get their vacation time back and are unlikely to forget their nightmare week anytime soon.  Who knows how many will get sick?  The passengers no doubt are thinking about lawsuits, though they likely have little chance of success because of all the travel documents they initially signed.

This is yet another black eye for the cruise industry on the heels of the Costa Concordia tragedy.  Costa is also owned by Carnival, the largest cruise company in the world.  The Concordia ran aground because the captain allegedly deviated from his planned route in a “show off” maneuver and struck a reef closer to shore. Even more egregious was his conduct afterward — apparently leaving the ship before all of the crew and passengers were evacuated. The evacuation, by all accounts, was chaotic. The accident shouldn’t have happened. Certainly no one should have died.  (Here’s what we recommend about how to make sure your kids know what to do in an emergency at sea.)

It is important to keep in perspective that the Concordia disaster and this latest debacle are by all accounts aberrations in an industry that prides itself on its safety record. Between 2005 and 2010, cruise lines carried nearly 100 million passengers with a total of 16 deaths related to marine casualties — less than .16 fatalities per million, the Cruise Lines International Association reports.

Still, the stories from the Triumph are enough to make even an experienced cruiser think twice.  The worst part is how powerless the passengers all were.  They couldn’t get off the ship.

Somehow $500 and a bus ride home doesn’t seem like it will cut it.