Aspen in the recession — there are pluses 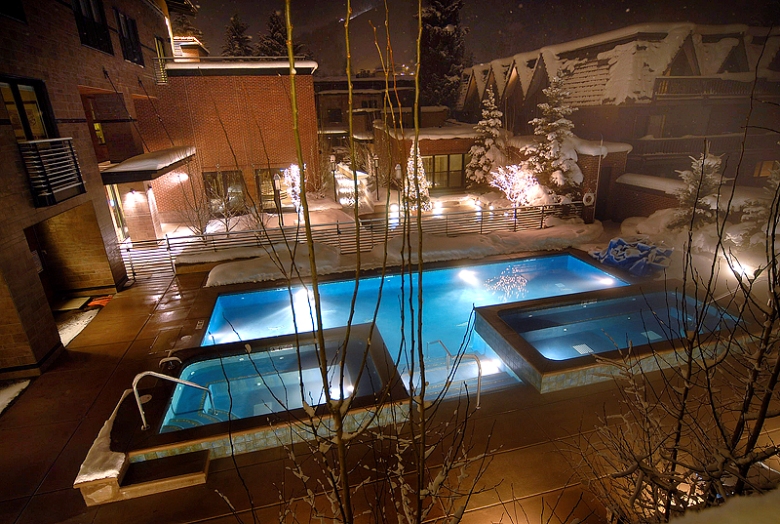 The pools at the Limelight Lodge in Aspen

Welcome to Aspen, CO with four mountains to choose from, a recreation center complete with water slide and climbing wall, and a free shuttle system that enable tweens and teens to get from mountain to mountain on their own with a minimum of fuss. Did I mention that every store is having sales (there are 250 to choose from)? And 100 restaurants (local kids hang out at New York Pizza and Boogie’ diner where my crew gave a thumbs up to the shakes)?

Yes, like every other resort in the country, business is down in America’s most famous ski town. The mountains aren’t crowded and you don’t seem to see as many flashy ski outfits either. It’s easier to get dinner reservations or a table when you want one.

But for those who are still skiing — and that includes plenty of locals — there is fresh snow, blue skies and sunshine.

We couldn’t have picked a better location for teens. The 126-room Limelight Lodge (www.limelightlodge.com) is across from Wagner Park, three blocks from the Aspen Mountain Gondola and an even shorter walk to Ruby Park Bus Depot, the departure point for free skier shuttles to the other three ski areas — Aspen Highlands known for its steeps and deeps; Snowmass, the largest of the four mountains with every kind of terrain, and Buttermilk, with its world-class terrain features as well as beginner terrain. There is even a free Max the Moose Express that transport kids to the ski and snowboard school at Buttermilk Mountain, less than 10 minutes away.

What makes this lodge unique is that it has been in the same family for 50 years. The original Limelight Lodge opened in the early 1950s as a three-room hotel, explained owner Dale Paas, a third-generation Aspenite who is at the helm of this family business that now employs his sister, brother in law, nephew and son, among others — the fourth generation in the hotel business.

The family rebuilt the hotel from the ground up, creating a comfortable space where families can gather for the complimentary breakfast and après ski snacks (including fresh baked cookies!). There is a fireplace and shelves stocked with board games. In their room, everyone finds a copy of local author’s Jill Sheeley’s “Adventure of Fraser the Yellow Dog” set here in Aspen, and Sheeley comes over regularly to read to the children.

There is an outdoor hot tub and heated pool as well as a small area for the kids with air hockey, foosball and computer games.

“We want the type of traveler who likes to be social, and where the kids can behave like kids,” Dale Paas says, surveying the après ski scene — parents sipping wine and nibbling cheese, kids gobbling the warm cookies. He notes that the kitchen is the center of everyone’s home which is why the “kitchen” — the bar area where breakfast is also served — is in the middle of the expansive lobby lounge area. “We want people to feel like kids can laugh and giggle and be like kids. We’re a family and this is a family atmosphere.” The Lodge loves pets too.

San Franciscans David and Phyllis Phillips have gathered their kids and grandkids — 10 in all — at the Limelight Lodge, where they’ve been coming for more than a decade. “I loved the old place too,” says Phillips, noting that the women in the family love that they don’t have to fix any meals. “We tried all the other ski areas,” he said. Then we came to Aspen and it has everything we wanted. And the Limelight is so homey.”

In this economy, it certainly doesn’t hurt that, while not inexpensive (rates during ski season can be upwards of $300 a night including breakfast and après ski snacks), the Lodge is considerably less than other Aspen hotels (check out the Buy Four/Pay for three deal!).

“We’re intentionally casual,” says Paas, noting that kids can eat pizza here while parents head out to dinner. He’ll regale you with tales of what Aspen was like 50 years ago — and its evolution from a booming silver town in the 1890s to a well-heeled hippie haven before it was discovered by celebrities. One day when he was a boy, he recalls looking over and seeing John Wayne at the next table at a chili joint.

Still, “This is very much a real town,” says longtime resident Tim Young, an Aspen ski instructor and father of a 12 year old son, who is showing me Aspen mountain.

On this particular day, my gang is on three different mountains. Twelve year-old Max Weinberg and his 14 year-old sister Eva are taking snowboard and ski lessons at Buttermilk Mountain (the transportation is so easy that the two will hop a shuttle bus back from Buttermilk to Aspen — a 10 minute ride that will land them a block from the hotel. My 17 year-old daughter Melanie is skiing at Aspen Highlands — the mountain known for its extreme terrain — with a friend from home who is visiting with his family. I can’t get over how easy the town’s free shuttle system makes the logistics!

Everywhere I meet people who are raising kids in this community — the couple who own the new restaurant Brexi next door to the Limelight, the ski instructors, a couple on the lift, the sales manager at a hotel. “There are a lot of real people here,” says Deborah Madsen, who is raising three kids in Aspen.

And unlike other towns, people have actively chosen to live here for the lifestyle — for the mountains in summer as well as winter, says Tim Young. “The energy you get from the outdoors is so great.”

No wonder despite the economy, everyone is smiling and upbeat.