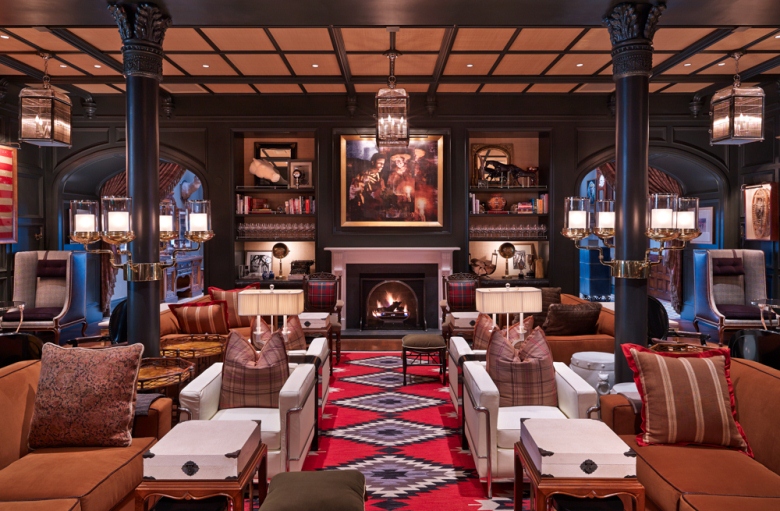 DAY 2 — Imagine when there were 15 bathrooms for 92 rooms—and that was a luxury.  Imagine when Aspen was a rough and tumble mining town riding the wave of the silver boom.

That’s when the Hotel Jerome was built—in 1889.  “Aspen has other big four star hotels but we claim the Hotel Jerome as Aspen’s hotel,” says Nina Gabianelli, vice president of the Aspen Historical Society.  This afternoon, she’s dressed in violet turn of the century garb for her twice weekly historical tours here.

The Hotel Jerome has just reopened before Christmas in the heart of downtown Aspen after a multi-million dollar renovation (every one of the 93 rooms and suites has its own luxurious bathroom, of course) and its not unusual in ski season for room rates to be over $800 a night.  But locals still gather in the J-Bar with its original tin ceiling and bar for drinks and lunch (the seven layer chocolate cake is amazing!)

“The Jerome is the essence of Aspen,” says Gabianelli, “The eclectic mix of people …it’s a face of the community.”

In the 1930s, she says, families lived here because they couldn’t afford coal to heat their houses in winter. Bathrooms weren’t added to all of the rooms until the 1980s. “I had a friend who lived here for $40 a week then,” she said.

Here’s a brief history: By 1888, Aspen had become a mini-metropolis in the Rockies and Jerome Wheeler, married into the Macy family of New York, agreed to finance both the hotel and the opera house.  He donated the land and loaned the developers—Kansas innkeepers who ultimately left before the project was finished—the money—the equivalent of 1.6 million.

The Jerome not only had indoor bathrooms but hot and cold running water, steam heat, an elevator still running today and the first west of the Mississippi to be fully lit by electricity.  It’s opening—the night before Thanksgiving 1889, was attended by New York Socialites, Chicago Beef Barons and European aristocracy.  Rooms were $3 a night.  With the growth of train travel, the Jerome was a must stop for touring socialites, stage stars and even Congressmen.

But with the demonization of silver and the crash, by 1910, most of Aspens mines—there had been more than 200 operating—were closed.  The population dwindled from 15,000 to fewer than 1,000.  In 1910, local business man Mansor Elisha offered the county that he would operate the bar and billiard room. Rates dropped to $10 a month including meals and the 50-cent Sunday fried chicken dinners kept locals coming.

Those who trained here for the 10th Mountain Division during World War II loved the historic mountain town and vowed to return.  They did and of course the rest is skiing history.  The longest chairlift in the country was built in 1947 to the top of Aspen Mountain.  It took 45 minutes to get to the top!

By 1946, Chicago businessman Walter Paepcke discovered Aspen while searching for a locale where overworked business leaders could revitalize themselves.  He leased the Jerome and renovated it—brining furniture from Chicago’s Palmer House that includes the mantle in the lobby today.

By the 1950s, movie stars like Gary Cooper and John Wayne were staying here. The Aspen Institute and Aspen Music Festival and even the Aspen Ski Company were founded here.

New owners renovated in the 1980s and 1990s and the hotel continued to be popular with locals though many visitors preferred to be at the base of the mountain.  Last year, Auberge Resorts took over and once again renovated melding 21st century comfort while staying true to the history.

“People love it,” says local historian Gabianelli.  “I’ve heard nothing but great things.”  There’s a small spa, an outdoor heated pool and hot tub and a restaurant that is focused on locally sourced foods open for breakfast lunch and dinner; the J-Bar serves freshly made soups, salads, and burgers.  I love that the snacks and soft drinks in the rooms are complimentary and sales and marketing director Connie Powe says the hotel plans to add more locally made snacks as well as a rooftop garden. There is a kids hang out room where foosball and ping pong are going to be added and complimentary activities après ski for kids are in the works.  I love the enclosed garden terrace which gets sunshine all afternoon—even in winter

Above my bed is a portrait of the Ute Native American chief because before Aspen was Aspen, it was Ute City.   Wonder what they would have thought about paying $800 a night!