At Deer Valley, the consensus seems to be no snowboarders 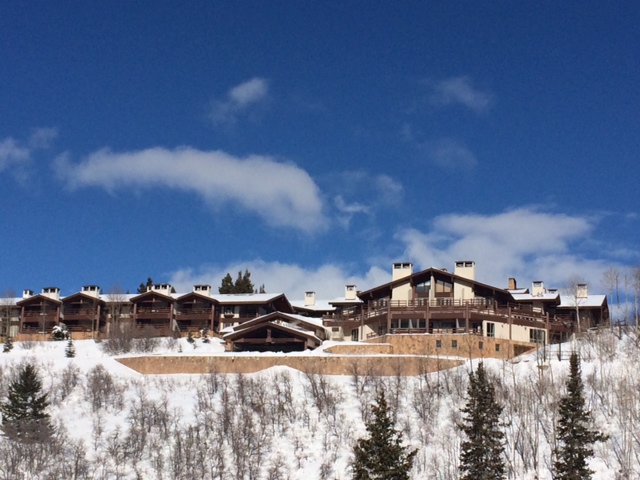 I know in snow country everyone wishes for the snow we’d gotten here in Utah the last few days—28 inches just in the last two days at Deer Valley Resort.

But I prefer blue skies to enjoy the long groomed trails Deer Valley is famous for.

The families I met here like Deer Valley—one of Park City’s three ski resorts— because of the groomed runs but more important, because there are no snowboarders allowed.  Deer Valley, in fact, is one of only three resorts in the country that don’t allow snowboarders.  The others are Alta, also in Utah, and Mad River Glen in Vermont.

“It’s less intimidating for the kids who are learning to ski,” said Jessica Willi, here with her husband Chris, five-year-old daughter and three year old son from Rhode Island.

Another plus for young families—all the help you get from Deer Valley staff, from carting gear to help getting on the lifts, she said.

“The snowboarders make me nervous, “ said Jane Clements, 10, here with her family from Los Angeles.

“This is paradise for a family,” added her dad Mike, adding that he used to snowboard himself but now with his three daughters, prefers the “pure skiing experience.”

“No hot doggers coming down the mountain,” agrees Lesley Fry, here with her family from near Gainesville, Fla.

In fact, that pure skiing experience—and the fact that this mountain never gets too crowded because only 7500 skiers are permitted a day– is what brings guests here, mountain officials say.  And if there are riders in the group—like my nephew and his girlfriend, it’s easy to shuttle over to either Park City Mountain Resort or the Canyons.  There is a public bus system; our Deer Valley condo offers amazing shuttle service—to the other mountains, the base of Deer Valley (a two minute ride) and into Park City for shopping or dinner.

The downside: We can’t all be together on this mountain.  We skied at Park City Mountain Resort and at Snowbird with them but I admit I don’t mind forgoing a little family togetherness to experience Deer Valley.  (Plus we’re trying on some new skis that were delivered — and will be picked up — directly from our condo from Skis on the Run, which makes it so much easier that visiting a big rental center.)

“The kids don’t see snowboarders so they don’t want to do it,” said Myles Tintle, here with his wife and two sons from Manhasset, NY.  “I want them to get competent on skis and then they can jump on boards,” he said.

Mya  Frantti, who oversees the larger children’s program here, thinks it is easier for kids—especially the little ones—to learn to ski without snowboarders on the mountain.  And if the kids want to learn to snowboard, Deer Valley can send them with a private instructor over to The Canyons or Park City Mountain Resort.

She notes that despite the price–$790 for a full day, $520 for a morning—60 per cent of the resort’s private lessons are taught to children—210 lessons a day.

Eighty per cent of the lessons taught at the resort are for children, she adds—more than 35,000 a season, as many as 1,000 kids a day during a busy week like upcoming Presidents Week holiday.

Many return year after year—and some end up working at the ski school, says Frantti who has seen these kids grow up over the past 19 years. “We’re passing on the love of skiing,” Frantti says, and teaching a sport that the family can enjoy together as the kids grow up.

Having seen many big ski school classes, I can’t say enough how much better kids do in smaller groups.  And while ski school certainly isn’t cheap ($230 including lifts, lessons, lunch for kids starting at age five; $205 for younger ones who don’t ski as much, but have an integrated preschool program) the program here is no more expensive than at other resorts that don’t  have such small class sizes.

Parents also like the healthy eats—think grilled chicken, veggie couscous and baked potatoes rather than the usual mac and cheese and chicken fingers.  The chicken tenders here are baked rather than fried.  And the ski school can accommodate all dietary requests—the whole place is nut free but they can serve the kids gluten free lunch and snacks, dairy-free or kosher.

Kids love all the little runs through the trees—Enchanted Forest, Oompa Loompa Land, Bucky’s Frontyard, among them. “I love the bumps in those runs,” said Jane Clements.

“When I get thirsty, I just eat snow,” offered Jack Fry.  “It’s so beautiful!”

No one can talk about Deer Valley either without mentioning the stellar food, which incidentally is no more expensive than other ski resorts but far better.  “The best lunch we’ve had this trip,” said Emily Ferguson, here with her husband and young son from Mississippi.

Those in the know  (including private ski instructors) opt to ski over for the skier’s buffet at Stein Ericksen Lodge, a real treat and worth $35 for adults ($19 for kids) . Think freshly carved turkey, flank steak, seared halibut, made to order Cobb Salads, local Utah cheeses and cured meats, shrimp and crab legs, the lodge’s famous wild game chili.

Good thing we are skiing all afternoon.