At Gleneagles, falconry is more than for the birds 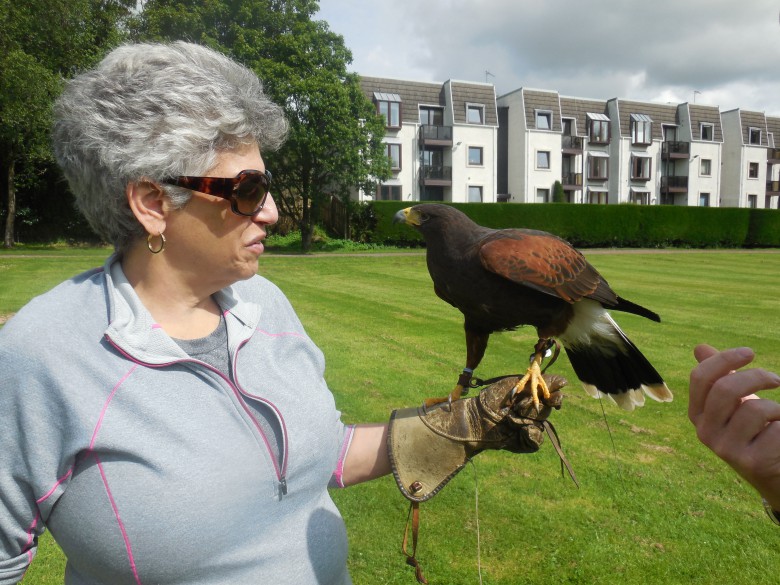 Eileen and Margo at Gleneagles

GLENEAGLES, Scotland — It all started because Emma Ford was a nosy kid.

New neighbors had moved in next door, she explained. “I peeked across the wall and came face to face with a falcon…I was mesmerized.”

She loved horses too, she said but her mother nixed the idea of a horse, allowing her to have a bird instead. “I trained my first eagle at eight. It is a passion and we are lucky to be able to share our passion with others here.”

Ford, with her husband Stephen, went on to found Britain’s First Falconry School in 1982 in England, moving it to Gleneagles in 1992.

“We haven’t looked back since,” she said. Today, some 4,000 guests each year learn the rudiments of the ancient sport here while another 4,000 learn off-road driving or how to command a gun dog.

Margo is my new friend.

Of course she can’t talk and she weighs less than 2 pounds. But she sure is fun. Margo is a Harris Hawk at the British School of Falconry here on the grounds of the historic Gleneagles Hotel, the first in the country and extremely popular with kids. In fact, we had an audience as I was learning to hold Margo and let her fly.

I learn that “hoodwinked” comes from the practice of putting a hood over a falcon or hawk’s head to calm them; “under your thumb” from the way you are supposed to hold hawk’s leather straps on your gloved hand, and “fed up” from when the hawks have eaten plenty of food and have no interest in doing anything. 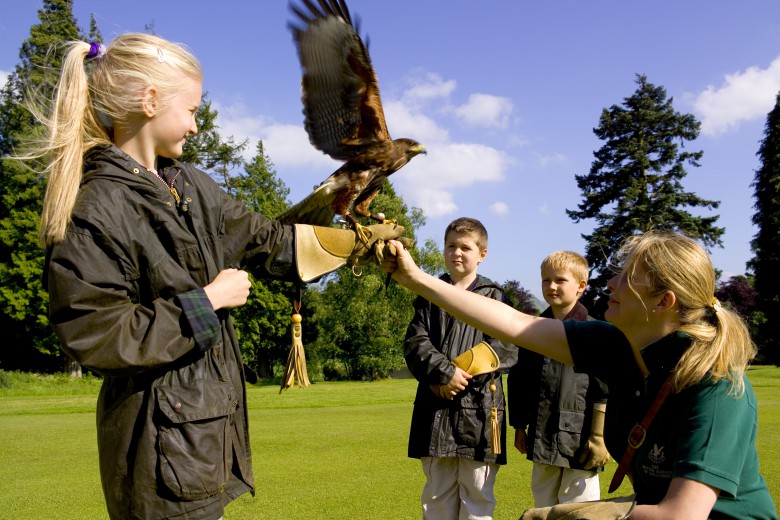 According to Ford, falconry is reputed to be the oldest sport in the world, likely originating in China around 2000 BC. Originally, Ford says in her book, it was devised as a way of obtaining game for the table but the pleasures of training the hawks prompted the westward spread of the art—falconry reached Britain as early as 860 AD and has been the sport of royalty. The sons of the gentry were taught falconry for the same reasons they learned swordsmanship—without its mastery they weren’t thought to be properly educated. There was a respected post of the Royal Falconer. King Richard II created the Royal Mews for housing his falcons

By the start of the 19th Century, Holland had become the focal point of the sport but various clubs were formed in Britain. The definition of Falconry today is the taking of wild quarry in its natural state with trained hawks and falcons.

World War II also put the kibosh on the sport in England, Ford said, as so many falconers left to fight. But it is making something of a comeback—the British Falconers Club has some 2000 members and there are a dozen falconry schools in the UK and others in Ireland, including at Ashford Castle.

“Falconry is the most popular activity we have,” said Ford. “Guests come back again and again and ask for the same Hawk.”

More young people are interested, though there tends to be more interest among men. “It is a unique partnership between bird and man,” Ford says.

She adds that Harris Hawks traditionally work as a family team making it easy to have more than one bird at a time and most importantly—they get on really well with people.

Kids she says are fascinated. Some come back every day of their visit. Especially Americans. “They are the most curious,” she explains.