At Jicaro Island Ecolodge, sustainability is a passion 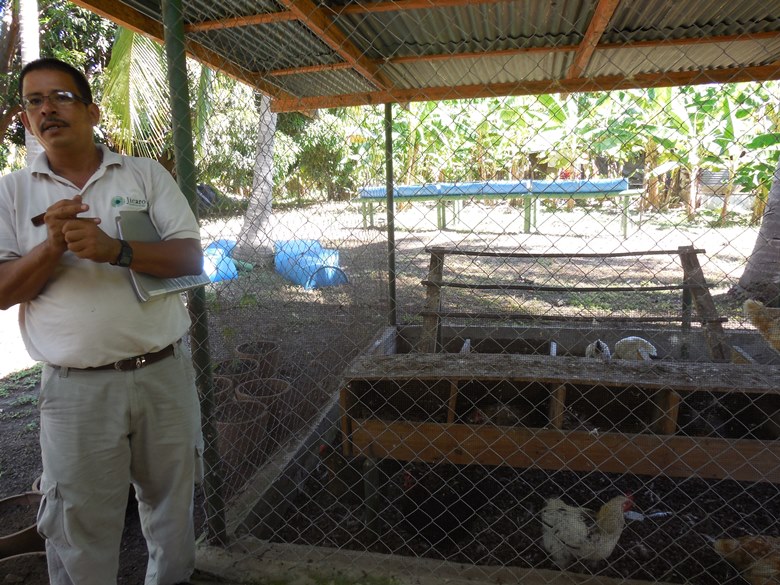 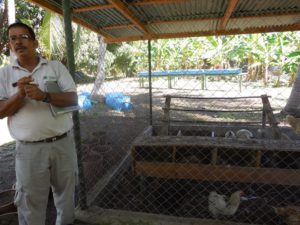 DAY 3 — The farm, at first, looks like any other small family operation in Nicaragua—pigs suckling their piglets, chickens—fruit trees, plantains and coconuts.  Let’s not forget the kids running around playing.

But a closer look and you see this is a unique partnership with the nearby Jicaro Island Ecolodge, just three years old and, from the beginning, committed not only to sustainable practices but to helping its neighbors on Lake Nicaragua.  Jorge Lopez gives us a tour starting at the lodge where we are staying a short boat ride from Granada.  Some of the wood used in constructing the resort was reclaimed from a 2007 hurricane; solar panels over the kitchen heat the water we use for showers.  Lake water is filtered and used for everything from drinking water to pool—all the water on the island is from the lake.  The small pool, he tells us, is cleaned organically, not with chemicals.

Herbs are growing for the kitchen.  As for the farm, the scraps from the kitchen feed these pigs whose sale supports the families.  The chickens now supply about a third of the eggs Jicaro uses each day, Lopez explained, and the plan is to expand the hen house.  There are seedlings for a vegetable and herb garden and methane produced by the pigs’ waste now provides cooking gas for three of families—so they no longer are chopping down wood to burn to cook.

There are also plans to raise money to provide solar panels to nearby Padre Nello School that has no electricity.

The resort gets its plantains, coconuts (yesterday was coconut day so we were served coconut water fresh in giant coconuts), mangoes, oranges and avocados from the farm as well. 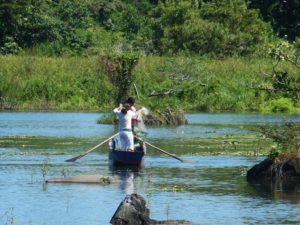 Handicrafts made by women in remote villages are sold here, and on the menu it explains where the food is sourced locally—beef from Nuevo Carnic produced without hormones in a FDA approved plant; organic cow cheeses from another purveyor, jam made from organic jellies.

I like that the menu also explains the local foods.  You would be hesitant about trying street food in a country like Nicaragua but here at Jicaro you can safely sample Pollo “tapado” chicken stew with potatoes, rice, red beans and slaw salad or “Vigaron,” slow baked, lightly fried pork with yucca mash with local chili on the side.

The owner Karen Emanuel, says food is important to her and it shows—from the open kitchen to the thoughtful locally sourced menu—I had fresh sea bass with eggplant for dinner; there were plenty of veggie offerings (my daughter had a Caribbean veggie gumbo with coconut milk.  We shared plantain Latkes (it is almost Hanukah after all).

Gallo Pinto—the national meal of Nicaragua– is onions sautéed with smashed beans and rice and it’s delicious.  There is also the typical Queillo—street food–a tortilla with cheese, onions and chilies.

It’s rare, say guests Karen and Neil Agron from Chicago, that you can be at such a comfortable and remote spot but be so close to so many of the country’s attractions—volcanoes, hot springs, the colonial city of Granada—all smack in the middle of the huge and pristine Lake Nicaragua dotted with some 365 islands.

Still, they say, it’s not for everyone.  There’s no air conditioning or TV… We haven’t missed either, thanks to the ceiling fans.  A small place like this is also conducive to good conversation—with our daughter who has been working in Nicaragua, our first time together in several months, or with other guests we meet.

But I can’t stop thinking of the four young children we meet at the pig farm and the school children who danced for us the other night.  In some ways, I know this resort is making their future better.  I like to think in a small way, we’re helping.