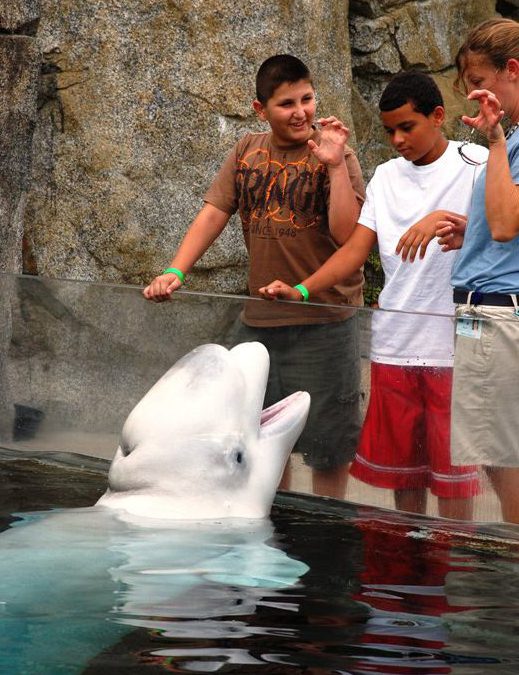 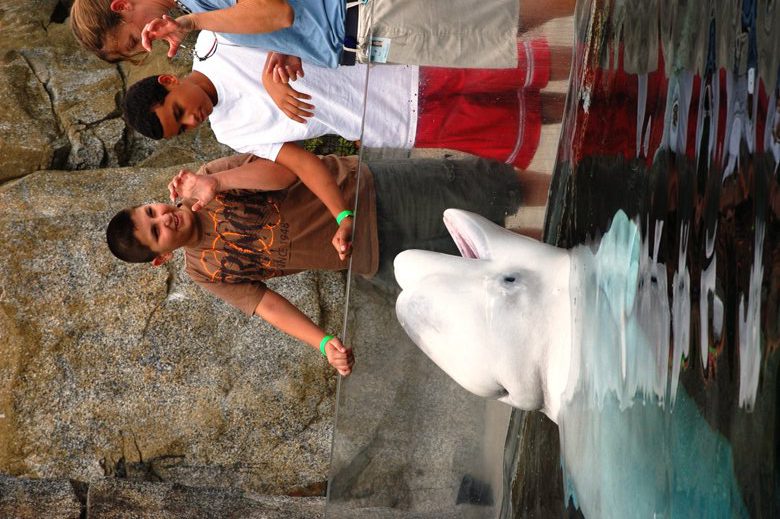 Enesi and Jason interact with Juno the Beluga at Mystic Aquarium

Maybe that’s because instead of a cantaloupe or honeydew, I’m gently squishing the top of a 1,400 Beluga whale’s head called a melon that is a combination of muscle and fat that enables eight-year-old Juno to direct sound. He’s able to use ricocheting sound from his “melon” to figure out his location, where food is and more.

He’s a cutie, preening for us as part of a Whales Up Close encounter at the Mystic Aquarium, which with 700,000 visitors a year is not only a world-class aquarium and research institution but Connecticut’s largest non-casino attraction. The Aquarium, we also learn, is home to the Institute for Exploration founded by famed oceanographer and National Geographic Society Explorer-in-Residence Dr. Robert Ballard, widely known for his discovery of the R.M.S Titanic wreck at the bottom of the Atlantic Ocean. Visitors can learn more about the scientists’ discoveries at the ever-changing Challenge of the Deep exhibit.

There are penguins, sea lions, seals,  a seal rescue clinic, an  interactive Australian Bird exhibit (feed the parrots!) jelly fish, clown fish, star fish and much, much more–  nearly 5,000 specimens—and the place is packed with families on a Saturday afternoon.

It’s easy to see why Juno, one of the aquarium’s three Belugas, is a star here and a YouTube sensation—the video of him “dancing” to a Mariachi Band earlier this summer has garnered more than a million hits!  We pat his huge tongue and check out his teeth while trainer Kim Cummings feeds him fish after fish which he swallows whole—an entire bucketful by the time we’re done. He’ll eat at least 40 pounds of fish by the time the day is over. He’s a growing boy, after all –just like Jason and Enesi,  the two 12-year-old boys who have left  New York’s inner city, courtesy of the Fresh Air Fund to spend a week with us.

We wanted to show the boys a place they’d never been and somewhere quintessentially New England, since they are spending 10 days in Connecticut.  Mystic, about than two hours from New York, is another world to them and boasts not only the world-class aquarium but Mystic Seaport , the recreated 19th Century coastal village with historic ships, a working preservation shipyard  and other exhibits.

We start our day at the Seaport, which incidentally is also an education and research center as well as a fun place for a family set along 19 acres along the banks of the Mystic River.  Since the 1600s and until the early years of the 20th Century, this area has been a center of shipbuilding—more than 600 vessels were constructed here between 1784 and 1919 and that continues today with one o the world’s only preservation shipyards.

The boys climb aboard the ship currently being restored—the Charles Morgan, built in 1841 and the last surviving wooden whale ship. It’s huge—over 105 feet long and 17 feet wide. We try to digest what it must have been like to leave home for as long as five years to capture 50 whales to fill the ship’s hold with barrels of valuable oil.  We learn the project still has a couple of years to go before the ship is finished.

Here at Mystic Seaport, also home to the nation’s leading maritime research facility, skilled craftsmen use 19th century tools and techniques to preserve the Seaport’s  unparalleled collection of historic wooden ships and boats—four vessels are designated National Historic Landmarks– as well as build authentic recreations of the famous vessels such as Amistad. It’s  famous for the  1839 slave uprising on board that ultimately led to a widely publicized 1841 US Supreme Court Case affirming a lower court ruling that because the international slave trade had been abolished, the captives were  not legally slaves but free. The Court decreed they were entitled to take whatever legal measures necessary to secure their freedom, including the use of force. Supporters arranged transportation for the Africans back to Africa in 1842. The case influenced numerous succeeding laws in the United States.

So many teaching moments here!  (For younger kids, there’s a Children’s Museum and there’s also a Planetarium that gives visitors a lesson in celestial navigation and there are special live-aboard sailing programs as well.) Enesi and Jason clamor aboard the Amistad and try to imagine what it must have been like to be taken from your home in chains and readily understood why the slaves rebelled when they had the opportunity.  At the interactive Discovery Barn, they pull weighted ropes, trying to imagine the hard work being aboard one of these ships entailed.

There are musicians, storytellers and craftspeople throughout the Seaport helping to bring this seafaring history to life—blacksmiths, woodcarvers, boat bulders. We go for a sail on a small 19th Century sailboat—the first time the boys have ever sailed.  We watch an interactive story about a girl who disguised herself as a boy and stowed away on a whaler. We see the huge figureheads that decorated old ships and  learn how sailors navigated using the sun, the stars and sextons (no GPS! No computers!)  We tour a tattoo exhibit that explains how important tattoos traditionally have been to sailors. The boys are only sorry they can’t get one!

When it’s time for lunch—at Latitude 41 Restaurant at the Seaport  we cajole the boys to try some things they’ve never tasted –clam chowder, oysters, calamari and crab cake, though we also order burgers and fries. The chowder and crab cake are winners, they decide.

But meeting Juno—and patting his tongue– at the Aquarium is clearly the high point of an action-packed day the boys agree.

As for me, I don’t think I’ll look at melons the same way again.