At Snowmass: SO MANY CHOICES FOR THE SWEET TOOTH 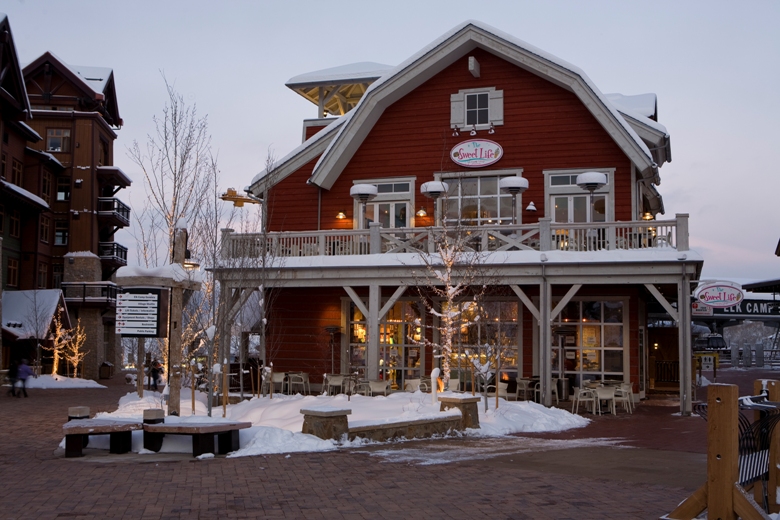 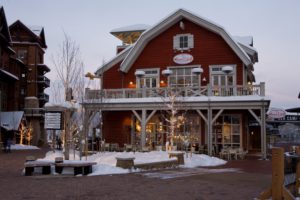 SATURDAY (February 21) – It’s our last day in Colorado ski country this year this year. Here at Aspen Snowmass there are too many choices! Do the kids want milkshakes or sundaes after dinner, a bag of candy (there are 80 different kinds to choose from), a big cupcake with pink frosting or a giant brownie? Each in our gang chooses something different. (www.aspensnowmass.com).

I can’t think of a better place than The Sweet Life for the bottom of a family mountain like Snowmass, by far the largest of Aspen’s four mountains and family-central with the year-old Treehouse Adventure Center that is ski school central for young kids. Jen Hayes opened her second The Sweet life (the first is in Telluride) in Snowmass’s new Base Village and it’s not only perfect for this mountain but for this economy. We can all manage to splurge on something small, like a bag of gummies or a sundae or a candy-inspired cocktail (how about Gummi Berry, cherry infused Vodka, Cranberry sauce and Blueberry Sparkling soda?). “It’s a feel good environment,” explains Jen. “Skiing is expensive and we wanted to offer good food and a good time that wasn’t too expensive. It’s about you feeling good and having a good time with your family.”

Even her in tony Aspen, families are watching their wallets carefully. Dr. Mike Maxwell, from Phoenix, AZ proudly tells me on the lift how he managed a four-day ski trip with his two teenage sons for under $1000. They alternated less expensive ski mountains, stayed at a hostel in Glenwood Springs, a out forty minutes from here, and opted for cheap eats. They drove instead of flew too. “Everyone had their tasks along the way. It’s an adventure to do it together,” he said. Besides, he added, you only have your kids for so long before they are off living their own lives and while you have them, “Time like this is great.”

Other families told me they flew to Denver after shopping for a cheap flight — a three to four hour drive away — to save on plane tickets;, used credit card points for the car rental, and are bunking with family or friends, eating in rather than restaurants. “ Mary Anne Cooke, from Lancaster, PA, was glad that her six year old — the youngest of three — could still ski free on Aspen’s mountains and was investigating the fifth grade passport that permits fifth graders to ski free across the state. They bypassed ski school this year to save more money and they give Snowmass thumbs up because it has so much varied terrain. Cooke Family Rule: All three of the kids, who range from 11 to six — must ride the lifts with mom or dad.

“It’s a lot of time and money — but cheaper than Jamaica, their other option,” she said. “But it is worth it. It’s great family time.”

I think so too watching the five cousins who range from my just-turned 18-year old daughter Melanie to 4 year-old Hannah play together. The three older ones live in Connecticut; the two youngest in Colorado. They don’t see each other that often and watching 12 year-old Max roughhouse with his two younger cousins or teach 6 year-old Ethan the fine points of a video game, or 14 year-old Eva read Hannah a story, makes all the hassles and expense worthwhile to me.

Another plus: While the two youngest are in ski school and 12 year old Max is in snowboard school, Eva and Melanie spend the day skiing double blacks with Jayme, Ethan and Hannah’s mom. They wouldn’t otherwise have such time together on equal footing with a 30-something, talking on the lifts, joking. And because of the wonderful layout of this mountain, I can ski groomers and meet them to ride the lifts together. I like this place!

So does Brooke Peterson who grew up here and, though she lives a lot closer to Tahoe ski areas, brings her two young sons back every year. Of course it helps that she stays with her mom and had enough airline miles to cover their flights. “I recommend this mountain to all of my friends,” she said. “It’s not crowded.”

The best part: the shuttle bus system so she’s not lugging kids — and car seats — in and out of vehicles all day. The kids love riding the buses, she adds. “It is so much easier than anywhere else. The whole bus thing changes everything with kids,” she adds. “They hop on and feel s0 grown up.”

Her kids are Just as happy off the mountain as they spend the day at the Aspen Recreation Center with its waterslide and indoor pool, rock climbing, ice rink and sledding. And at $14 per child ($16 for adults) it’s a lot cheaper than a lift ticket.

“We’ll be back next season,” Peterson says.

Our last day in Snowmass was probably our best. Not only was it one of those rare perfect blue-sky days with ideal snow conditions, but each of the kids reached a milestone of sorts. My daughter Melanie celebrated her 18th birthday the night before by heading out to an Aspen club that welcomes teens along with a friend from home and some new friends from Aspen High School.

Fourteen year-old Eva Weinberg proved she no longer needed ski school and was confidently exploring all of the expert terrain Snowmass had to offer (and there was plenty!) with her aunt and older cousins.

Twelve year-old Max Weinberg, who had never been on a snowboard before our trip to Colorado, was confident enough on his board that he was learning to do tricks. “Awesome,” his instructor said at the end of the day.

Six-year-old Ethan Sitzman used poles in his ski school class for the first time, while his four year-old sister Hannah navigated intermediate terrain with her instructor all day.

We ended the day with a snow cat ride up to the Lynn Britt Cabin , a small cozy log cabin where the grownups feasted on steak and the kids chowed down happily on chicken fingers and pasta. We were entertained by a guitarist strumming Western tunes. We played tic tac toe in between courses with the little ones.

The kids thought the best part was the snow cat ride up and down the mountain slope.

I thought the best part was seeing all the kids — who ranged from 18 to four — having so much fun together.