At the Cal Academy of Sciences 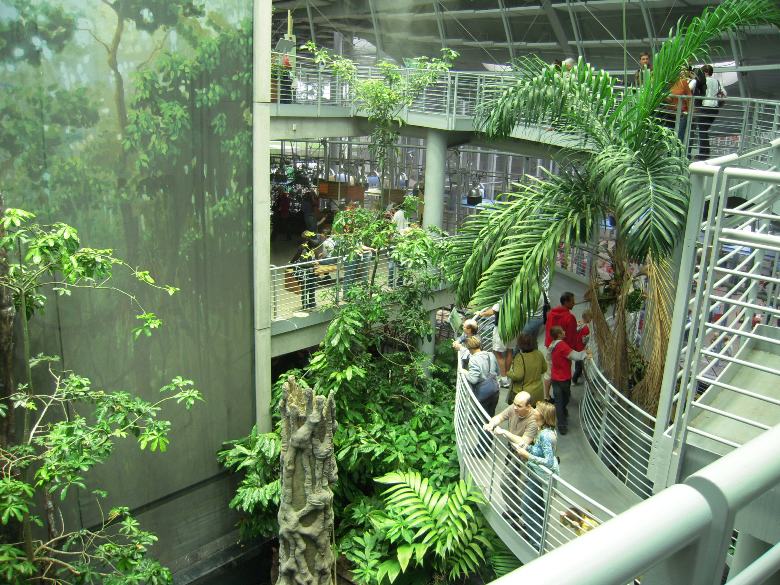 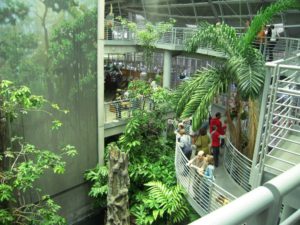 Inside the rain forest at the Cal Academy of Sciences

We’re at the California Academy of Sciences (www.calacademy.org) in Golden Gate Park in San Francisco which in the year since it has reopened has emerged as San Francisco’s top cultural tourist attraction, drawing more visitors than even Alcatraz.

Watch a brief video of the Cal Academy aquarium HERE Not only that but visitors stay a lot longer than at other science museums, California Academy officials say, and it’s easy to see why. The Academy — which incidentally is the greenest museum in the country with a 2.5 acre living roof—is a combination aquarium, planetarium, natural history museum and world=class research institution all under one roof. “It really works and the kids are entertained,” said Lisa Hungate who had brought her three kids and a cousin from Carmel for their first visit.

“Really cool,” reported Zander Vdovkin,12, who was sitting under a glass where the fish were swimming.

On Columbus Day, the Academy was teeming with parents, grandparents and kids of all ages, some of who were doing the creepy, crawly scavenger Hunt. So who is the flapping creature of the night who lives in a cave in the Borneo Rainforest? Answer: a bat. Incidentally, of more than 1000 different kinds of bats, only three drink blood and none of those live in North America. What Flesh-eating fish is hiding just below the surface? A: Piranhas, which might eat a large animal if they find it dead but are more likely to pick on insects, worms and smaller fish. What ghosts haunt the waters of North America? A: Moon jellies!

Everywhere you look are areas to engage kids and the adults with them — from the Albino alligator just at the center when you enter to the huge skeleton of the blue whale hanging overhead — 80 feet long! “It’s very easy to navigate,” says Deidre Arauju visiting for the first time.

You can measure impact of your every day decisions on a carbon scale — ask naturalists about your latest “discovery” from your neighborhood or get up close and personal with creatures who live thousands of miles away. Ever see a blue gecko? A green snake so skinny it looks like a vine? Sea dragons that are camouflaged by tiny leaves all over them?

“I like that all the animals are real,” said Gisele Araujo, who is nine and visiting with her mom from Alameda. In fact, animals are integrated throughout the museum — from the Rain Forests of the World, where Macaws and butterflies zip around overhead and there are croaking frogs, a bat cave, even long lines of leaf cutter ants as you wind your way through rainforests of Madagascar to Costa Rica to the Amazon.

In the Philippine Coral Reef, check out the world’s deepest living coral reef tank with 2,000 reef fish. See what the Academy scientists chose as their favorites in an ever changing exhibit — everything from an electric blue gecko to a waxy monkey tree frog that not only looks like wax but swings like a tiny monkey to a tiger shark that is considered a “swimming garbage can” for all that he eats (license plates, even!)

Parents and kids sit cross legged on the floor watching the swimming penguins in the African Hall. The 38,000 animals of the Steinhart Aquarium are found throughout the building, as are Academy scientists and volunteers who provide hands-on learning opportunities throughout the museum. Deirdre Arauju, visiting with her daughter was especially impressed with the volunteer efforts to engage the kids. “They were really looking to see what my daughter was interested in.”

The youngest museum goers can explore a 15-foot “research schooner” or tend a mini organic garden, even crawl into a “burrow” or dress up in costumes at the Early Explorers Cove while you can encourage kids to bring in their leaves, shells, rocks and more for naturalists to examine at the Naturalist Center.

Fly into space at the world’s largest all-digital planetarium where there is a new space show narrated by Whoppi Goldberg.

I especially loved visiting the California Coast, an exhibit that is devoted to the state’s marine environments. Ever hold a hermit crab? There’s a Discovery Tidepool.

Look down into The Swamp tank — here you’ll find the albino alligator as well as snapping turtles, snakes frogs and salamanders nearby. It’s great that you don’t have to choose between a visit to the aquarium, planetarium or natural history museum — that you can do it all in one place and when the kids need a break, you can head to The Living Roof — a 2.5 acres of native California plants which not only provides insulation, prevents storm water runoff, keeps the building cool but creates a habitat for native birds, butterflies and bugs. If you look closely, you’ll see the seven hills of the roof mimic the hilly topography of San Francisco.
And when the kids need a break, head out into the park right outside where you can have a picnic, toss a ball, or turn a few cartwheels. “Really fun,” said 12 year old Patrick Hungate.

I thought so too.